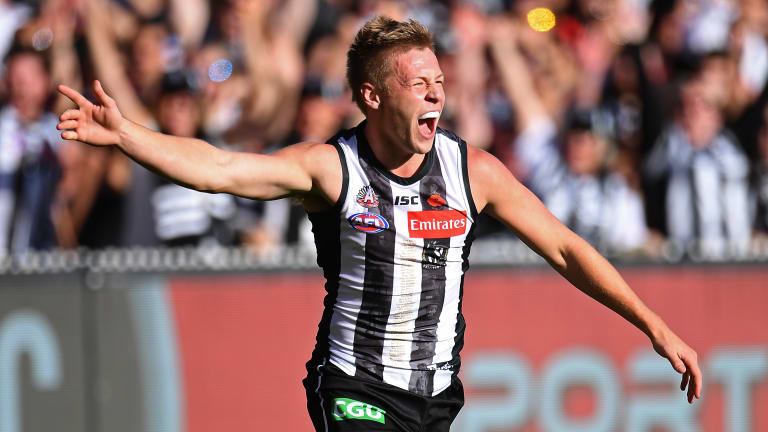 If the concept of a rampant Richmond isn't enough, we now to have consider the possibility that Collingwood – dormant for the past four seasons, out of the finals and largely irrelevant – might also be experiencing an awakening of sorts.

In an underwhelming Anzac Day game, the more skilled Magpies – that's right, more skilful – comprehensively routed a mediocre and injured Essendon in a match that, like the Melbourne-Richmond one the night before, was not within cooee of the Anzac-themed occasion.

In fairness to the Dons, they faced Hunger Games odds from the middle of the second quarter when they were down two players, as James Begley suffered a knee injury and Josh Green pinged a hamstring.

That said, the game was already taking an ugly shape for the Dons, who had terrible trouble not only with executing basic skills, but with moving the ball with any purpose or composure against a reinvented and impressive Collingwood defensive game style.

In four short days, we will learn more about the mettle of Nathan Buckley's team – and whether they're a clear and present danger to the top sides – when they meet the Tigers, a match that will probably produce the largest crowd yet seen in the unfashionable 3.20pm Sunday time slot.

Two factors were decisive in Collingwood's canter to victory.

The first was that the Pies handled and moved the ball with greater surety. The second was that their defensive actions completely snuffed the Bombers.

Essendon managed just seven goals, and only four after quarter time. On many occasions, the Dons players would have possession behind the ball, look up and then pause, seemingly without any viable option. Eventually, there would be a turnover.

The Pies did not play with particular flair. They just made better decisions with the ball with much greater frequency and – in what is a credit to Buckley and his revamped coaching panel – had a method that the Dons found difficult to score against.

No player personified Collingwood's superior composure more than its skipper, Scott Pendlebury, who hitherto this season had found himself eclipsed as a prime mover by Steele Sidebottom and Brodie Grundy.

In stark contrast to many Bombers, who either rushed their disposals or were too ponderous, Pendlebury made excellent decisions with the ball, either by foot or hand the skipper was well supported by Sidebottom, the most influential player afield in the first quarter, and Adam Treloar, who eclipsed Pendlebury and Sidebottom in both the possession tallies and in the voting for the Anzac Medal. Any of that trio might have won the medal, but it was Treloar's stronger finish that seems to have given him the nod of the judges.

Treloar also provided a rare highlight in a game that contained relatively few for the non-Collingwood purists, when he booted a long, running goal in the second quarter, as he and Jack Crisp run down the field together, exchanging handballs, as if they were breaking from the peloton.

Collingwood owned the midfield, despite the anomaly of Essendon having a statistical – as opposed to actual – advantage in the clearances (34-25). The Don clearances were not really clear.

Elsewhere, the ageing warhorse Lynden Dunn managed the improbable feat of restricting Joe Daniher, albeit Daniher was undone by his woeful kicking as much as by the discarded Demon defender.

For the Dons, Zac Merrett was effective early, but faded, with his team. Darcy Parish worked hard. David Zaharakis won the ball, without bursting into space in a threatening manner.

Collingwood's ascendancy was gradual and became more and more pronounced from time on in the first quarter. By half-time, while the margin was just 17 points, the game had taken a form that meant it was difficult to see the Dons challenging the Pies, much less getting up.

By the final quarter, the Dons were exhausted – their losses having told – and Collingwood's Mason Cox was taking full advantage, plucking a couple of towering pack marks and booting his second goal. Perhaps the most exciting moments, though, were provided by youngster Jayden Stephenson, whose acceleration – and willing to use it – stood out.

Sidebottom booted two superb goals in the first quarter, one from a clever soccer in which he out-manouevred his opponent, in a similar manner to Jordan De Goey's opening goal, an athletic soccer volley with an even higher degree of difficulty.

Even early in the match, there was a clear shape to the contest. Collingwood held a territorial edge, via their midfield (despite Essendon winning the clearances), and the Dons would get numbers back and rebound – a pattern reflected in the huge amounts of the disposals to Bomber quarterback Brendon Goddard.

Later in the game, Goddard would have heated words with his team mate David Zaharakis in a dialogue that reflected the Bombers' lack of cohesion when they had the ball, and he followed with what looked like further sprays to team mates at the three-quarter-time huddle.

Sidebottom's second goal came after an interesting score review in which the video expert had two possibilities for overturning the goal – the first that it might have been touched by Michael Hurley (as Hurley insisted), the second that the ball had actually hit the point post before Sidebottom swooped – yes like a Magpie – and snapped.

The game finished with a flat feeling, in defiance of the fact – surprising as it is – that the Pies have won three on the trot.

On Sunday, we'll learn more about them, when they confront another team that, like them, had been 13th and subject to an intensive review a year earlier.