Collingwood have overcome a knee injury to Diamonds midcourter Kelsey Browne to boost their Super Netball finals hopes with a 64-56 win over ladder leaders NSW Swifts in Launceston.

Picking up seven points from Saturday's upset win, the Magpies jumped into fourth, six points ahead of the Giants, who play the Thunderbirds in Adelaide on Sunday. 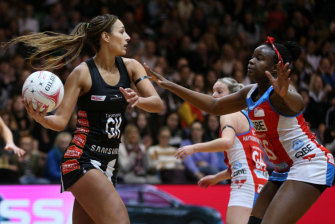 Geva Mentor of the Magpies (left) under pressure from Sam Wallace. Credit:AAP

The Swifts failed to pick up a point for the first time this season and will drop to second if the champion Sunshine Coast Lightning beat the Vixens in Melbourne, also on Sunday.

Browne went down clutching her left knee shortly before halftime and was assisted from the court in obvious discomfort. 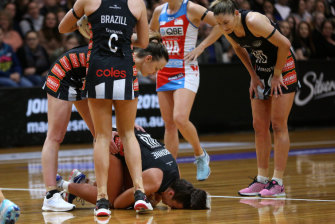 Kelsey Browne of the Magpies injured during the Round 13 Super Netball match.Credit:AAP

And at the defensive end England international Geva Mentor and April Brandley both pulled off some big plays to thwart the Swifts attack.

The Magpies victory was particularly poignant for coach Rob Wright, who missed the match after his mother died on Friday night.

They led by seven in the first quarter and by eight during the second and while Swifts levelled early in the third, Collingwood regained momentum and pulled away.