Manchester City 2-1 Bournemouth: David Silva scores one and assists another to leave Cherries in trouble 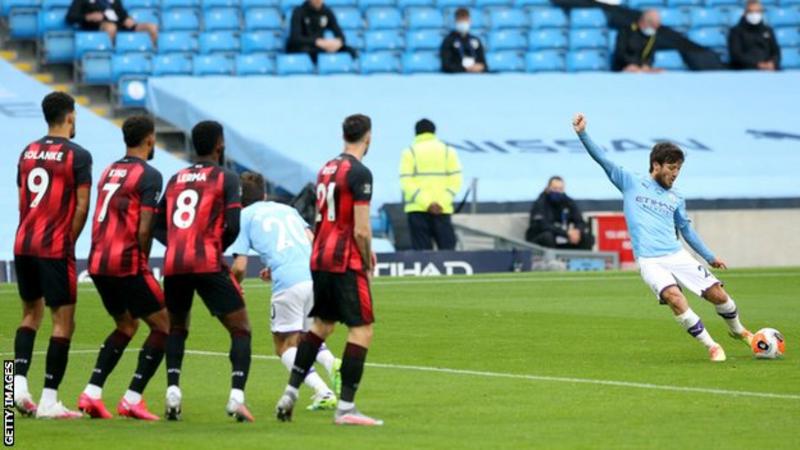 “It’s difficult at this stage to cling to positives because you need results and points over everything,” said Howe, who has been Cherries manager in each of the top four divisions.

After Bournemouth had seen a series of chances come and go, David Brooks’ late strike gave them the hope of an unlikely point at Etihad Stadium but they fell short of another comeback to boost their fading survival hopes.

David Silva had put City ahead with a superb free-kick after just six minutes, curling in from the right-hand corner of the box via the underside of the bar.

Pep Guardiola’s side had scored five times in each of their previous two outings but, in their first game since learning their European ban has been overturned, they did not seem in the mood to punish their opponents further.

Instead it was Bournemouth, fresh from their remarkable comeback to beat Leicester at the weekend, who threatened a repeat of that recovery here.

The visitors went close in the first half when Ederson had to push Junior Stanislas’s whipped free-kick on to his post, and was fortunate when the ball bounced back off his head and out of play.

Soon afterwards, City’s Brazilian goalkeeper needed the help of Nicolas Otamendi to deflect Dominic Solanke’s goalbound shot over the bar, and Philip Billing headed over from the resulting corner.

Bournemouth were on top and appeared full of confidence, but they were left to rue their wastefulness in front of goal when Gabriel Jesus struck City’s second before half-time.

There were five defenders around Jesus when he collected David Silva’s pass inside the box but he beat two of them with a step-over and a dart into space before planting his shot into the bottom corner of the net.

Even then, the Cherries were not done but when they did get the ball in the City net after the break, it was ruled out for the most marginal of offsides.

Stanislas cut back inside the box and bent the ball past Ederson but Joshua King was flagged offside after applying the final touch at the far post, and the video assistant referee confirmed the decision by the width of his big toe.

It appeared City would get the chance to wrap things up from the spot when Lee Mason awarded them a penalty for Steve Cook’s tackle on Jesus, but VAR overruled his decision.

That gave Bournemouth fresh hope and Brooks set up a frenetic finish when Callum Wilson burst forward and found Brooks clear in front of goal to slot home.

The duo combined again deep in injury time, but Wilson saw his shot roll wide and his side’s hopes of salvaging a point were over.

Howe said: “I’m hugely disappointed not to get anything. We were fully committed and the players gave everything, right to the end, and created a number of chances. It is a tough one to take.

Bournemouth had lost all nine of their previous Premier League meetings with City but they will feel they deserved to end that poor run here.

Eddie Howe’s side managed 14 shots in total, more than any other away league team at the Etihad during Guardiola’s reign.

A combination of bad luck and poor finishing means they do not have anything tangible to show for it, at least in terms of points that are so precious to them in their current situation.

But there were positives, not least the way they avoided any further damage to their goal difference – something Howe must have feared before the game given City’s current form.

Howe spoke before the game about how his side still believed they could stay up, and this performance proved they are still fighting hard to save themselves.

City short of energy and ideas

City’s team selection appeared to have one eye on their date with Arsenal in the FA Cup semi-final on Saturday night, and their performance was below par too.

Guardiola’s side are the highest scorers in the Premier League this season but they seemed short of energy and ideas in attack on this occasion, perhaps because of their intense recent schedule.

Two bits of lethal finishing gave them breathing space before the break but they only managed one further effort at goal in the second half, when Phil Foden saw his effort blocked at close-range by Aaron Ramsdale.

With second-place already secured and next year’s Champions League appearance now certain, they had little to play for against Bournemouth, and it showed. 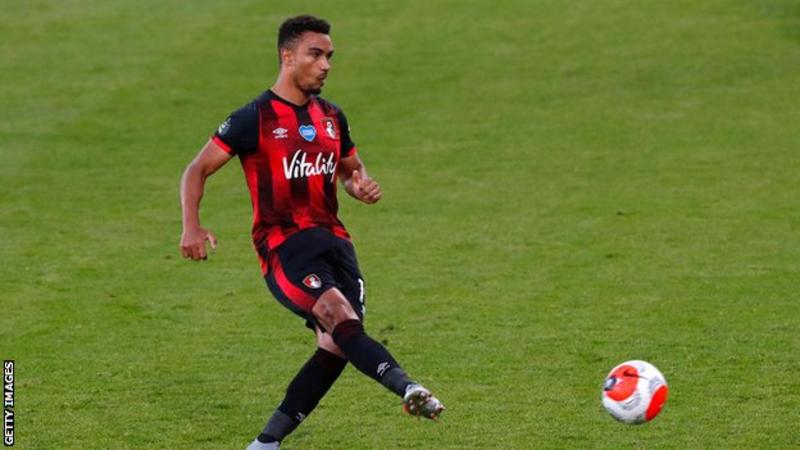 What next? City head for Wembley

City, who have already successfully defended the Carabao Cup this season, are looking to keep the FA Cup in their trophy cabinet too, and the holders play Arsenal in the semi-finals at an empty Wembley on Saturday at 19:45 BST.

Bournemouth continue their survival fight when they host south-coast rivals Southampton on Sunday at 14:00 BST.

Attempt missed. Callum Wilson (Bournemouth) header from the centre of the box is too high. Assisted by Diego Rico with a cross.

Eric García (Manchester City) is shown the yellow card for a bad foul.

Harry Wilson (Bournemouth) wins a free kick in the defensive half.

Attempt missed. Callum Wilson (Bournemouth) left footed shot from the centre of the box is close, but misses to the right.

Attempt saved. Phil Foden (Manchester City) left footed shot from the left side of the six yard box is saved in the centre of the goal. Assisted by Eric García with a cross.

Attempt missed. Callum Wilson (Bournemouth) right footed shot from the centre of the box is close, but misses to the left. Assisted by David Brooks.

Rodrigo (Manchester City) wins a free kick in the attacking half.

Fernandinho (Manchester City) wins a free kick in the attacking half.

Riyad Mahrez (Manchester City) wins a free kick in the defensive half.

Attempt missed. Gabriel Jesus (Manchester City) right footed shot from the right side of the box is close, but misses to the left. Assisted by Phil Foden.

Lloyd Kelly (Bournemouth) wins a free kick in the defensive half.

Attempt blocked. Dan Gosling (Bournemouth) right footed shot from the centre of the box is blocked.