The losing streak is dead. After five weeks of pain as the club went through the ringer on and off the field, Manly have hit back hard with an emotional win over the Broncos in Brisbane.

With senior players Jake Trbojevic and Daly Cherry-Evans at the vanguard, the Sea Eagles put together their best game of the season to pour on six tries in a 38-24 victory in the second match of the Indigenous Round double header at Suncorp Stadium. 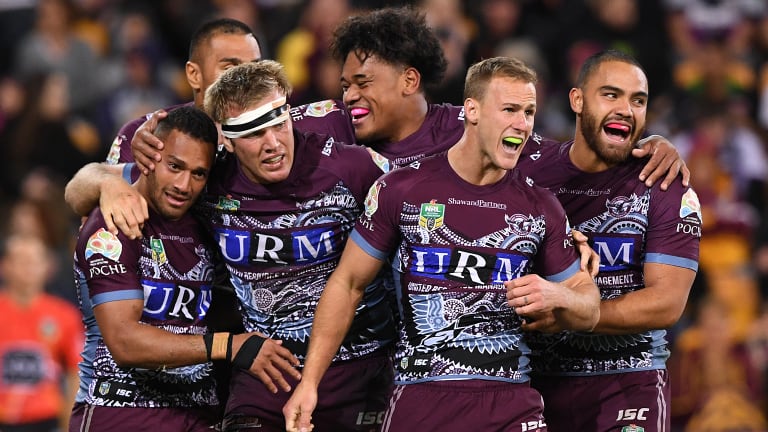 All together now: Manly realise they are well on their way to an upset win over Brisbane.

Jake Trbojevic was inspirational in the first half, having his hands on the ball in seemingly every set and scoring in the second and then in the 35th minute to help Manly overcome a 14-8 deficit after 25 minutes.

It was a brilliant grubber from Cherry-Evans deep in the second half to set up Joel Thompson's second try that put the icing on a cake that has been more than a month in the baking.

Hooker Apisai Koroisau produced the goods as well to ensure he remains in the conversation surrounding the NSW hooking spot. His try five minutes after halftime continued the momentum for the Sea Eagles and they held on despite a late Broncos try from Anthony Milford that threatened to spark a comeback.

There is a long, long way to go for Manly but the signs are starting to look promising. They almost beat the Roosters last week and turned up to Suncorp Stadium for what was technically a home game with a spring in their step.

Jake Trbojevic set the tone from the opening whistle and must surely be one of the first names to be scribbled down by new Blues coach Brad Fittler. 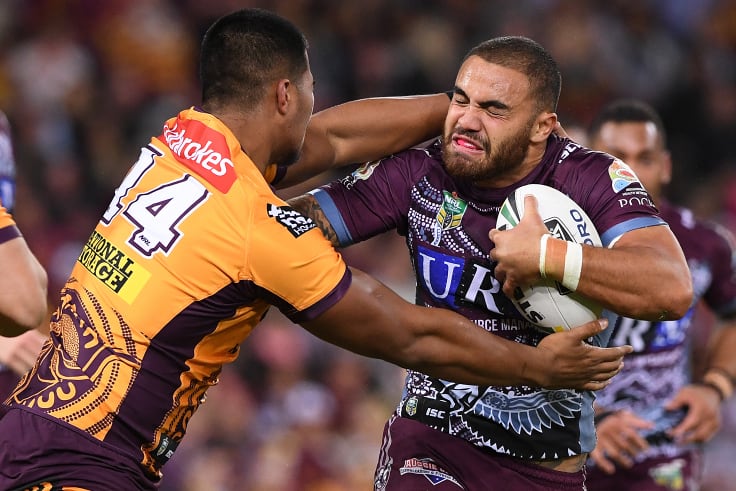 "I feel really good. It's been really tough. To come up here and put in a performance like that was really pleasing," Jake told Fox Sports after the game. "We took a lot of confidence out of the last couple of weeks."

Brother Tom has found some form at the right time of the season as well. He caused Brisbane all sorts of trouble when he found open space and it was the brothers that would combine for a four-pointer before the half-time break.

Brisbane looked sharp after conceding early and it looked as if they would be the ones dicating the scoreboard. But after failing to convert territory into points, it was Manly that made the most of their chances.

Darius Boyd struggled with a leg injury for much of the night, while Jack Bird once again failed to make any sort of impact. The latter can't be picked for State of Origin in that sort of form and if he was, it would be one of the great modern gambles.

Young giant Payne Haas returned to the NRL for game three but lasted only a few minutes before he partially dislocated a shoulder and now stands to miss up to six weeks of football.

He showed incredible toughness after the injury, having it popped back in by a trainer before rushing over to make a try-saving tackle on the sideline. But those waiting to see his full potential will have to wait once more.