McGregor declares Souths are the 'benchmark' after 24-10 win

After watching his side suffer just its second loss of the season, Dragons coach Paul McGregor was in a remarkably jovial and upbeat mood. 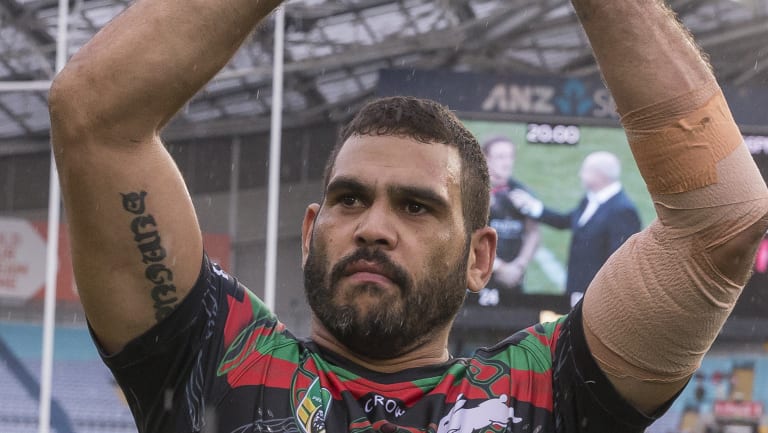 Grateful: Greg Inglis applauds the Rabbitohs fans after their upset win over the Dragons.

Last Sunday, Melbourne coach Craig Bellamy anointed the Dragons as “the benchmark” after their emphatic win against the defending premiers at Jubilee Oval.

Now McGregor, with tongue firmly planted in cheek, was shuffling favouritism along to the Rabbitohs, who are now standing on the doorstep of the top four.

“Look, they’re a good side,” McGregor said, and seriously this time. “We said before the game that we’re playing some quality opposition. They’ve got some big powerful forwards and some speed out wide. They’ve now won six of their last eight. We knew what was coming … But they just out-enthused us today.”

Fans of both these very proud clubs have gone through enough heartache over the decades to appreciate that the only label that matters is the one on the Provan-Summons trophy at the end of the season.

Actions mean far more and, on that score, Souths impressed, especially in the last 15 minutes or so of the first half.

So much has been said lately about their attack — but it was their defence that was the cornerstone of this result.

The Dragons had no less than six sets — six! — hammering away at Souths’ line. Each time, the cardinal-and-myrtle line refused to yield. Remember, this was the newborn Dragons: the best attacking team in the competition.

Ultimately, though, they couldn’t get across the line.

Minutes later, Souths worked it down the other end of the field, drew a penalty from the Dragons’ Ben Hunt and halfback Adam Reynolds landed the easy penalty goal to push the lead out to 12-0. Another turn of the screw.

Asked if that period felt like a turning point, Souths coach Anthony Seibold said: “It certainly did in the coach’s box. I just thought that we got confidence out of that. The Dragons, any time they get good field position, they go away with some points.

“There’s been a lot of talk about our attack and a lot of improvement in that part of the game so far. But it was our ‘D’ that won us the game today. That’s what was most pleasing. The Dragons are the No.1 side for a reason. They made it tough for us to score points and they’re a really good attacking side.”

In the other coach’s box, McGregor could see what the Bunnies were doing to his team. They were doing a Dragons on the Dragons.

“We’ve been winning games through forcing errors on the opposition,” McGregor said. “They turned that around today and did a little bit of that on us. Full credit to them.”

It was that type of game, played before a poor Mother’s Day crowd of 13,062. (Seriously, they must’ve been counting feet.)

After leading 12-0 at halftime, Souths never looked like losing against the alleged benchmarks of the competition, which only really started getting interested after backrower Tyson Frizell scored a 90-metre try with 13 minutes remaining after Sam Burgess had fumbled with Souths on the attack.

A try to Souths winger Campbell Graham five minutes later buried any notions of a miracle win for the Dragons.

The Rabbitohs might not be the benchmark yet but their rebirth under rookie coach Anthony Seibold has been only marginally less fascinating as the return to power of the Dragons.

No side in recent times has suffered from a premiership hangover as Souths did in 2014.

Sometimes, players need nothing more than a new voice in their ears but Seibold has provided more than that.

Defence might’ve set things up in this game but the attack he and assistant coach Dave Furner have engineered in the off-season will surely put them in good stead later in the year.

As for the Dragons, they looked flat — and understandably so.

In the last three weeks, they’ve played a top-of-the-table clash against the Warriors, the ANZAC Day blockbuster against the Roosters and then against the defending premiers in front of 20,000 people at a sun-bathed Jubilee Oval. The bubble had to burst at some stage.

So now that Souths have beaten them, are they the benchmark?

“Definitely not,” Seibold said. “We will steer clear of that.”