Melham keeps his cool, Santa Ana Lane does the rest in Goodwood

The winner, who scored at $26, was given a tremendous ride by Melbourne-based jockey Ben Melham, who was winning the big race for the third time in the past six years, having scored previously on the Darren Weir trained Platelet and Wez Hunter's Smokin Joey. 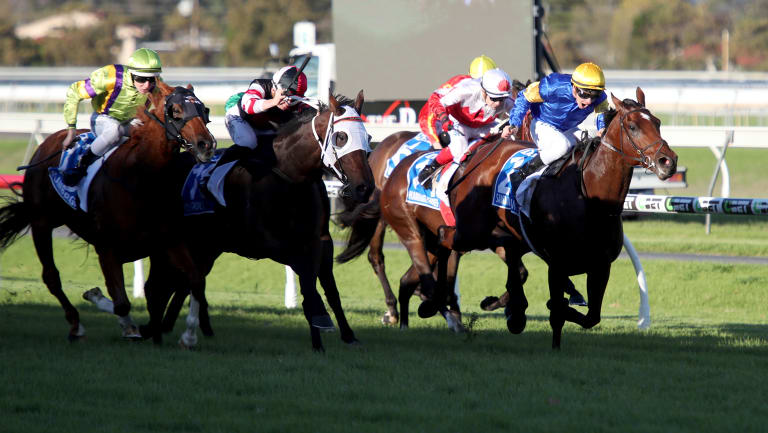 Santa Ana Lane, who had won the group 1 Sir Rupert Clarke Stakes at Caulfield in the spring at similar long odds, beat home Robbie Laing's mare Missrock ($17). She was finishing second in the Goodwood for the second year in a row, having last year beaten all but Vega Magic, the beaten favourite in this year's renewal as he was seeking the double.

Third home was the Mornington trainer John McArdle's I'll Have A Bit ($51), a three-year-old filly taking on her elders. She showed that her win at the massive odds of $151 in the group 2 Euclase Stakes at Morphetville a fortnight ago was no fluke.

Melham showed remarkable patience after Santa Ana Lane was slowly away, letting the five-year-old settle and find his feet as the leaders went off at the customary brisk pace this race is run at.

He didn't panic as he drifted to the rear of the field, and was smart enough to change his initial plan of coming to the middle of the track to weave his way inside and attack late close to the fence.

"They bounced out of the barriers, it all opened up down the inside and he had a good turn of foot and he was just too good," Melham said. "His run the other day was good, he put the writing on the wall (when third in the Group Three DC McKay Stakes a fortnight ago)."

Brad Taylor, representing Freedman (who had gone to Doomben in Queensland to supervise the preparation of Ambitious for the Doomben Cup), was full of praise for his boss, the rider – and the horse.

"We always knew he had group 1 ability and he has shown us that. He just needed luck to get through. Anthony has done a great job with him and the stable as we had a lot of changes this season," Taylor said, referring to the fact that Lee Freedman, the head trainer and Anthony's older brother, had left to train in Singapore, leaving his sibling to take over.

Another Melbourne rider, Premiership-chasing jockey Damian Lane, had a day to remember at Morphetville when he landed a four-timer. Three of the winners – Yogi, Pleasuring and Land of Plenty – were for Darren Weir, the fourth, Marcel from Madrid, for the Matty Ellerton/Simon Zahra Flemington-based partnership.

In fact it was a wipeout for the South Australian riders on their biggest day, as Melbourne riders Dwayne Dunn, Damien Oliver and Stephen Baster also rode winners alongside Lane and Melham.

* It was a Victorian-based jockey, not a Victorian-trained horse, who proved too good in Brisbane when former New Zealand champion Michael Walker – who these days plies his trade mainly in Melbourne – took the honours in the group 1 Doomben Cup over 2000 metres aboard the Chris Waller-trained Comin' Through.

The winner has been close up in many of the top group 1 races over 1600 metres to 2000 metres, and he got his reward when he just saw off stable companion Egg Tart, with Anthony Freedman's Japanese import Ambitious third.