A frustrated and disappointed Ernie Merrick has criticised A-League champions Melbourne Victory, saying he would rather not coach a team that won in the way that Kevin Muscat's side took out the decider.

A former coach of the Melbourne club, Merrick led Victory to some of the greatest moments in their early history, but he was no fan of the team that cruelled the grand final hopes of his Newcastle Jets on Saturday night. 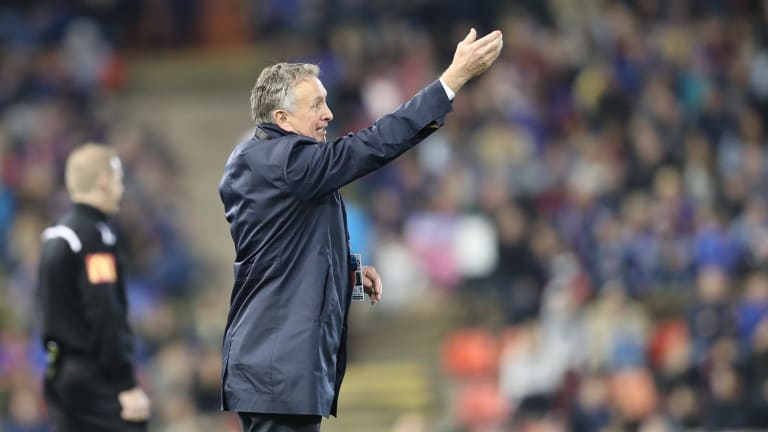 Jets coach Ernie Merrick was not happy with the way Victory played.

''If that's the way you win … I would hope not to coach a team that plays like that,'' he said.

''Once they got the goal up, they weren't going to let us play in the second half. It was very stop-start from then on, they packed their defence, evey ball out was a long ball, we controlled the play.

''You just have to look at the stats – twice as many shots. Lawrence Thomas pulled off two great saves in the first half, he's a terrific goalkeeper.

''Some of the tackles that went in in the second half I was pretty disappointed about.''

Victory beat the Jets by a solitary, controversial goal – replays suggested that James Donachie was offside when he headed back Leroy George's cross for Kosta Barbarouses to shoot past Jets keeper Glen Moss inside the first 10 minutes.

VAR, introduced this season to a welter of continuing criticism, did not disallow the goal. The FFA announced on Sunday that the video assistant referee had not had access to all the camer aangles due to a software malfunction.

On Saturday night, Merrick had questioned the decision.

''I have spoken to four or five people already and they all said the same thing.

''I don't want to be a sore loser, but if that goal was offside I just wonder what the point of the VAR is.

"I am still a fan of the VAR but I am not sure if he looked at that in replay.

''When the ball was kicked, it looked like there were three players offside. What's the point of the VAR if you are not going to pay attention to it?

''And of course once they went a goal ahead that was it, very stop start, drawn out. Not the best spectacle, but they won.''

After an entertaining first half when the Jets piled on the pressure and Victory were only saved by the heroics of goalkeeper Lawrence Thomas, Muscat's men shut the game down, frustrated their opponents and ensured that the Jets could never get into a rhythm, much to Merrick's chagrin.

Asked whether referee Jarred Gillett had put the whistle away for too long in the game, Merrick was forthright.

''I thought the referee let far too much go. We were hoping for a free flowing, enjoyable entertaining game of football and despie how much we tried to do it, it just kept breaking down.

''I don't know, we couldn't break them down in the second half, the referee let a lot go, there were a lot of fouls and free kicks.

''We dominated possession, we had twice as many shots, and we tried very hard to play football, we have done it all year and we have got into the grand final. It's a pity we couldn't have gone further but Victory were the winners.''

Despite his obvious disappointment, Merrick believes the Jets have set a solid platform to be competitive again next season.

''I think we have made enormous ground, we have really put ourselves on the A-League map, we are not a team that's easily beaten, we have won a lot of games, we have scored a lot of goals and every team in the league we have beaten at least once. It's a credit to them what they have achieved.

''I just think we can build on this team and we can be in the finals next year.''

He did not defend the brutal challenge of Jets forward Roy O'Donovan on Thomas, which saw the Irishman red carded late in the game.

''I know that you are not going to believe this but I didn't actually see it. It looked like he had a foot up on the goalkeeper, which is a send-off, but I didn't see it clearly but it is out of order if he did that.''