MIAMI GARDENS, Fla. — Second-seeded Simona Halep kept alive hopes of regaining the world No. 1 ranking, beating Polona Hercog 5-7, 7-6 (1), 6-2 on Sunday to reach the round of 16 of the Miami Open.

The top men’s seed, Novak Djokovic, was also extended to three sets, but he too prevailed, 7-5, 4-6, 6-1, against Federico Delbonis.

Djokovic is hoping to eclipse Andre Agassi’s six ATP crowns in South Florida over the next week, and although Djokovic endured some shaky moments at Hard Rock Stadium, he still possessed enough quality during key moments to knock out the 83rd-ranked Delbonis.

“It was an exciting match, and I am just pleased that I managed to hold my nerve,” Djokovic said.

Halep lost her place at the top of the women’s game to Naomi Osaka’s at the Australian Open earlier this year. But with Osaka being ousted on Saturday, Halep can return to the position she last held at the end of 2018 if she wins the Miami Open for the first time.

Halep, who will also move up to No. 1 if she reaches the final and Petra Kvitova does not win the title, will have to do better than the patchy performance which eventually sent the gutsy Hercog, the world No. 93, out.

“She played unbelievable, and it was such a tough match,” said Halep, who hit 48 winners compared with Hercog’s 38 but won just 31 percent of points on her first serve.

“It was good to play for almost three hours, though. I slowly found my rhythm, but I always had belief so if I can keep doing this, I will have a good tournament.” 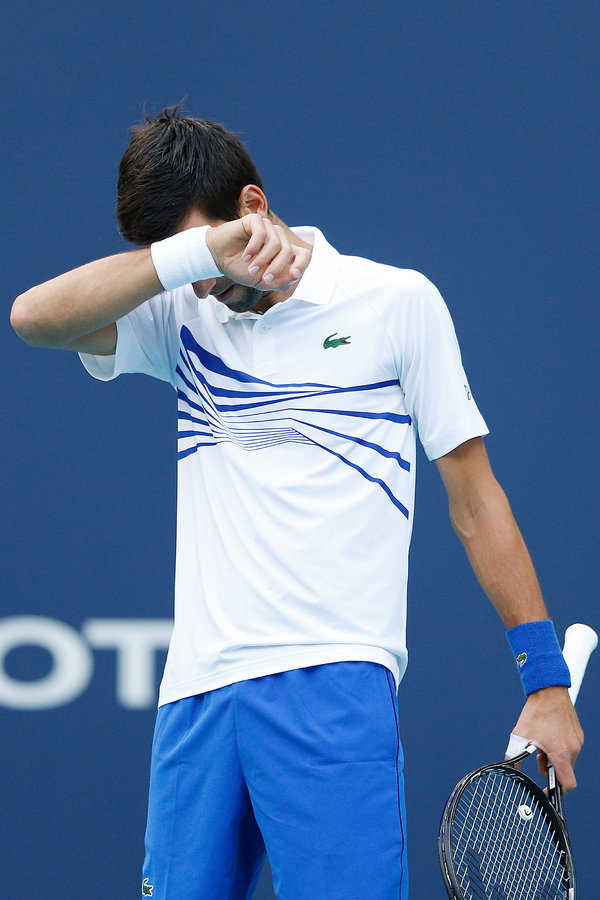 Halep, the 2018 French Open champion and currently the world No. 3, arrived in Miami having failed to get past the round of 16 in Indian Wells and the quarterfinals in Dubai.

She started sluggishly on the center court at Hard Rock Stadium, where Hercog moved into an early 3-1 lead. Halep finally broke back for 4-4, but another sloppy game handed Hercog the opening she needed to take control and win the first set.

Halep was far more solid in the second, despite missing the chance to draw level when she was broken serving at 5-3 and Hercog kept her nerve make it 5-5.

As the clock ticked past two hours, a brilliant drop shot by Hercog ensured a second-set tiebreaker only for Halep to emphatically win it, 7-1, before claiming the third set and the match after 2 hours 50 minutes.

Isner was broken in the very first game but responded by hitting a total of 16 aces to set up an intriguing match in the round of 16 with Kyle Edmund, who defeated Milos Raonic, 6-4 6-4.

“I did a lot of things well,” Isner said. “I played a good first set, even though I didn’t start it off well. In the second, it wasn’t quite as clean. But I’m into the round of 16 of a big tournament and I’m happy.”