Morale-boosting win for Djokovic in Madrid

Novak Djokovic beat Kei Nishikori at the Madrid Open to get the type of win he needed to boost his confidence and get his game back on track.

Serbian 10th seed Djokovic defeated the 20th-ranked Nishikori 7-5 6-4 in the first round.

Djokovic broke serve late in each set to get past Nishikori after nearly two hours. 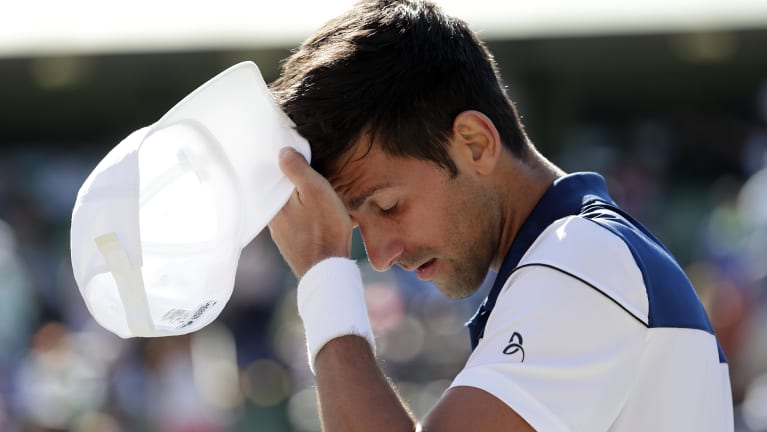 Frustration: Novak Djokovic has been away from the game with an elbow injury.

"I'm glad that match went my way, but it could have gone his way as well. I managed to play the right shots in the important moments," Djokovic said.

"It was exactly what I needed for my confidence and for my game. I'm just happy to go through this one."

Coming back from a right elbow injury, Djokovic hasn't made it to the quarter- finals in his five tournaments this year, admitting he returned to tennis too quickly.

In his last event, he lost in the third round in Monte Carlo, where Nishikori reached the final.

"I'm just trying to take one day at a time, build my game, because that's something that I feel is a priority right now," Djokovic said.

"I feel much better about everything that is happening on the court and around tennis, in general, with my body than maybe two months ago."

Djokovic was aggressive from the start, hitting 26 winners against Nishikori.

Ashleigh Barty has let a great opportunity to advance into the last-16 of the Madrid Open slip away after going down to world No.2 Caroline Wozniacki.

Barty led 4-2 in the final set, but the Dane roared back to win the last four games to prevail 6-2 4-6 6-4 in the clay court event in the Spanish capital.

The Australian No.1 was ultimately let down by her groundstrokes in crucial stages of decider as she finished with 54 unforced errors for the match.

Wozniacki will next face former French Open semi-finalist Kiki Bertens, who beat Anastasija Sevastova 6-1 6-4 in the second round.

Former world No.1 Maria Sharapova's revival on clay is gathering pace as she overcame a tense opening set to beat Romania's Irina-Camelia Begu 7-5 6-1.

Qualifier Dusan Lajovic got past Karen Khachanov 6-3 6-2 to set up a second- round meeting with Frenchman Richard Gasquet.

In a first-round all French affair, Benoit Paire hit 39 winners to defeat 15th- seeded Lucas Pouille 6-2 6-3 and progress to a clash with 19-year-old Canadian Denis Shapovalov.