Australian jockey Nash Rawiller has been disqualified for 15 months by Hong Kong Jockey Club stewards after he was found to be associated with betting on races in the racing mecca.

HKJC stewards have slapped Rawiller with two charges, including: "bet or facilitate the making of a bet or have any interest in a bet on any race or any contingency relating to a race meeting. The particulars of this charge being that on diverse occasions whilst licensed as a jockey by the Hong Kong Jockey Club he did have an interest in bets on horses which he rode at race meetings conducted by the club, such bets being facilitated by people known to him." 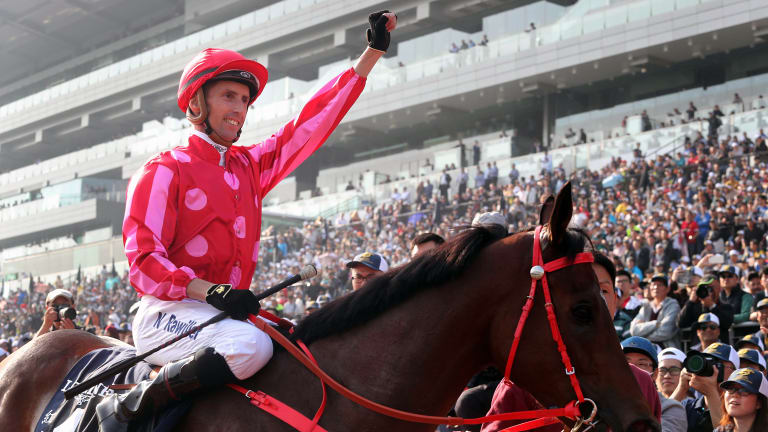 Stewards said Rawiller is accused of tipping horses he has ridden.

Rawiller told stewards he did not wish to enter a plea to the charges. Stewards will, therefore, proceed on the basis of a not-guilty plea and ask Rawiller to present a defence to the charges.

The last jockey to be convicted of a betting offence in Hong Kong was Chris Munce, who served more than three years in jail after he was found guilty of taking bribes in exchange for tips.

However, it is understood in this case that action in the courts is unlikely as it was a HKJC investigation. Rawiller has until noon on Thursday to appeal the conviction.

“The club’s handling of this matter demonstrates the expert nature and strength of the club’s systems for the prevention and detection of breaches of the rules of racing, and our unwavering resolve to ensure the highest standards of the integrity in Hong Kong racing,” HKJC executive director of racing Andrew Harding said.

Rawiller did not ride at Happy Valley on Wednesday and will not be able to ride at Sha Tin on Sunday.

He has had a great career, riding more than 2000 winners, including 58 group 1s. Rawiller won the two-year-old triple crown, including the Golden Slipper on Pierro, added a Caulfield Cup with Elvstroem and was the regular partner of champion mare More Joyous.

He has spent the past four seasons in Hong Kong with his biggest win on Mr Stunning in the Hong Kong International Sprint last year, a horse which was to ride in the Chairman’s Sprint Prize on Sunday.