Home » Sport » Not all draws are equal: Iceland stops Messi and the tiny nation's miracle continues

Not all draws are equal: Iceland stops Messi and the tiny nation's miracle continues

Moscow: From the reaction of the respective players, coaches and supporters at the end of Saturday's World Cup match at Spartak Stadium, you surely would have concluded that little Iceland had toppled Lionel Messi and the giants from Argentina, executed an upset for the ages and rocked the soccer orbit.

Indeed, as Argentine chins dipped, the Icelanders, some crazy percentage of the 337,000 population that had journeyed to Russia, celebrated with the vigour and joy that a 1-1 result does not convey.

Forgive them, for what had just unfolded will take a special place in the country's history – and not just in the sporting realm: a point in their World Cup debut, against South American masters and the most gifted player of them all. 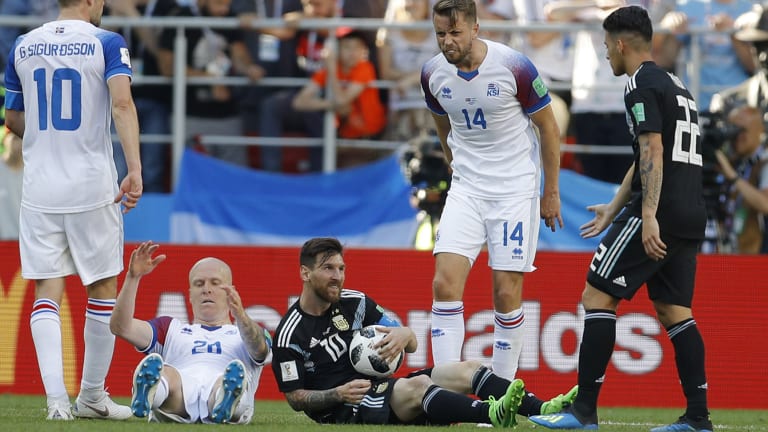 Argentina’s Lionel Messi sits on the pitch during the draw.

Not all draws are equal, and for Iceland, which executed their tactics to perfection and quickly answered an early deficit, the single point could not quantify what it meant.

"People are saying, 'Why do you celebrate a point like you won the game?'" coach Heimir Hallgrimsson said. "But just wait and see when we win a game. That's going to be a celebration." 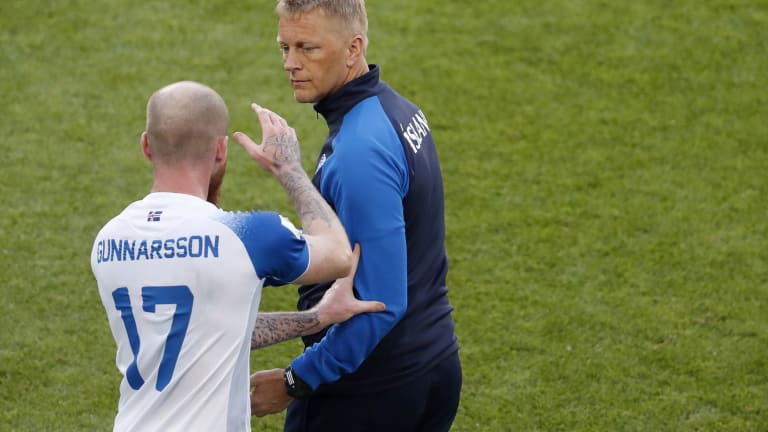 For now, the Icelanders will savour what they richly deserved. And with the group favourite out of the way, they can turn their attention to beating Nigeria or Croatia for a chance to reach the round of 16.

The Viking Clap is just getting started.

There are greater heavy-duty conflicts during these two weeks of group scrums: Spain-Portugal, Germany-Mexico and Belgium-England. But none offered contrasts as delicious as here in north-west Moscow: big vs. small, elitists vs. outsiders, high style vs. blue-collar structure.

On the sideline, Hallgrimsson, a part-time dentist, was a profile in cool, arms crossed, in short pants and warm-up jacket emblazoned "Island," as the country name is spelled in the native language. His counterpart, Jorge Sampaoli, looked as if he was about to pounce onto the pitch like a cheetah freed from captivity. With each empty possession, he paced and growled, his arms in a constant state of tension.

It was a frustrating afternoon for the Argentines, who laboured to solve Iceland's 11-player defensive puzzle in front of 44,190 singing spectators.

Sergio Aguero had put them ahead in the 19th minute, turning and firing from 14 yards to find the upper left side of the net. For the most part, though, Iceland constricted space, moved in synchronicity, boxed in Messi and rarely allowed Argentina to accelerate the pace.

After Alfred Finnbogason converted a rebound from close range in the 23rd minute, Iceland resumed their stout ways.

"There's a certain amount of frustration right now," Sampaoli said. "We came very much motivated, and we really came to win against a team that had a very strong defensive structure. We tried to work better in the second half to generate more opportunities, but what can you do?"

Well, Messi could have converted a penalty kick in the 64th minute. Instead, he left his attempt within reach of goalkeeper Hannes Halldorsson for a momentum-killing save.

"In the first game of the World Cup, face the best player in the world in a penalty is, yeah, a big moment," Halldorsson said. "It's a dream come true to save it, especially because it helped us get a big point that I hope is going to prove important for us."

Consider the players involved: Messi will enter soccer annals as one of the all-time greats (even if he never wins a world title), while Halldorsson is a 34-year-old aspiring filmmaker with an middling club résumé. (He plays for Randers in Denmark.)

Messi, for all of his greatness, is not a sure thing on penalty kicks. And Halldorsson was prepared. 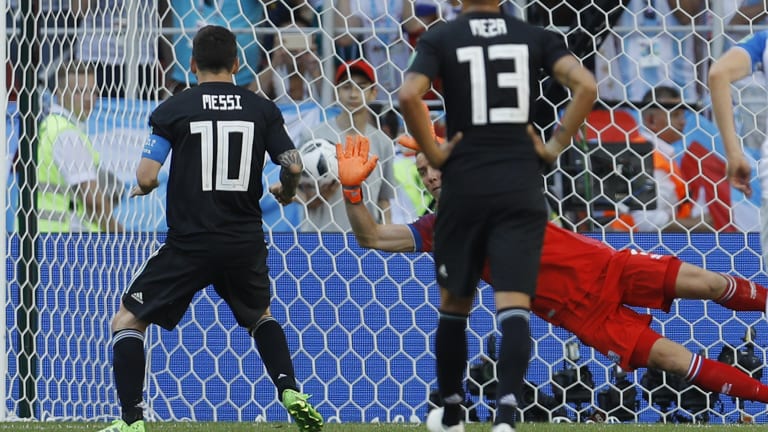 "I did some homework. I knew this was a situation that could come up," he said. "It's a long shot, but it happened. I looked at a lot of penalties from Messi, and I also looked how I had been behaving in the last couple of penalties, so I tried to get into their minds and imagine what they would be thinking about me. I had a good feeling he would go this way today."

The penalty bid was consistent with Messi's off-day. Iceland's fortitude allowed him only fleeting moments of freedom. With his teammates unable to get him the ball, Messi often dropped deep into the formation to take possession and launch attacks. In front of him, 11 Icelanders stood in his way.

Said Hallgrimsson: "We never gave them a runway to get anywhere."

On the defensive tactics, he added: "If we go one-on-one everywhere around the pitch, you don't need to ask who is going to win that game. If we would like to get points or if we would like to win against teams like Argentina, we have to play a special way. For everyone, it is more enjoyable to play this way and achieve something than play in a different way and don't achieve anything."

In the final 10 minutes, Messi stroked a shot wide left and, with a pocket of space, drove a 20-yard bid off a teammate in the penalty area.

And on the final touch of the match, presented with an opportunity for heroism, just as rival Cristiano Ronaldo had fulfilled for Portugal a day earlier, Messi smashed a 28-yard free kick into the wall.

Ronaldo's name was raised in Iceland's postgame news conference. Two years ago, after Iceland made its European Championship debut with a 1-1 draw against Portugal, the superstar criticized the underdogs for celebrating as if they had won a trophy. He called it a "small mentality." 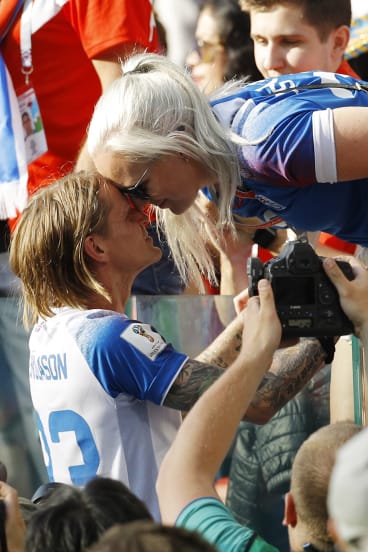 When asked about Iceland's celebration, Halldorsson said to the questioner: "Are you Cristiano Ronaldo's uncle? It's a big draw for us. We learned at the Euros how important it is to get on the board right away if we are going to reach our goal."