1. St George Illawarra Dragons (Last Week: 1): Well beaten by the Bunnies, but stay on top thanks to the Warriors copping an even bigger hiding at the hands of the Roosters.

2. New Zealand Warriors (2): What happened here? They smashed the Chooks in Sydney but when the fixture was reversed, they were completely and utterly embarassed. Need to bounce back this week.

3. Melbourne Storm (3): An easy win against the Titans and they're looming just off the top of the ladder, ready to strike.

4. South Sydney Rabbitohs (4): A very impressive win over the Dragons in which their defence looked mostly impenetrable. 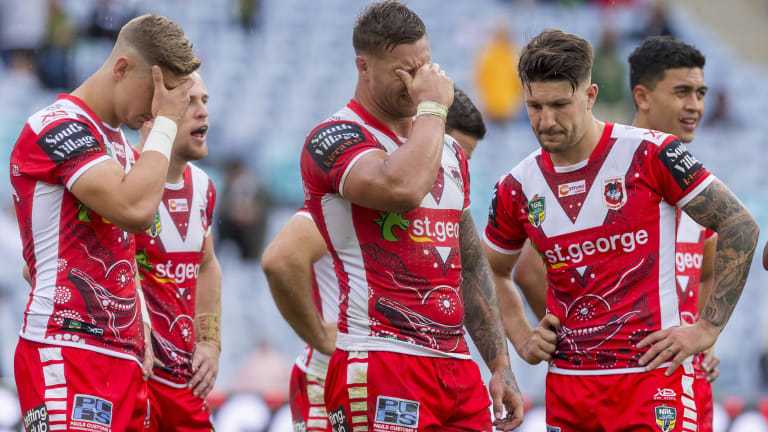 Dejected: Dragons players react during the 24-10 loss to South Sydney.

5. Penrith Panthers (5): Another win, they've quietly gone about their business without Nathan Cleary, who returns this week to face off against his dad's Tigers.

6. Wests Tigers (8): Snapped a three-game losing streak with a solid showing at Leichhardt on Thursday night.

7. Cronulla Sharks (7): A comeback win against the Raiders, whose home fans must be sick of the sight of Shane Flanagan's men by now – Cronulla have won six straight in the nation's capital.

8. Sydney Roosters (9): Their best performance in what has been an inconsistent season – but everyone was firing against the Warriors in Auckland.

9. Brisbane Broncos (6): At 'home' against the team that's sitting equal last and struggling to score… and you let them put 38 on you? Disastrous.

10. Canberra Raiders (10): After a couple of good performances they came crashing back to earth – big test against the Dragons this week.

11. North Queensland Cowboys (11): The Leichhardt curse continued for the Cowboys, who will host a red-hot Souths team this Saturday.

12. Newcastle Knights (12): A pretty disappointing effort at home against Penrith, but still only one win outside of the top eight.

13. Manly Sea Eagles (16): A stunning performance at Lang Park, they looked a world apart from the horror show we've seen in recent weeks.

14. Canterbury Bankstown-Bulldogs (15): Beat their old rivals Parramatta in a gritty, powerful performance at ANZ on Friday.

15. Parramatta Eels (14): Lost to the Bulldogs and now once again sit last on the ladder, with just two wins from ten games.

16. Gold Coast Titans (13): Five losses in a row now and this week's game at home against Newcastle is simply a must-win for Garth Brennan's players.