MADRID — With two diamond studs sparkling in his ears, Vinícius José Paixão de Oliveira Júnior strolled through the front door of the gated villa he calls home after a day of training at Real Madrid.

Within minutes, he and his two closest friends from Brazil had fired up the FIFA video game in the living room to begin a daily ritual: the usual marathon session that seems to only pause for meal times.

“What a header,” one of the friends yelled as the digitized version of Vinícius leapt into the air and buried a shot past the goalkeeper. Vinícius, 19, raised his head from the massage table to see the action unfold on a 65-inch television, and then let his attention drift back to his phone as his personal physiotherapist continued to work on his legs.

This villa, in one of Madrid’s most exclusive neighborhoods, has the air of a teenage boy’s paradise. In addition to its enormous television, there are electric scooters, a driving seat for a motor racing game and table tennis and pool tables. The items are there to distract as much as entertain: Vinícius’s status as the next great star of Real Madrid means he rarely ventures out in public anymore. There are strict rules for his friends, too. No nights out when Vinícius is at home.

“It’s not fair if we go out and he has to stay in,” said one of them, Luiz Felipe Menegate. “We know we’re here for him to succeed.”

In some ways, he is correct. Even if he were not one of the sport’s brightest young prospects, Vinícius probably would be spending his days talking soccer in the company of Menegate and another boyhood friend, Wesley Menezes, or digging into plates of black beans, rice and sirloin prepared by a favorite aunt. But in so many other ways — not just the toy-filled villa, but the multimillion-dollar salary and the attention and expectation that come with being one of the most valuable teenagers on earth — Vinícius Júnior now inhabits an entirely new world. 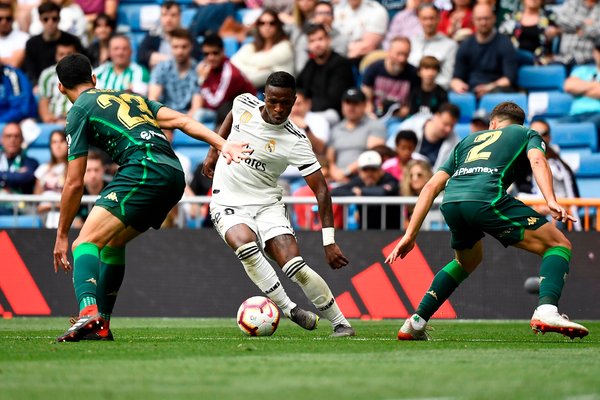 In April, he and his team invited The New York Times into that world, offering a rare glimpse into the care and the planning and, yes, the comforts that can help a talented young player navigate the warp-speed transformation from prospect to pro.

In Vinícius’s case, the change of venue alone has been remarkable.

Only a few years ago, Vinícius, a skillful and speedy wing, was living in a cramped room with more than a half-dozen family members in a Rio de Janeiro municipality notorious for violent crime and crippling poverty. Then, in May 2017, Real Madrid agreed to pay the Rio de Janeiro club Flamengo 45 million euros (just over $50 million) for the rights to the teenage forward. In an instant, before he had kicked a ball as a professional, Vinícius became the most expensive teenage export in Brazilian soccer history.

The record-breaking fee made Vinícius, then only 16, an instant millionaire. But it also kick-started the effort to make his journey from Rio to Europe as seamless as possible. That is why Menegate and Menazes are here, along with his aunt and nearly a dozen other family members, all of them living inside the two-story villa behind the tall gates, the ferns and the evergreens of La Moraleja, an enclave for Madrid’s rich and powerful.

It is the dream of every young Brazilian boy who plays soccer to land with a club like Real Madrid, a team of superstars that has won more international titles than any other club. Vinícius’s journey, though, represents something far different than the usual favela-to-riches story: It also captures the fevered, high-risk game Real Madrid plays to try to maintain its excellence, the ease with which top clubs can bid up the value (and the expectations) for an unproven player, and one family’s efforts to try to maintain just the slightest bit of normalcy amid that storm.

“I don’t really feel pressure,” Vinícius said in April. “I just focus on enjoying myself on the pitch.”

Much of that, he said, is because of what is in place inside the villa in La Moraleja, away from the prying eyes of fans and reporters, and a universe removed from his childhood.

Even by the standards of São Gonçalo, the bayside city of about 330,000 near Rio that is blighted by poverty and crime, the Paixão de Oliveira family had it hard. Vinícius’s father had to take work in a neighboring state to support his family, installing wiring for cable and internet firms. Often that was not enough.

When he was 6, Vinícius, who according to family members showed glimpses of talent soon after learning to walk, signed up for soccer training with a local school run by Carlos Eduardo Abrantes, known to everyone as Cacau. The school is one of scores affiliated with Flamengo, and that meant Cacau also shared in the riches of Vinícius’s transfer to Madrid. “It was a good amount,” he said, without revealing an exact figure.

Cacau said Vinícius’s family often could not afford to pay the monthly fees to keep him in training, and often did not have enough to eat. He said he and his wife, Valeria, would sometimes help by allowing him to skip a payment, or by giving Vinícius something to eat. “He was very needy,” Cacau recalled on a blisteringly hot February afternoon. Nearby, a group of boys trained on his facility’s single artificial turf field. Vinícius, in the form of two billboards, watched over them.

By the time Vinícius was 10, Flamengo had signed him to its school, located on the other side of the city. At 12, Vinícius moved in with his uncle Ulysses, whose home was closer to Flamengo’s training complex, avoiding a commute to training that sometimes stretched to three hours.

By the time he was 14, Vinícius’s rare talent was clear. He was one of the best players in Rio, and soon a star on national teams for his age group. It was then that TFM, one of Brazil’s soccer agencies, started to manage his career, taking the place of a previous agent and providing support that allowed his father to return home to his family and focus on Vinícius’ ascent.

TFM bet on his promise and started investing in Vinícius, persuading the family to let it represent the talented youngster. The informal arrangement carried risks for the firm because in Brazil players cannot sign with agents until they are 18.

“It is a gentleman’s agreement, and many times that agreement isn’t respected by the parents, and he’s free to change his mind,” said Frederico Pena, the agent who runs TFM.

TFM helped Vinícius’ family rent an apartment closer to Flamengo’s training center and paid for him to attend two high-performance facilities in the United States that are used by professional sports franchises. Such was the speed of Vinícius’ rise that a planned third visit had to be scrapped: He had been promoted to Flamengo’s first team.

When Vinícius was honored as the best player and top scorer for Brazil’s championship team at a South American under-17 championship in early 2017, the performance led to one of the most remarkable transfer battles in recent soccer history. Real Madrid and Barcelona, bitter rivals on and off the field in Spain, each decided it wanted Vinícius — a teenager who still had not made his professional debut for Flamengo — at almost any price.

Barcelona opened the bidding at 10 million euros and an option to match any offer from a rival club. Real Madrid topped the bid. Back and forth it went until the price hit 45 million euros.

At that point, Pena said, Real Madrid’s chief executive, José Ángel Sánchez, told Vinícius’ representatives that the club would pull out of the race to sign Kylian Mbappé, the French teenage sensation then starring for Monaco, if Vinícius would commit.

“We realized they really wanted him because they’re comparing him, without playing a professional game, with a player killing it at a top European level,” Pena said, remembering how he laughed at the time, unsure whether Sánchez meant what he was saying.

The deal was quietly completed in early 2017. Vinícius, still only 16, would be richer than he had ever dreamed. Months later, he would make his professional debut for Flamengo at Rio’s famed Maracaã stadium, and then announce his pending move to Spain. Just over a year later, in July 2018, the now-18-year-old Vinícius and his entourage landed in Madrid for the first time.

As they waited to enter the auditorium where the Spanish news media had gathered to get a first look at Real Madrid’s latest big-money signing, Menegate teased Vinícius about the formal clothes they had been ordered to wear. Vinícius, dressed in a dark tailored suit, laughed that his friend was only angry because he did not look as sharp. The jokes flowed until Menegate suddenly shot his buddy a look.

“Can you believe all this?” he asked.

“No,” Vinícius replied. “I’ll only believe it when I get on the field.”

Vinícius returned to Brazil to close out the season with Flamengo, and he and his family members, for whom the days of hardship were now over, tried to play down their new status. They moved into a better house and bought a new car — one Vinícius’ managers insisted had to be bulletproof — but otherwise kept a low profile.

“A lot of times they said, ‘Let’s pretend we don’t have this money so we don’t do something stupid,’” Pena said.

The transition to Europe has not always been easy. The battle for a regular place in the Real Madrid lineup is not for the meek, and even the biggest signings, and the brightest prospects, quickly fall out of favor with fans and the news media. But at least that quest, which continues Friday when Real Madrid plays Atlético Madrid at MetLife Stadium in New Jersey, is within Vinícius Júnior’s control; the friends and family members who have uprooted their lives to support him already have surrendered part of their own identities to help him flourish. Menegate acknowledged as much one afternoon as he waited for his friend to return from training.

“I know that we are not just Menegate and Wesley anymore because people now just see us as the two guys who live with Vinícius,” he said.

Still, the attempts at normalcy continue. His aunt Vanessa, who is part of the entourage, cooks every meal for the household, and the menu rarely changes: rice, beans and protein, staples of family meals throughout Brazil. Most days, the family gathers at the table a couple of hours before dinner; they wash down slices of a cornmeal cake, known as bolo de fubá, with sweet Brazilian coffee as pagode music blares from a living room speaker. Except for the fact the group is sitting in a home whose previous occupant was the chief executive of one of Spain’s largest retailers, the scene could be one set back in the cramped apartment in São Gonçalo, family and friends enjoying one another’s company, discussing soccer and the quality of aunt Vanessa’s cooking.

The next day, Vinícius will return to training. The club will focus on his development. The agents will focus on his millions. The family members and the old friends will offer their company. The auntie will prepare more beans and rice.

“My dad says, ‘Just focus on the pitch,’” Vinícius Júnior said. “‘You don’t have any problem off the pitch.’” 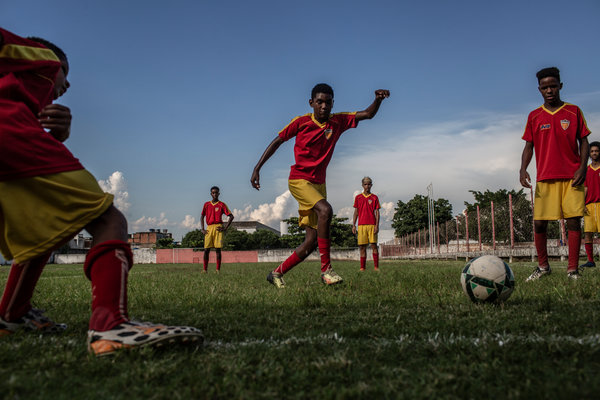 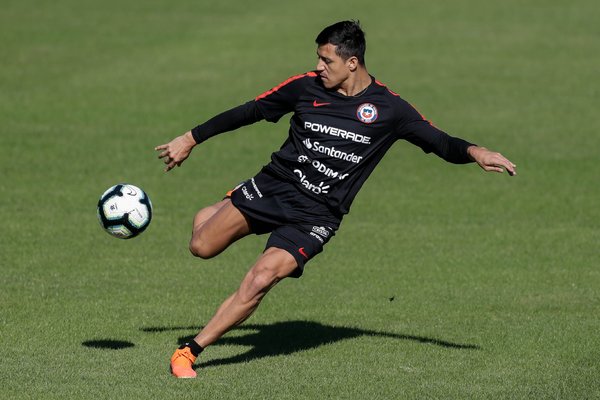 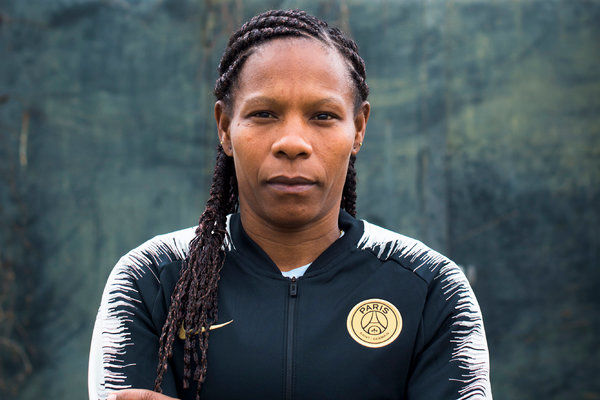