Home » Sport » PDC World Darts Championship, 2020-21: Tournament gets under way with fans in place for one night only

PDC World Darts Championship, 2020-21: Tournament gets under way with fans in place for one night only 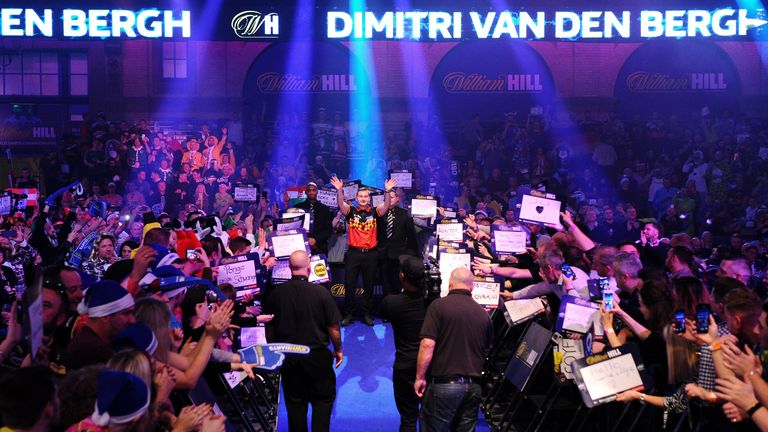 When fans bought their tickets for opening night at the World Darts Championship the hope was it would be the start of a socially distanced Christmas party at Alexandra Palace – it turned out to be a one-night-only affair which has left the PDC frustrated.

On Tuesday night around 500 fans made the trip up the hill in north London to become the first fans to attend darts in the UK since March, when the country was plunged into lockdown amid the coronavirus pandemic.

Tickets were only available in household and support bubbles, smurfs and Mexicans were in short supply and no-one has been able to find Wally.

It was the World Championship, but not as we know it. The usually packed fans village was instead home to an expanded and socially distanced TV compound, a one-way system for people to move around, a plethora of hand sanitising stations and no fancy dress.

“I just wanted to put a smile on faces, it’s been a horrible year for a lot of people who have lost loved ones and have lost jobs,” Peter Wright told the media afterwards, although that only tells half the story.

The defending champion was the only person within 500 yards (or more) of Alexandra Palace in fancy dress – he donned a full Grinch costume, complete with fur hands, red and white scarf and mask. The only thing missing was Cindy-Lou Hoo.

On behalf of everyone watching….

Wednesday Evening at the Darts (6pm)

With Wright bringing some much-missed colour and festive cheer to proceedings, PDC chairman Barry Hearn was left exasperated by the last couple of weeks that culminated in Monday’s decision to put Greater London into Tier 3 to combat the coronavirus.

On the eve of the tournament Steve Beaton, playing in the World Championship for a 30th consecutive year, admitted the chance to play in front of packed tables and stands had been missed, Hearn called it “sanitised darts”.

“It’s not darts as we know it but it’s the best we can do – and in life you have to do the best you can,” Hearn told Sky Sports.

“I am gutted that it is just one day – I had exactly the same during the World Snooker Championships, just one day before they pulled the plug.

“Sooner or later common sense, the practical realisation of where we all are means things have got to change. Of course we follow the rules and I am biased but all I am looking for is common sense.

“At Christmas we are having households mix, we are having people queuing up to go into shops and we can’t have a handful of people at this, or any other sporting event, to enjoy themselves.

“I know it’s a very difficult time but people understand there are rules to follow and I think people will be surprised by how well it goes.”

Hearn called them golden tickets for the few hundred in attendance and it didn’t take long for the forklifts to move in, the chairs to be stacked and the Sky Sports studio to be taken down and reassembled in the centre of the arena.

Things will look different again for the next eight days after Monday’s announcement that means that the festivities at Ally Pally will be played out entirely behind closed doors until at least December 23, when the government will review the decision. 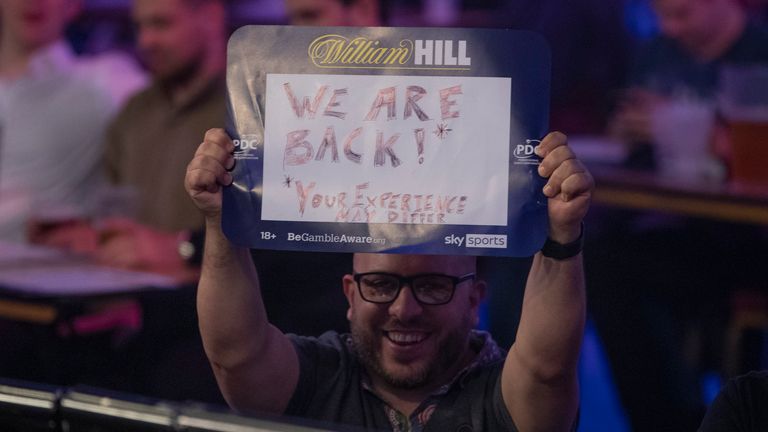 Having spent almost a fortnight working night and day with local authorities, broadcast partners and ticket partners, the magnitude of this week’s news was not lost on PDC chief executive Matt Porter.

“I am not sure my actual thoughts are for broadcast, but its obviously a kick in the teeth,” Porter told Sky Sports.

“It was a real kick in the teeth we were very excited having sold tickets for the last month with a few thousand people ready to come down and enjoy what would have been a very different World Championship but a top-class event with the best players.

“A couple of months of planning, a lot of hard work from a lot of people to get us just to this point and we wanted to end the year on a high. Throughout the pandemic, the PDC has done well to put events on and deliver top-class entertainment.

“We’ve managed to keep our players active, fulfil every event that we were to deliver and that has been a great effort and we were hoping to end 2020 on a high and go into 2021 saying we were ready to deliver.

“The biggest challenge is the uncertainty, we are still hoping that after Christmas we will be able to welcome fans into the arena, the government will review their decision on December 23 and if the number goes the right way and other factors move in our favour we might be able to get people in for the last 16.”

The last few months in Coventry and Milton Keynes, in low-key environments left Wayne Mardle pondering what to expect and how that might translate to the players used to that most-used phrase this year, a new normal.

The Ricoh Arena and the Marshall Arena were condensed amphitheatres with crowd noise piped into the venue, but on Tuesday as MC John McDonald introduced the players and his voice echoed around Ally Pally it was a polite ripple of applause that greeted Steve West and Amit Gilitwala as they made their way past the cheerleaders making their own return after months away.

There was no artificial crowd sound being played into the West Hall as the natural noise of those in attendance was left to create a very different environment to last year and even last month, something new to adjust to, a new normal. The hope is that conversations with the government may allow fans to return after the Christmas break, the last 16 will get under way after a three-day Christmas break – it’s a sign of the times that uncertainty prevails for those who may want to go, but more importantly for those planning an event and running a business.

Despite the obvious and understandable frustration, the final word goes to three-time world champion and Sky Sports expert John Part.

“I wasn’t sure we’d resume the darts schedule at all – we are back at Ally Pally and thankfully we are able to run a tournament.

“I know there have been a few hiccups but I’m so happy that we get to do this over this time period, as it where it belongs.”

You won’t miss a dart this Christmas thanks to the dedicated Sky Sports Darts channel all the way until January 4 with every session from the World Darts Championship, including the final on Sunday, January 3. Check out daily Darts news on skysports.com/darts, our app for mobile devices and our Twitter account @skysportsdarts