Superstar Ellyse Perry has starred with both bat and ball to help the Sydney Sixers cement their status as one of the favourites in the Women’s Big Bash League with a big win over cross-city rivals the Thunder.

Perry smashed 81 off 48 in a strong opening partnership with Alyssa Healy, who brought her strong international form into the domestic game hitting 42. 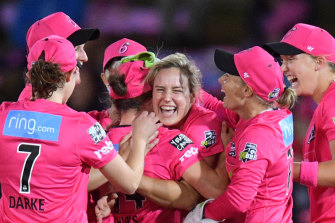 Ellyse Perry, centre, celebrates with her Sixers teammates after taking the wicket of Rachel Priest.Credit:AAP

The pair were helped by a number of fielding blunders from the Thunder, with Ashleigh Gardner dropped on 20 by Alex Blackwell helping the Sixers amass a huge total of 192.

The two wickets by all-rounder Nida Dar, who is the first Pakistani woman to play in Australia’s T20 competition, were a bright spot for the Thunder.

But the team got off to the worst possible start in their chase, losing two wickets early to the bowling of Perry. 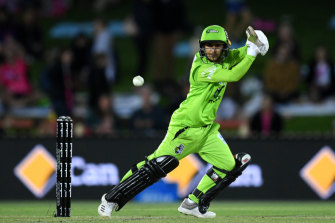 Nida Dar of the Thunder plays a shot during the Women’s Big Bash League match.Credit:AAP

Alex Blackwell and 16-year-old Phoebe Litchfield tried to steady the Thunder with a 73-run partnership before Litchfield fell for 26. Blackwell mounted a half-century off 34 balls. But the Thunder fell 49 runs short.

Litchfield said the chance to bat with Blackwell was a "crazy experience" for someone so young.

"It was just crazy, it felt like a dream … It was a great experience having her out there [and] made me a bit more calm," Litchfield said. "It is a very good spot to watch Alex Blackwell go at it at the other end."

The game was the first of a new format for the WBBL, with the tournament running as a stand-alone entity as opposed to running alongside the men's competition.

The Sixers back up quickly with a game against last year's champions the Brisbane Heat on Saturday. Meanwhile, the Thunder will also have to regroup quickly and face the Heat in Sydney on Sunday.