Mark who? Like water off a Northern Englishman's back, Canberra Raiders hardman Elliott Whitehead drew a line under Mark Carroll's "dog act" comments by simply shrugging them off.

Whitehead didn't think he was lucky to be playing against the North Queensland Cowboys at Townsville on Saturday following his off-the-ball hit on Tom Burgess on the weekend.

Raiders coach Ricky Stuart named an unchanged squad to the one that South Sydney thrashed at Central Coast Stadium on Saturday, but moved Josh Papalii from the bench to take Luke Bateman's place at lock. 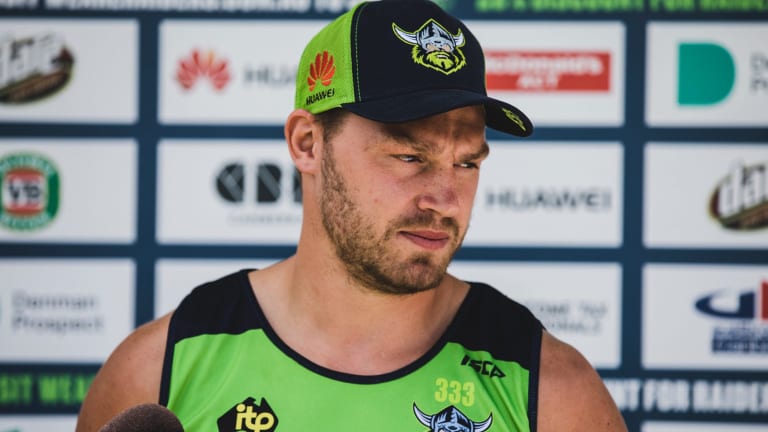 It meant he's picked the same 21 for three consecutive weeks.

Papalii's return to the starting side will see him go up against former Raiders teammate Shaun Fensom, who will make his NRL return from the broken leg he suffered in the Cowboys' grand final loss to the Melbourne Storm last year.

Fensom was named on the bench and replaced the injured John Asiata (pectoral) after just one game for the Townsville Blackhawks in the Queensland Cup on the weekend.

An early guilty plea meant Whitehead had 90 carryover points, but he could be picked to face the Cowboys.

But Whitehead was completely unfazed by Carroll's comments – given he had no idea who the former Rabbitohs prop was.

Carroll played nine Tests for Australia, seven State of Origins and 185 NRL games – almost half of which were for the Rabbitohs.

He dismissed questions about whether he was lucky to be facing the Cowboys.

"Not really. I expected Tom to get the ball and I probably committed and felt like I couldn't pull out when I got there. I'm playing this week now so that's all that matters," the England international said.

The Raiders face the Cowboys on the back of a nine-game losing streak in Townsville.

Whitehead was expecting North Queensland to be bolstered by their 26-14 victory over the Gold Coast on the weekend, which snapped the Cowboys' five-game losing streak, but he was still confident they could get the win.

Only points difference separates the two teams on the NRL ladder. They both have two wins from the opening seven rounds.

Whitehead said penalties had proven costly for the Green Machine last week, allowing the Souths pack to get on top.

"We all know our forwards we let ourselves down this week and we've got a chance to fix that up," he said.

"You can't write the Cowboys off if you saw what they did last year when they had all those injuries and they got all the way to the grand final.

"We know it's going to be a tough test, but we'll be putting everything into getting the two points so that's all that matters."