Through the first three games of the World Series between the Los Angeles Dodgers and Tampa Bay Rays, a common theme emerged: one team took a lead and held on despite late charges by their opponent. The series lacked the theater and strategy of a seesawing, white-knuckled contest.

Until Saturday. Game 4 — a 8-7 win by the Rays that evened the series at two games apiece — made up for the lack of drama, and then some, with a back-and-forth game that ended in thrilling chaos.

With Tampa Bay trailing by 7-6 with two outs in the bottom of the ninth inning, Dodgers center fielder Chris Taylor misplayed a single by Rays pinch-hitter Brett Phillips, which drove in Kevin Kiermaier from second base, tying the score. Right behind Kiermaier was Randy Arozarena, who seemed to be in position to make it home for the winning run — until he tripped and fell after rounding third base.

But in a second round of luck for the Rays, Dodgers catcher Will Smith also misplayed the relay throw, allowing Arozarena to hop up, slide home and give the Rays an improbable come-from-behind victory. Watching from the dugout, Dodgers Manager Dave Roberts took off his hat in disgust as the Rays celebrated having tied the Series at two games apiece.

“I saw Randy slip, and I was like ‘Ah, shoot, at least we tied it up,’” Phillips said in an interview on FOX after the game. “And then he missed the ball, and I don’t know what happened, but then he scored, and next thing I know I’m airplane-ing around the outfield and I get dog-piled.”

It capped a wild night of alternating punches between the teams. With the Dodgers leading by 4-2 in the sixth inning, Rays second baseman Brandon Lowe produced a three-run blast and the first lead change of this World Series.

The blows and counterblows continued for the rest of the night. A half-inning after Lowe’s home run, pinch-hitter Joc Pederson lined a two-run single — which clipped off the top of the glove of a diving Lowe — that pushed the Dodgers ahead, 6-5. Another half inning later, Kiermaier erased Pederson’s work with a game-tying solo blast.

In the subsequent half inning, Dodgers star shortstop Corey Seager drove a single into shallow left field off Rays reliever Nick Anderson that scored Chris Taylor and put the Dodgers back.

All seven of the Dodgers’ runs in Game 4 came with two outs in the inning. No other team since 1994, when M.L.B. first expanded the playoffs to include a wild-card team from each league, has scored as many two-out runs (57) in a single postseason.

But the Rays had a two-out rally of their own still to come, one that turned the game into a no-doubt classic and knotted up the Series. 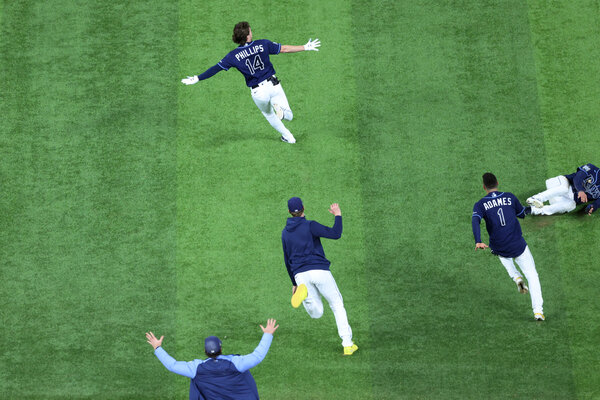 The Dodgers gave their starter, Julio Urias, a 2-0 lead with two solo blasts by third baseman Justin Turner and Seager off Rays starter Ryan Yarbrough. For Turner, it was his 12th career postseason home run, surpassing Duke Snider for the Dodgers record. For Seager, it was his eighth blast of this postseason, which momentarily tied him with Barry Bonds (2002), Carlos Beltran (2004), Nelson Cruz (2011) and Arozarena (2020) for the most in major league history in a single postseason.

Arozarena, though, quickly erased that. He smashed a first-pitch fastball from Urias over the wall right-center field wall for his ninth homer of the postseason. He has hit more home runs in 23 games this postseason than he has (eight) over 42 career regular-season games.

Arozarena’s two other hits on Saturday inched him closer to another major-league record: his 26 hits in these playoffs have tied him with Pablo Sandoval (2014) for the most in a single postseason.

Even before his mad dash home on Saturday, Arozarena was carrying the Rays’ offense this October. But he got some help on Saturday from Lowe, who was hitting .115 in the postseason entering the World Series, in the sixth inning. With Arozarena on base after a single and Ji-Man Choi drawing a walk, Lowe clobbered his game-changing blast off Dodgers reliever Pedro Baez.

The teams then traded the lead a few more times. Pederson drove in Seager and Turner with the single that Lowe couldn’t reach. Left in the game by Roberts, Baez left a changeup over the plate that Kiermaier deposited over the fence.

This set the stage for Seager in the eighth inning. Taylor doubled off Anderson, who then got two outs. Anderson threw a 2-2 fastball up high and inside to Seager, who drove it into left field. And with it, the Dodgers thought they had the lead they needed for their closer.

But in the ninth inning, Kenley Jansen gave up a one-out single to Kiermaier and walked Arozarena with two outs. Up came light-hitting, defensive-minded outfielder Phillips, whom the Rays acquired on Aug. 27 in a little-noticed trade with the Kansas City Royals. He drilled a single to center field for his first career postseason hit, and then chaos — and a Rays’ win — ensued.