A month ago Melbourne Storm were written off as a spent force but a record first-half score in their Anzac Day evening win over New Zealand Warriors shows their goal of back-to-back premierships is alive and well.

In a stunning first half, the Storm scored 38 unanswered points and set up their third consecutive win in a 50-10 victory over a bewildered Warriors at AAMI Park on Wednesday night in front of 25,731 supporters. 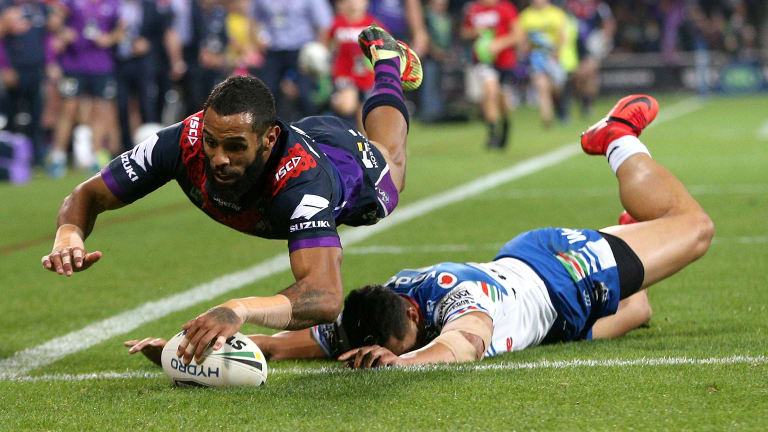 Josh Addo-Carr of the Storm scores a try under pressure from Roger Tuivasa-Shack of the Warriors.

That first 40 was a first-half record for the club at AAMI Park and in each game of their current winning streak they have scored 34 points or more. No Storm side has achieved that since 2012.To top it off, Billy Slater won the Anzac medal for best player.

The Warriors came onto the game as a premiership fancy behind a much firmer defence but on this night the reigning premiers were so good even a 15-man barricade wouldn’t have stopped them.

"It would be nice to be able to start every game like that for the rest of the year," Smith quipped post game.

Storm coach Craig Bellamy called it the most complete performance so far this season and he also praised assistant coach Adam O'Brien for his work with Smith, Slater and the other playmakers when forming the attacking plan each week.

"Adam handles the attack and he has done a wonderful job," Bellamy said.

"He gets together with Cam, Billy, Cameron Munster and Ryley Jacks and have a chat about the way we want to attack depending on what we see as our strengths and what the opposition might do.

"The two weeks before the last three weeks we scored one try and all of a sudden we are scoring 40, 34 and 50 so something has changed. The biggest change has been holding onto the footy but some of the work these guys are doing is outstanding."

The only negative for the Storm is the loss of Queensland forward Tim Glasby who injured his thumb in the first half and will have surgery on Thursday. Bellamy said he would miss four to six weeks with his injury similar to the one which sidelined lock Dale Finucane.

"That was "one of those nights" – particularly that first half," Kearney said.

"They really jumped out of the blocks early and we couldn't find our way back into the contest. They executed really well and had a lot of possession. I didn't think our defence was up to standard, we have set ourselves a fair standard in the last six or seven weeks and we paid the price for [not meeting] it in that first half."

Momentum is something the Storm are forever searching for and this night they had so much they almost ran themselves into exhaustion before half-time with six tries, 61 per cent possession and an 80-metre run from winger Josh Addo-Carr past five defenders.

Captain Cameron Smith chose to kick a penalty goal late in the half just to give his side a rest from their attacking urges while the Warriors linked arms and wondered what had hit them.Despite entering this game without premiership stars Jesse Bromwich, Dale Finucane and try-machine Suliasi Vunivalu, the Storm will enter next week’s round nine as the talk of the competition.

What will please the Storm most was their replacement players were leading the charge during that amazing first 40 minutes as stand-in winger Young Tonumaipea, new half-back Ryley Jacks and bench forward Christian Welch were all among the try scorers with Cameron Munster, Billy Slater and Cameron Smith calling the shots in attack.

Jacks started with a try in the fourth minute then forward Ryan Hoffman scored his first try in an Anzac Day, despite having played in almost all 10 of the games during his career with the Storm and the Warriors, when he picked up a bouncing ball to score in the 13th minute.

From there the Storm were almost untouchable as Welch, Slater and Tonumaipea scored majors between the 17th and 21st minutes before Addo-Carr’s show-stopper topped off the half.Losing hooker Isaac Luke to a possible knee injury severely hurt any comeback hopes for the Warriors, who were already without Shaun Johnson and Tohu Harris.

While the Warriors were stunned in the first half, they were much better in the second, dominating the opening stages scoring a try via David Fusitu’a and having several other chances snuffed out by the Storm.

Fusitu’a would score again on the hour and just before that the Storm lost star centre Curtis Scott to a right ankle injury, he will need further assesment but could miss a few games.

On 63 minutes Slater set up Addo-Carr for his brace before teaming with Sam Kasiano to put Jacks through for his second try with seven minutes left to play.

The Storm beat Brisbane Broncos in Brisbane just five days before this game and they travel to Sydney to play ladder leader St George-Illawarra Dragons next Sunday.

The Storm play St George-Illawarra Dragons at Jubilee Oval next Sunday at 2pm.