Josh Hodgson is desperate to get off the training paddock and on the bus, but he knows he doesn't have to work himself into the ground trying to make it happen.

Hodgson was on the training paddock at Canberra Raiders headquarters as his teammates prepared to board the bus for the trip to Mudgee, where they will face the St. George Illawarra Dragons at Glen Willow Stadium on Sunday. 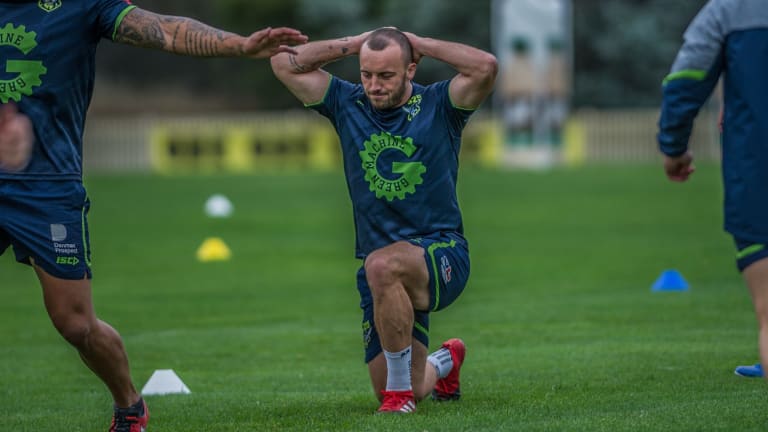 Josh Hodgson wants to be back in action.

The 28-year-old is on the comeback trail from an anterior cruciate ligament tear he suffered during the World Cup late last year, with Siliva Havili doing enough to be offered a contract extension in the meantime.

Croker says the Raiders have definitely missed the on-field presence of one of rugby league's premier hookers but the entire roster has been buoyed by the performances of Havili in his first season in the capital.

Now Havili has a chance to make a statement against his former club in the competition-leading Dragons when they meet in a regional clash.

"You’re always going to miss Hodgo, he’s a world class player and he has been one of our best players over the past couple of years consistency-wise as well," Croker said.

"We’re always going to miss him but the way Siliva has been going is a real bonus for us and it has given us a real confidence not to rush Hodgo back as well. It’s allowed Hodgo to take his time and not stress too much about it all.

"Knowing Hodgo, he’d be itching to get back out there but at the same time he knows he has been doing a lot of work with Siliva, and he knows he doesn’t have to rush back with the way Siliva has been playing."

Canberra's four wins so far this season have all come against teams ranked below them on the ladder and a clash with the firing Dragons looms as one of their toughest assignments.

Tongan international Havili played 10 games for the Dragons in 2016 and now he is determined to make a fist of his NRL career with his daughter Mausia proving to be the driving force.

He could be thrust into a different role when Hodgson returns – which could come when the Raiders face the Brisbane Broncos at Suncorp Stadium in round 16 – but the depth he will provide long-term will be invaluable.

Croker says the club won't rush the English international back into the frame – regardless of where they sit on the ladder.

But Raiders coach Ricky Stuart says Canberra need to put themselves in a good position so Hodgson doesn’t immediately feel the pressure of having to resurrect the Green Machine’s season.

"We haven't really put a time frame on it to be honest but he’s looking really good," Croker said.

"We don’t want to put too much pressure on him to get back, we want him to ease his way back into it. Obviously it’s a tough injury to come back from. We’ll just have to wait and see, take it a week at a time and see how he is going."