While Storm and Queensland skipper Cameron Smith called the prospect of Addo-Carr playing for the Blues “scary”, Slater admitted he had faced off with Addo-Carr at training and found himself caught short. 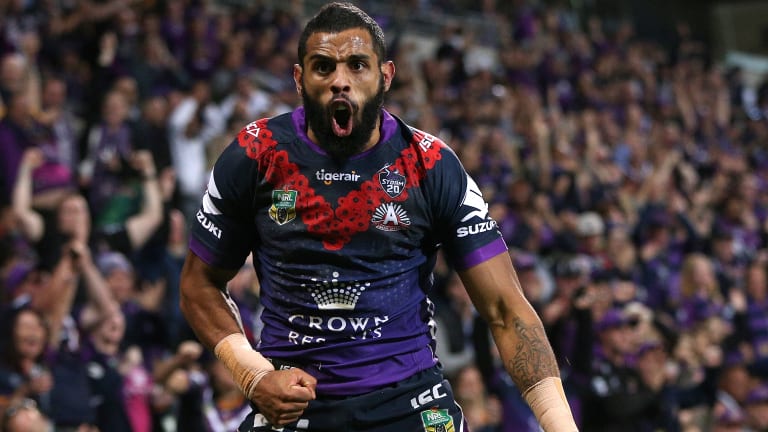 “He moves like no one else but his ability to change direction keeps you on your toes,” Slater said.

“Roger has that same ability to change direction on a 20-cent piece. It’s really hard when you are concerned about his speed on the outside then he will cut back and vice versa so that’s what makes great players. They keep you thinking.”

“I can’t remember the last time I saw someone score a try like that,” Bellamy said.

“He has scored a lot of long distance tries but he got ankle-tapped or pushed three times and was off-balance and to be able to regain his balance three times and then be able to go around Roger – it’s been a long time since I’ve seen a try like that. That was one hell of a try.”

While Slater was happy to talk up his teammates, he also beamed about winning his first Anzac Medal as best on field in the clash with the Warriors.

“It’s my first Anzac Medal and I’ve played in many of these games so to pick up the Anzac Medal is a privilege,” Slater said.

“It’s a great game to be a part of and focusing on the day itself is the main part, we are just a performance on that day which is an honour in itself.”

The Storm will face an even bigger injury list when they return to training next week as forward Tim Glasby is expected to miss four to six weeks with a thumb injury while centre Curtis Scott could miss a “week or two” after leaving the field with an ankle injury.

Jesse Bromwich and Dale Finucane are already out with injuries and winger Suliasi Vunivalu (hamstring) is hopeful of a return next Sunday week when the Storm face the St George-Illawarra Dragons.

Free bets and new offers on horse racing today: Get £20 bonus at Huntingdon, Leicester and Ludlow with BoyleSports