'Special feeling' got Gerrard to Rangers 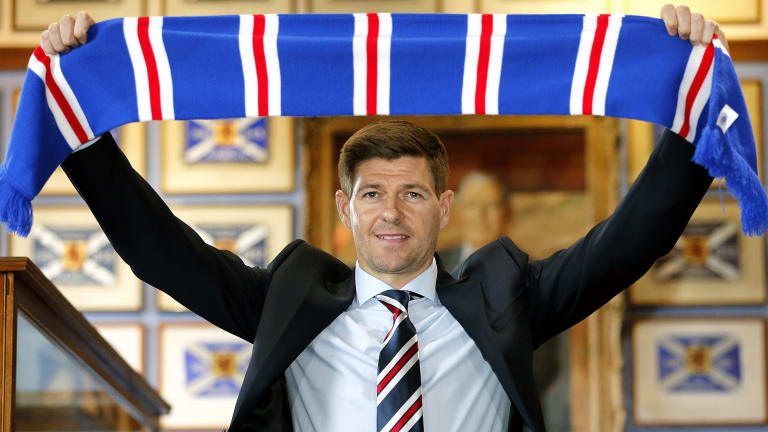 Steven Gerrard walked into the goldfish bowl of life as Rangers manager and declared himself ‘‘ready for the challenge’’ after revealing he had turned down eight other job offers before getting ‘‘a special feeling’’ about taking over at Ibrox.

The former England captain was unveiled in front of a crowd of 7000 as the 37-year-old quit his job as Liverpool under-18s coach to take on the daunting task of overhauling Celtic and his old manager, Brendan Rodgers.

Gerrard vowed to ‘‘leave his ego’’ at the door as he spelt out why he had taken the Rangers job after revealing he had turned down numerous offers to leave Liverpool.

And he also admitted that until Liverpool made him aware of the approach from the 54-time Scottish champions he had expected to stay at Anfield and to emerge as a potential successor to Jurgen Klopp.

When asked if he had been tempted to stay at Liverpool and be in the frame to manage the club, Gerrard replied: ‘‘Yes. I had probably as many as eight other opportunities to be a manager, to be a number two, to be a coach, which presented themselves since I came home from Los Angeles [Galaxy, where he finished his playing career], but I never got the right feeling from them. When Rangers came, it was a game changer.

‘‘The first phone call came from Liverpool. They made me aware Rangers had been in touch and wanted permission to speak to me.

‘‘It wasn’t a phone call I was expecting. I had a special feeling inside my stomach. My reply was ‘Yes, I would like the opportunity to speak to Rangers’.’’

If Gerrard was unaware of the excitement his arrival had caused then the reception he received would have changed that. There were so many supporters at Ibrox that police had to close the road outside the stadium, and when a fire engine raced past it prompted the thought this would have been an entirely apt mode of transport for Gerrard’s first managerial appointment.

He takes the job in the immediate aftermath of two crushing defeats by a Celtic side who looked as though they were operating in a different league from their ancient rivals, but as Gerrard pointed out, he has never shirked a challenge.

‘‘I have weighed the gamble up and the risk and I understand other people thinking it is because it is my first job in management, but I have confidence in myself that I can deliver for these supporters,’’ he said.

‘‘My parents brought me up in life to always front a challenge, if you feel like that challenge is the right one for you, go for it.’’

Asked if his heart had sunk while watching the beatings inflicted at Hampden Park and Parkhead, like everyone else connected with Rangers, Gerrard replied crisply: ‘‘I wasn’t connected with Rangers at that time. To be honest, where I sit right now, it’s not the right time and place for me to talk about Celtic. There will be plenty of time for that in the future when we move forward and we start the challenge from the new season. My priority is Rangers. I need to get this house in order, I need to produce a team and squad that’s capable of winning matches. I want the supporters to skip into this place to watch that team and be proud of them and to see that we can take the team and club forward and make it competitive.

‘‘That’s my priority, not what Celtic have been doing and not what other people have been doing in the league. I have to focus on every challenge that’s coming at us but for us to win those challenges and come out on top of them we need to sort Rangers out first.’’

Gerrard will not be Rangers manager until June 1, which means that the team’s three remaining matches will be the responsibility of Jimmy Nicholl, now acting as a caretaker manager for the third time in his career.

‘‘Gary ticks that box. I’m going to make mistakes. I’ve made plenty in my playing career, but I believe in the staff I’m going to be bringing to share this journey with me.’’

Of Rodgers, his erstwhile manager and mentor, there was only a fleeting mention.

‘‘I’m not sure how the relationship will change,’’ Gerrard said. ‘‘Right now everything is fine. I really enjoyed my time as a player under Brendan and I have nothing but respect for the man and the coach.

‘‘The way I see it, it’s a very exciting challenge for myself to go up against not just Brendan but the other top managers in the league and the managers around Europe.’’