NBA championship winner Andrew Bogut is coming home to the NBL next season after signing with the Sydney Kings.

The club and the player are expected to announce details of the move at a press release on Monday morning – but whether he has signed for one season or more, luring Bogut back to Australia is a huge endorsement for the Kings and the NBL.

The Kings put out a tweet on the signing on Sunday night.

The 33-year-old centre had said he was keen to play at least one more year in the NBA and then retire to Australia as he is focused on remaining in the Boomers side for next year’s FIBA World Cup in China and the 2020 Tokyo Olympics.

Joining the Kings may not completely end Bogut's NBA career as he could conceivably play in Australia until late February or early March and then sign with an NBA championship contender for the final month of the season and the playoffs.

But whether that is his plan remains to be seen.

With his young family having their support network in Australia and Bogut looking to the next step in his career, the Kings have pounced and signed a player who has long admitted his love of the club dating back to his childhood in Melbourne.

With past NBL most valuable players Kevin Lisch and Jerome Randle both under contract for next season, along with promising Australian junior guard Tom Wilson, the Kings with Bogut and another two skilled imports will immediately be a title contender for next season.

The signing will also see Bogut teamed with Australian legend and Kings coach Andrew Gaze in a city the NBL has yet to win over. 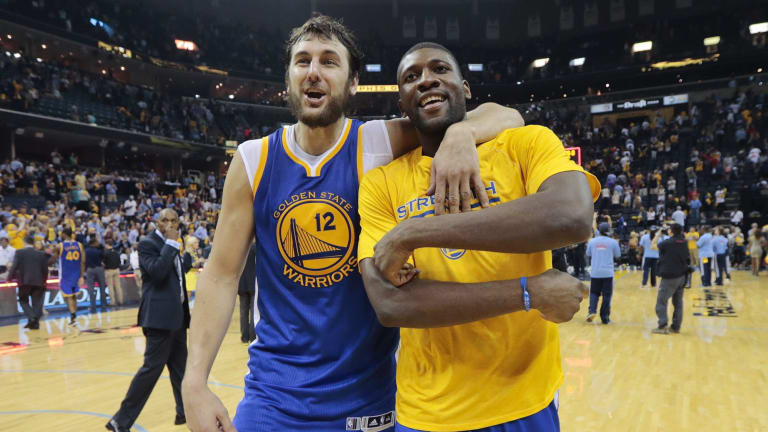 Halcyon days: Andrew Bogut celebrates with Festus Ezeli after the Warriors beat the Memphis Grizzlies in the playoffs in 2015.

Bogut’s signing is a win for Australian basketball. Fitness will be the only question and Bogut has repeatedly said he is fit, strong and aiming to be a factor for the Boomers as they chase international glory over the next three years.

His quest for an Olympic medal will also push him at NBL level and that should make the already improved Kings an even stronger force in 2018-2019.

Only last week, Bogut told Fox Footy's On the Mark program that he wanted to help to spark more interest in Australian basketball.

"I think to come back and maybe play a season or two would be the icing on the cake for my career," he said. 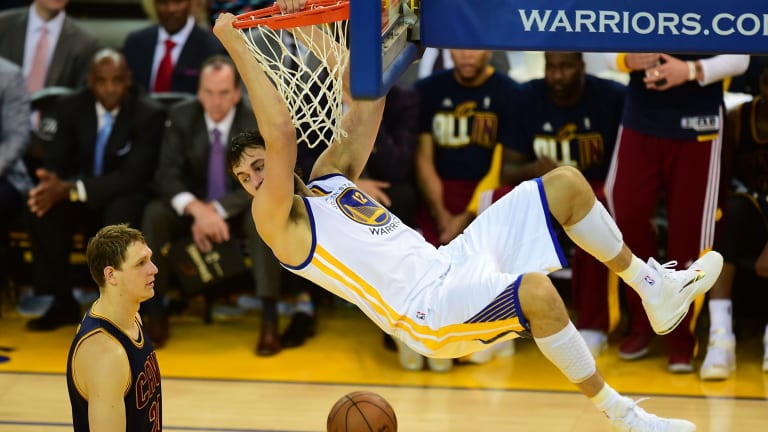 Hang time: Bogut clings to the rim after getting past Timofey Mozgov of the Cleveland Cavaliers.

It's been a long 13 years since the Kings won the NBL championship following three straight titles between 2003-2005 and they've missed the finals for the last five years.

It's also been 13 years since Bogut debuted with Milwaukee as a 21-year-old.

After seven seasons with the Bucks, he was traded to Golden State where he won a championship with the Steph Curry-led Warriors in 2015.

The 2.13m Melbourne-born Bogut was then traded to the Dallas Mavericks the following year and after one season moved on the Cleveland, where he broke his left leg 56 seconds into his Cavaliers debut.

Late last year, Bogut signed with the LA Lakers but was waived by the club in January this year.

Last month, Bogut announced he wouldn't return to the NBA for the ongoing 2017-18 season because he wanted to stay in Australia with his pregnant wife.

Bogut was close to pulling on a Sydney Kings singlet in 2011 during the NBA lockout.

He was keen to play in the Australian league but the insurance required to cover his lucrative Bucks contract became a roadblock to the short-term stint.