Home » Sport » From teammates to opponents: No more spooning for Thwaites, Weston

From teammates to opponents: No more spooning for Thwaites, Weston

Australian Diamonds teammates Caitlin Thwaites and Jo Weston spent much of the past month as roommates in their apartment at the Commonwealth Games or at games and trainings.

As two of the taller members of the Diamonds, their snug room soon led to plenty of jokes. 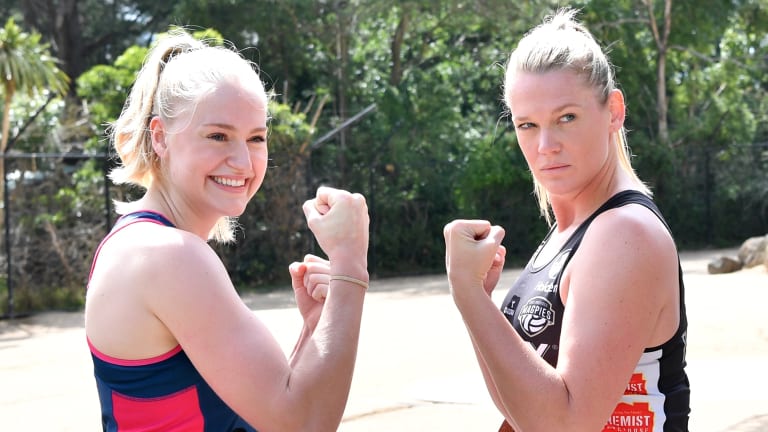 Diamonds teammates Jo Weston and Caitlin Thwaites will switch mindsets when they face each other in the Super Netball competition.

Officially the two players are listed as 188 centimetres tall although Weston relegated herself to “little spoon” status.

“We were actually roommates and those [Commonwealth Games] apartments aren’t very big so we were sleeping very close to each other – big spoon on little spoon, Jo?” Thwaites joked.

But when Thwaites (goal shooter for Collingwood Magpies) and Weston (goal keeper for Melbourne Vixens) run out in Saturday’s Super Netball season opener at Hisense Arena, they will be shedding the jokes and the roommate mindset .

“We are getting pretty used to doing that, saying 'which hat do I have on today?' and realising we are enemies today and friends the next,” Thwaites said.

“I think that white-line fever comes into it and you respect your teammates and your opposition very highly and then just go about your business.”

Weston added that the pair were often paired up during scrimmages at training so had spent a good bit of the past month competing against each other despite being teammates.

“Although we are teammates there, in terms of selection and combinations you always want to put your best foot forward in those scrimmages,” Weston said.

This Saturday’s clash will also be a compelling look at how both sides have improved and offer a first glimpse at whether either of them can establish themselves as premiership contenders during the early rounds.

Last year the Magpies and Vixens were both knocked out of the finals and those defeats haven’t been forgotten in the almost 10 months since last June’s finals.

“To set our baseline at making the semi finals [in 2017] was a great base to start from and we are looking at building on that,” Thwaites said.

“The fact we have had more time together as a team and been able to problem solve and have those connections is an improvement and our skills under pressure was something else that hurt us last year, so having that time to work together has been good for us.”

Weston said the Vixens wanted to atone for being minor premiers then falling out of the finals in straight sets.

“We had a hard look at that in review last year and at the start of preseason, which seems quite a long time ago,” Weston said.

“We have learned a lot from that, especially as our playing group is quite young, so having that finals experience, so performing under pressure and having that consistency across court should help us finish games.”

If Weston needs any further motivation for Saturday, she is an avid Essendon AFL supporter and despite being at training during her team’s painful loss to Collingwood on Anzac Day, she wants to end her week with at least one win over the Magpies.

“I kept giving the side-eye to one of our staff members for score updates during the game but once I saw it was unravelling I said 'no more updates please',” Weston said.

“Potentially it could be [motivation].”

The Vixens and Magpies open the Super Netball season at Hisense Arena on Saturday at 3pm.