Home » Sport » The Connecticut Sun Are Fueled by Feeling Disrespected

Curt Miller knew it was time for a family dinner.

The Connecticut Sun coach and his team gathered in their meeting room in the W.N.B.A.’s bubble at IMG Academy in Bradenton, Fla., a few weeks ago. They held a productive film session. Over a catered meal and drinks, they dove into a wide-ranging group discussion that Miller described as human and vulnerable.

“I’ve been around basketball a long time,” Miller said, “and never, never have I been in the moment and knew something changed.”

It was a significant off-the-court breakthrough during a turnaround season for the Sun, who are on the verge of their second consecutive W.N.B.A. finals berth after beating the top-seeded Las Vegas Aces, 77-68, on Thursday to take a 2-1 lead in their best-of-five semifinal series.

Connecticut made the playoffs as the seventh seed, with a roster mix of veterans with championship experience and young players forced into big minutes. The Sun won two single-elimination games as the lower seed to reach the semifinals, and have pushed Las Vegas, a title favorite, to the brink of elimination entering Sunday’s Game 4. And they have reached this point even though the two-time All-Star forward Alyssa Thomas dislocated her right shoulder early in a Game 2 loss. She fought through pain in the Game 3 win to stuff the box score with 23 points, 12 rebounds, 4 assists and 3 steals.

Even though the Sun have evolved into one of the W.N.B.A.’s more consistent franchises, they still believe they are fighting for respect.

“It’s been like this my whole career in Connecticut,” Thomas said. “Even with a two seed last year, they still counted us out. So for us, it’s just added motivation. But we know we’re capable. We know what we have in this locker room, and we know that we are a great team.

“I think we’re proving that each and every night that we step out on this court.”

The Sun have been using perceived disrespect as fuel for the past couple of seasons. It reached a peak during last year’s playoffs, when an ESPN commentator called Connecticut a team of “role players” while point guard Jasmine Thomas was on set as a guest analyst because the Sun had earned a double-bye to the semifinals. 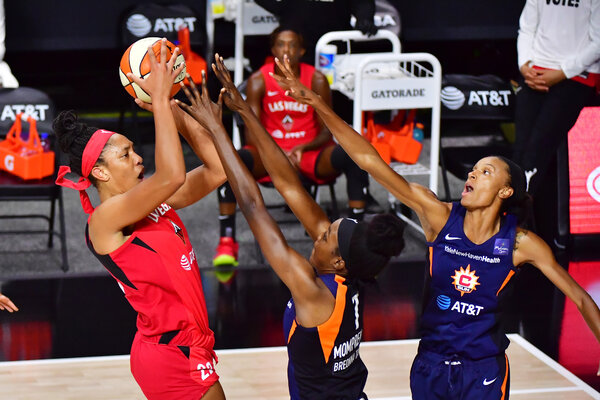 The team began using “DISRESPECT” in official marketing, bolding the “CT” at the end as a nod to Connecticut. The Sun rode that mentality to a decisive Game 5 in the finals, before falling to the Washington Mystics.

During free agency, the Sun appeared to be building another title contender.

They added the veteran forward DeWanna Bonner, a three-time All-Star and two-time champion, through a sign-and-trade with Phoenix. And they still had Thomas, who is nicknamed the Engine because of her rugged competitiveness and versatility in defending all five positions, scoring and facilitating.

But the two-time All-Star center Jonquel Jones, who led the league in rebounding and blocks in 2019, opted out of the season because of concerns about the coronavirus pandemic. Guards Briann January and Natisha Hiedeman were out early after testing positive for the virus. The Sun lost their first five games, a deep hole in a truncated 22-game season.

“That emotional side kind of takes over,” Bonner said. “It’s kind of like, ‘Man, we’re in this slump.’ The energy around the team was just OK. People were starting to fade out a little bit.”

Bonner said the team got a big boost from the return of January, a veteran known for her tenacious on-ball defense and positive leadership. Miller countered the mental toll of the bubble environment with humor by wearing wacky, colorfully patterned shirts on the sideline. Players on the bench began orchestrating elaborate celebrations for big plays, like pretending to faint or bunny-hopping in a line.

Earlier this month, Miller wanted to take advantage of a light recovery day between games. It was time for the family dinner. Players and staff members sat in a circle, where Miller said “we all learned a little more about each other.”

Connecticut finished the regular season 10-12, leaning on a defense that ranked fourth in the league with 99.5 points allowed per 100 possessions. The Sun beat sixth-seeded Chicago, 94-81, in the single-elimination first round, then blew past third-seeded Los Angeles, 73-59, to advance to the semifinal series. Connecticut dominated Game 1 against Las Vegas, 87-62, then lost an 83-75 heartbreaker in Tuesday’s Game 2 with Thomas sidelined.

Thomas was already playing with partially torn labrums in both shoulders. But when she hit the floor in visible agony less than five minutes into Game 2, the Sun adjusted on the fly, at times playing three lineups that had never shared the floor together. Rookies Beatrice Mompremier and Kaila Charles were part of the rotation. Jasmine Thomas played through plantar fasciitis, while January wore a brace protecting a dislocated finger. Alyssa Thomas joined the bench late wearing a sling, and watched as A’ja Wilson, the newly crowned most valuable player, collected two big and-one layups to propel Las Vegas to victory.

During a long staff meeting on Wednesday, Miller implored his assistants to “challenge” him on how to make better tactical moves. But he described the day’s film session as lighthearted. Following Thursday’s shootaround, Bonner said the team was “pretty damn confident,” though Miller was eager to see how it would respond to a punch from Las Vegas.

Leave it to Alyssa Thomas to provide an early dose of grit.

After a magnetic resonance imaging exam revealed no new structural damage to her shoulder, her status rapidly elevated from out to questionable to in the starting lineup.

With her shoulder heavily taped up, Thomas dished an assist to Bonner in transition and hit a runner in the lane early. She fought through contact to convert two and-one layups in the second quarter.

Then, she spearheaded the Sun’s rally from 7 points down with less than five minutes to play in the fourth quarter. She hit two go-ahead buckets in less than a minute of game time. She later sealed the victory with another driving finish with 48.9 seconds to play, before swiping a steal and drawing the foul on the made layup.

Thomas said her shoulder injury “wasn’t going to stop me.”

“I think we have a great opportunity in this series, and I want to be a part of it,” she said. “Once I heard that it was up to me, I knew I would be out there.”

Earlier this week, Miller said his team felt a duty to win for Thomas. Her gutsy return Thursday embodied Connecticut’s resiliency. They are one win away from returning to the finals.

Add that to the Sun’s push for W.N.B.A. respect.

“This group has a confidence,” Miller said. “They have, not a cockiness, but an air they belong.”