Home » Sport » The night in Melbourne that redefined a rivalry

The night in Melbourne that redefined a rivalry 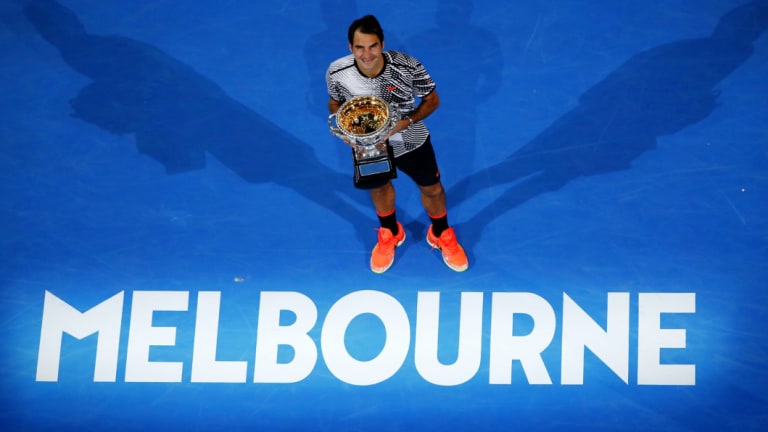 Of the 20 grand slam titles he owns, Roger Federer singles out three: the first at Wimbledon, the solitary French Open title, and the Australian Open of 2017, when he overcame his own absence from the game and his nemesis Rafael Nadal, in a contest that drew more than 20 million viewers on Eurosport’s broadcast alone, the most for a tennis match in that network’s history.

This was the tennis answer to the ‘‘Thriller in Manila’’, the storied third Ali-Frazier fight of 1975, except rather than a last hurrah for two beaten-up warriors, this chapter marked the beginning of a mutual regeneration, of an Indian summer that saw Federer turn his 17 majors into 20.

‘‘Honestly for me, it will go down as a top three most epic matches and tournaments, maybe my favourite tournament ever besides the French Open or my first Wimbledon final,’’ Federer told the Sunday Age on Friday. ‘‘It was that epic.’’

The five-set conquest of Nadal evoked what what Federer described as ‘‘amazing feelings’’.

He had come to Melbourne with low expectations, following a six-month hiatus in 2016 when he struggled with a knee injury.

‘‘It was a complete surprise and it was definitely massive … obviously when you’re injured, when you have the year that I had the year before, naturally you can’t win a slam, you know.’’

Federer had not won a major since the Wimbledon of 2012. Nadal, too, had been battered and without a ‘‘slam’’ title let alone an appearance in a slam final, since 2014; at the end of 2016, Andy Murray had supplanted Novak Djokovic as the world No. 1.

Who would have thought then that both Nadal AND Federer would outlast Murray?

While the Federer-Nadal Wimbledon final of 2008 has been hailed as perhaps the greatest match of the age, their Melbourne meeting, eight years after their 2009 Australian Open final, might prove more consequential; certainly, it recalibrated the rivalry and, depending on what happens next, might be retrospectively viewed as the ‘‘GOAT game’’ – the one that handed Federer, hitherto largely eclipsed by Nadal’s power and constancy, the unofficial title of ‘‘Greatest Of All Time.’’

Federer said the 2017 final had involved ‘‘a mental battle’’ against Nadal, as he strove to play the ball, ‘‘and not the opponent’’.

Perhaps by ignoring history, he would remake it. 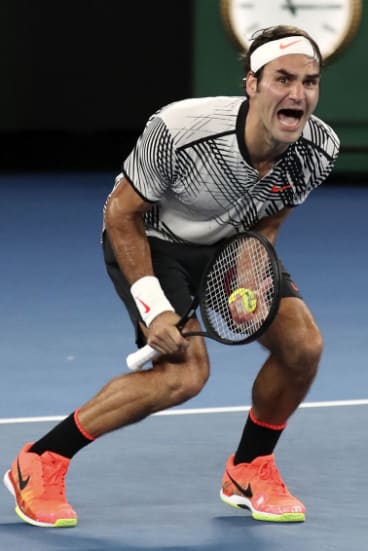 Federer, afflicted with that knee, came to the Australian Open seeded a lowly 17th. Nadal was the ninth seed; tennis was ready for that belated – and still unrealised – changing of the guard. En route to the final, Federer had beaten Kei Nishikori (quarter-final) and compatriot Stan Wawrinka (semis) in five bruising sets, and there were doubts about how the Old Man of the Net would withstand another brutal five-setter against iron Rafa.

In the days before the final, Federer and his camp decided that the then 35-year-old – who had surprised himself over those two weeks in Melbourne – would play the match on his terms against Nadal. This meant that he would not play safe against Nadal; he would hit winners, or not.

‘‘That’s something we talked about before the match,’’ said Severin Luthi, Federer’s coach and confidant. ‘‘You want to have the match on your racquet. You decide if you win or lose the match.’’

Federer confirmed his mindset, adding: ‘‘And I wanted to play in a way that it felt that way. Because I played great against Nishikori and also Stan. So I felt like I had the game in me.

‘‘You know, the question’s like was the body OK after those two five setters already and the good thing is maybe also Rafa also went through an epic five setter against Grigor [Dimitrov]. So from that stand point, I also felt like that was square. And he also had come back from injury.

By January 2017, Federer had become accustomed to wielding the larger, now 97-inch frame racquet that he had first deployed in 2014. As he recounted, the larger racquet helped him better the backhand that Nadal had so often exploited.

‘‘I think with the new racquet I was able to swing through the backhand slightly, a bit more freely, but I did that the entire tournament you know.

‘‘And I think the racquet allowed me to do that and I gained confidence. And I think Rafa with his lefty play challenges me that way. No one player will challenge my backhand the way Rafa does and I think that’s why people looked at this match as a very different match that I’ve played against Rafa in the past.’’

Luthi said, with trademark understatement: ‘‘I think it was a good decision for Roger to change that racquet.’’ 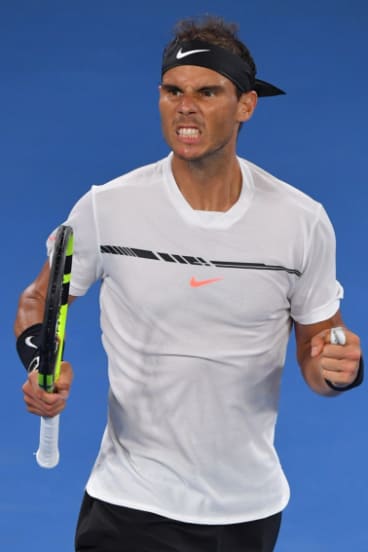 If Federer had harboured modest ambitions, Luthi, noting the improvement in late 2016, told his man in November or December: ‘‘You’re playing so good, I think you can win the [Australian] Open.’’ He also observed: ‘‘I think he maybe didn’t see himself winning a major.’’

Federer downplayed the extent to which he had varied his game for Nadal in 2017. ‘‘I don’t think so. No, I knew it had to be a good performance.

‘‘But I think I played equally well against Rafa in ’09 when I lost. In tennis, somebody at some point has to win and it always looks like the other guy broken down or didn’t play as good as last time. But actually I feel like when it mattered the most, I was able to raise my game.’’

One difference between Federer and Nadal that can be measured is the amount of energy each player expended during the 2017 final.

Intuitively, we can see that Nadal’s grinding, wristy baseline game is more taxing than fluent Federer’s. Now, there is data from Tennis Australia’s Game Insight Group – a joint venture with Victoria University – to prove the ‘‘energy’’ gap between the champions.

Nadal, according to the data – recorded via the same HawkEye that calls the lines (split into 25 frames per second) – expended 25-28 per cent more kilojoules than the cruising Federer over the five sets and three hours 38 minutes.

Tennis Australia’s head of innovation, Dr Machar Reid, said the energy comparison was based on ‘‘how far, how quick and the changes in direction’’ of the players. The workrate numbers show that Federer’s output per shot peaked in the fifth set (2.3 to Nadal’s 2.7), but that he was never using up as many ‘‘petrol tickets’’ as Rafa.

Federer also took a contentious injury time out at the end of the fourth set, as he had v Wawrinka in the semis. Criticised in some quarters (notably by Pat Cash), Federer responded then that his quad and groin were sore and had been so during the second and third sets, culminating in the time out. The Nadal camp did not object afterwards. 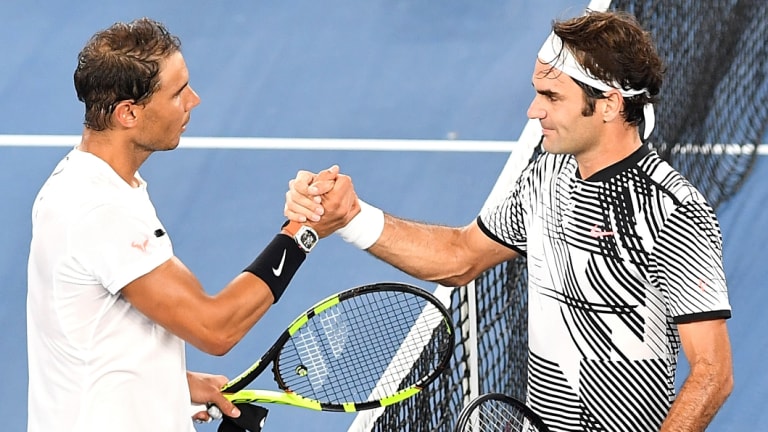 In any case, Nadal broke Federer in the first game of the fifth, as Federer soon found himself down 3-1 and confronting the grim prospect of losing another five setter, and of an unflattering career scoreline of 24-11 v Nadal.

Federer, acknowledging ‘‘my struggles with Rafa in the past’’, this time refused to accept a near miss. ‘‘Even though I was up the entire match until I was down 3-1 in the fifth and it would have been very easy for me to let my head hang and be disappointed and say like ‘Oh I was so close but anyway it’s been a great run’ – just sort of accept it and I don’t want to say not fight, but just go through the motions and just like be there.

‘‘But no, I said like ‘3-1, I break now and it will all change. I’ve played so well the last three hours or something that I can turn this around’.

‘‘So I felt very positive even though I was down in the score in the fifth.

‘‘My number one concern was just like, if I want to win I have to break right now.’’

Federer had adjusted his stance, too, for the 2017 Open. As Reid’s research found, the Swiss stood, on average, 50cm behind the baseline – basically on it – compared with 80cm behind the year before. As Reid explained, this reflected his willing to chance his arm and hit winners – with a more capable backhand – while shortening the reaction time of his opponent.

Federer, having fallen to Nadal three times in Melbourne – once before in the final, twice in the semis – and seeming gone as a prospective winners of majors, went on to win Wimbledon in 2017.
A year later, he successfully defended his title at Melbourne Park, eclipsing Marin Cilic in the final. After a slump, he had 20 ‘‘slams’’ and, at least temporarily, had opened up a decent gap v Nadal and Novak Djokovic in the numbers game.

Federer also went on a mini-streak v Nadal, winning their next three subsequent encounters. Had the ‘‘Reborn in Melbourne’’ been a momentum-shifter in their rivalry? ‘‘Maybe a little bit,’’ said Federer. 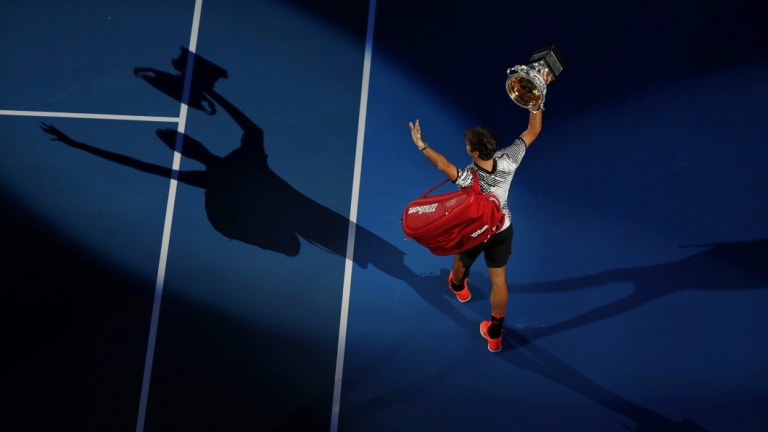 Federer soaks up the love from the Melbourne crowd.Credit:Alex Ellinghausen

‘‘You know, but I think you go in swings sometimes. I had swings against Novak, Andy, Rafa as well … you play in a short period of time and all of a sudden the other guy seems like he has to change all the other things around, even though it’s maybe not even the case.

‘‘I think I just played him the right way and Rafa, either I didn’t allow to play at his level or he just didn’t come to the level of Rafa in the past. Maybe also his game was in a transition where he was trying to recalibrate his game a little bit, be a bit more offensive, like we’ve seen him playing today.

‘‘I think these things happen. I’m not overly proud that I’m on a winning streak v Rafa. It’s good to have, but I don’t go to bed at night thinking like, ‘That’s nice to have’. Not at all.

‘‘I know that next time I play him, it will not feel that way at all.’’

Nadal, for his part, was characteristically gracious about the 2017 result, which he called ‘‘a special situation’’, observing ‘‘both of us came back from a very long time without playing tennis. Nobody expected that … but today is a different story.

‘‘We are back to the top positions, fighting for the things again,’’ Nadal says.