Third generation greyhound trainer Chris Priestley has "never done anything wrong" in his life but says he'll be made to feel like a "criminal" on Monday.

Priestley will race for the final time in the ACT before the sport is controversially banned in the capital following the Canberra Cup on Sunday. 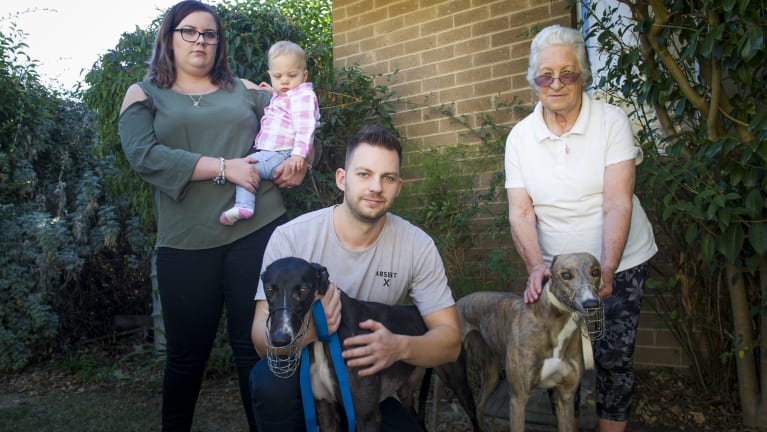 Greyhound trainer Chris Priestley with his sister, Jade Priestley and niece Ava, 13 months (left), with his grandmother Deidre Jenkins who has been a part of the greyhound industry for 44 years.

The 26-year-old said greyhounds and the gambling industry are all he's ever known and admitted he's not sure what he'll do next.

Priestley slammed the ACT government for implementing the ban without consultation and using the sport as a political football.

"I’ve been involved my whole life, mum and dad had dogs and my grandparents had dogs before that," Priestley said.

"My parents trained in Canberra and did most of their racing here and my grandparents the same, they did it professionally for a long time then came back to hobby train in Canberra.

"It’s just a very weird feeling, when Monday comes it will be weird doing something illegal because I've never done anything wrong in my life."

From Monday, people who are caught illegally racing greyhounds could be fined up to $15,000 or face a year behind bars.

Greyhound owners who want to continue racing over the border in NSW can continue to do so, but will need to apply for an annual greyhound racing controller licence.

"They're saying it might be illegal to have a greyhound in the back yard and that just doesn't make sense, it’s just stupid," Priestley said.

"They’re giving us all these laws and codes of practice and are just making it too hard. I might have to move over the border to Queanbeyan to continue doing something I enjoy.

"I’m not going to miss Canberra though because I think the government has ruined this place."

The Canberra Greyhound Racing Club has a temporary licence to operate at the Goulburn track from May 6.

Priestley has two dogs racing on Sunday and said the club will be dearly missed a social hub.

"It will be very strange when I leave the gates for the final time on Sunday," Priestley said.

"It’s just good to see all the other trainers out there when you train and race, it's like going to the pub with your mates but instead we go to the dogs.

"I’ve probably had 70 or 80 wins over six or seven years training which I know isn't that much but it's something I really love doing.

"My favourite dog was probably Fernando Bale but Brett Lee was pretty good as well."