Things were as charmed for Richmond as they were going awry for Melbourne. After a 67-point loss last week, it was for much of the game a more spirited effort, but still a 46-point loss.

At half-time against Richmond at the MCG on Anzac Eve against a mildly disappointing crowd of 77,071 given the forecasts but a flattering one given the performance, Melbourne had kicked two goals six. That followed from last week when they kicked one goal after quarter time against Hawthorn. 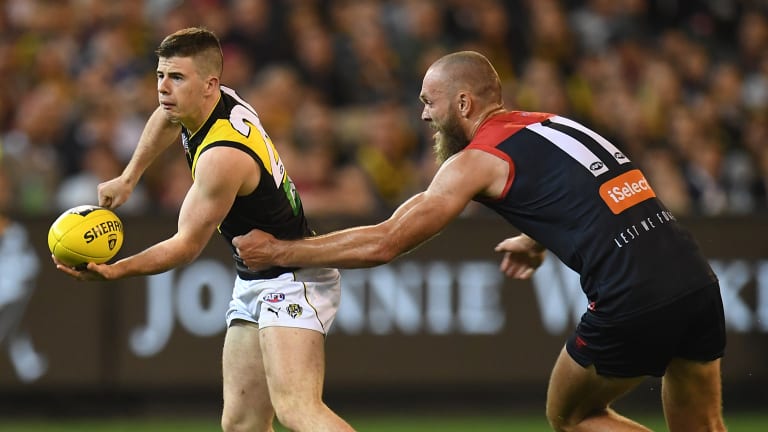 Unlike last week, when they were insipid, this time Melbourne were at least hungry for the ball. The problem was they appeared to come with little more than an appetite. There was a ragged plan once they got the ball other than to hack it for territory.

But then that is what Richmond does to teams. Richmond never looked like they got out of second gear until a burst in the last quarter, but they did not need to. They played a workman-like game but it was enough.

Bringing pressure is not enough against a side whose game is predicated on energy. You have to match Richmond in intensity but you have to have plans for moving the ball after that. Richmond will force the error and Melbourne volunteered those too readily. Richmond denied Melbourne time and Melbourne denied themselves the ball with their kicking.

In the first term Melbourne did most things right but the thing that mattered most: converting inside 50. They began like a team with a point to prove, but uncertain what that point was other than being furious at the ball. They played the better football for the quarter but wasted it going forward and mongrelled it in front of goal. They finished the quarter with one goal five and one out on the full.

Richmond had the better of the second term but did not put the game away. Dustin Martin was relatively quiet in the first term, then had six clearances on his own in the second quarter. Kane Lambert was strong in the term and only got better as the game went on.

Lambert possibly leads that next group of Richmond players below the star four who sneak up on you and deliver performances overshadowed by the stars., This night he stoodout of the shadow.Bachar Houli throughout was the counterpoint to all the turnover kicks.

Where Melbourne could not convert forward entries in the second term they began the third quarter with a centre clearance, a quick kick forward where Jesse Hogan marked inside 50 and kicked the goal. It was all so simple and all so different to the first half.

Melbourne booted the first two goals and clawed back to a goal down before Jack Riewoldt gathered a loose ball created by pressure from Lambert. Simon Goodwin had put Jake Melksham forward onto Alex Rance and tried to draw him deep to goal and out of the play. Melksham booted four goals which gave Rance something to think about but he did not deny Rance completely as the defender still roamed and repelled balls coming inside.

For three quarters it was a workman-like Richmond who weathered a hard-working Melbourne. Then it was a Melbourne side that stopped working and a Richmond one that opened the game up. Four goals in five minutes in the last quarter and seven for the term blew open the margin as Melbourne fell apart. Or more to the point were pulled apart by Richmond.

Richmond now has such inate confidence in their game, and the simplicity of their approach, that they will prevail if they just stick to it. So they stuck to it. They kept just putting the ball deep forward to a contest then getting numbers to it to work hard to keep it in and create opportunities for someone. It varies who that someone is.

Last night it was Jack Higgins, who now has five goals from 11 kicks in AFL football.