West Belconnen continued their unbeaten start to the Canberra Raiders Cup season with a 36-26 win over the Gungahlin Bulls at Kippax Oval on Sunday. 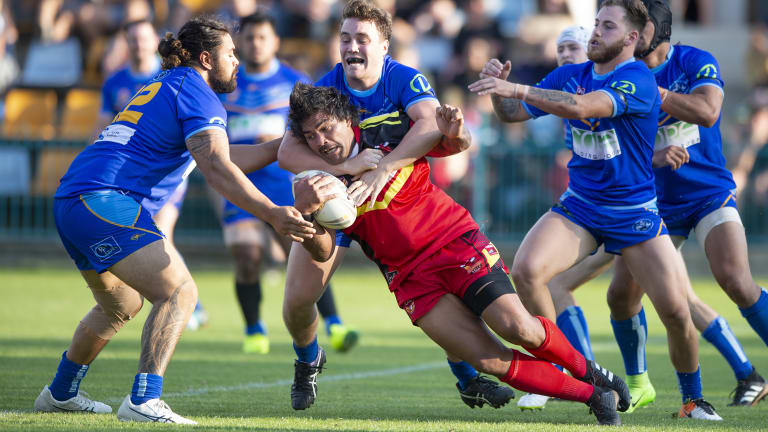 But Thompson says it was hardly anything to get excited about – in fact it was "a pretty poor game" compounded by four sin-binnings.

"We had two guys [Matt Kelly and Dustin Listser] sin-binned and I think one wasn’t warranted to be honest, he came in to help his mate off the ground and a Bulls bloke pushed him," Thompson said.

"Some [penalties] were warranted but at the end of the day he has evened them up which was fair enough. It was just a stop-start game, it was a pretty messy game, there was a lot of dropped ball from both teams.

"It’s not the referee’s fault. We as a club expect better than that performance but we were pretty poor in regards to our attack and defence.

"I thought it was a pretty poor game from both teams I reckon. There was a lot of penalties in the game, I think there was 28 penalties.

"We started off really well in the first 20 and just fell away. Our completion rate was less than 40 per cent which is just not good enough."

While it wasn't pretty, West Belconnen have continued their unbeaten start after they trounced the Queanbeyan Blues 40-0 last week.

But Thompson isn't taking any solace in that performance, because "we were terrible last week too". Barnstorming centre Tevita Aroha-Tuinauvai was one of very few shinings lights in the Warriors mentor's eyes.

Bulls coach David Howell says the hosts "copped the rub of the green with a few penalties", and while admitting some were warranted he was left scratching his head after Raston was sin-binned for a second time for a high tackle.

"The second one I thought was a bit harsh considering some of the things that have been let go over the past couple of weeks," Howell said.

"We’re just putting ourselves behind the eight ball to start which doesn’t help."

Woden were handed a penalty inside the final four minutes 40 metres out from the Yass line but opted against a shot at penalty goal in a decision they were left to rue.