The Irishman – who grew up as a Gaelic football star – only played his first match of Australian rules in 2010.

But due to a spate of injuries and retirements, the 28-year-old Tuohy is not only the most experienced member of the Geelong defensive unit named to take on Sydney on Saturday – he's played more matches at the top level than the other five combined. 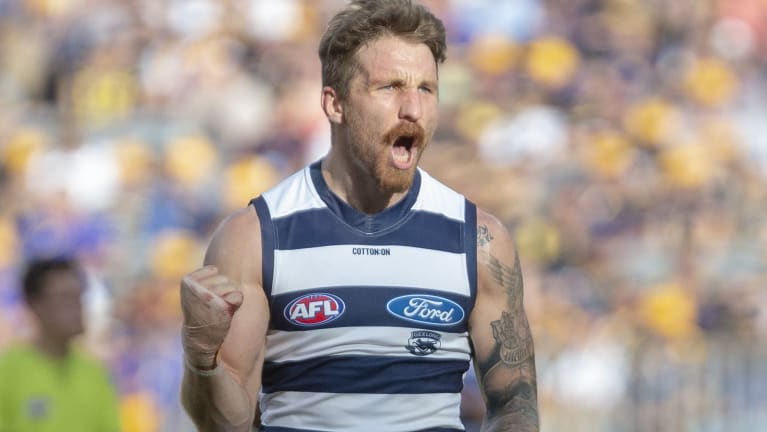 Zach Tuohy is the most experienced player in Geelong’s back line.

"Especially having just ticked over my 150th game last week, you let your mind wander a bit and drift back to when I first got contacted by Carlton and the AFL," Tuohy said.

"It is a bit odd, but any success I may have had can firmly be laid at the feet of the coaches who have helped me along the way."

With Harry Taylor and Lachie Henderson out injured, Tuohy has welcomed the opportunity to play a leadership role in a back six including first-year sensation Jack Henry and Jordan Cunico, who had only played one senior game before 2018.

"I'm really proud of the young group we have," said Tuohy.

"Jack Henry has been here for five minutes and the steps he's taken already are incredible.

"Tom Stewart has gone to a new level and Jed Bews has been around for a few years.

"I'm enjoying my new role but it's not just me leading down there. It's some of those younger guys too."

No one is pretending Franklin's absence won't be a huge loss for the Sydney attack, but it does give them a more unpredictable look, with mid-sized speedsters Gary Rohan and Isaac Heeney named in the key forward posts.

"They've got a quick forward line and obviously they'll be using different options than they would have done if Franklin was there.

"In a way it's a bit of a concern because they are going to take different avenues to goal."

The Swans are the only team to have defeated Geelong on their home deck in their past 20 matches – and they've done it twice in a row.

The Cats have taken a conservative approach with their leading goalscorer of 2018, Daniel Menzel, who misses with groin soreness.

But that loss has been countered by the return of Tom Hawkins and Cory Gregson.

The sixth-placed Cats and 10th-ranked Swans are among nine teams boasting 3-2 win-loss records on a congested AFL ladder.