After four quarters, four overtimes and more drama than any soap opera, Melbourne United overcame the Illawarra Hawks in Wollongong on Friday night.

Melbourne could have won it on the buzzer in regulation, but Dave Barlow’s three-point shot missed. That set the stage for an hour of extra basketball as the two clubs traded long bombs and untimely misses to force four overtimes for just the second time in NBL history. 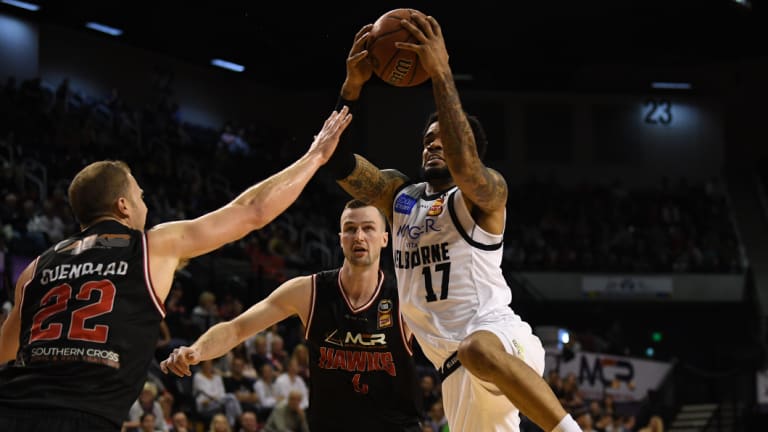 United’s US import DJ Kennedy looks for a shot despite pressure from Tim Coenraad of the Hawks.Credit:AAP

Finally, mercifully, Australian Boomers star Mitch McCarron made the plays that put the game in Melbourne’s hands, with a lay-up and then a three-point play late in the fourth extra session giving them a 123-122 win.

The Hawks had one last chance to win it all, but Jordair Jett and Kevin White missed their shots and Melbourne came down with the rebound.

Josh Boone led Melbourne with 24 points, 13 rebounds and five block before cramps forced him from the game. In the fourth quarter and early overtimes, Chris Goulding was the star for Melbourne, scoring 23 points before he fouled out.

New United import DJ Kennedy also showed why he has a reputation for making big plays in big moments, coming up with some pivotal efforts and 21 points in the win.

Todd Blanchfield led the Hawks with 26 points in 45 minutes, while Illawarra centre AJ Ogilvy showed he is ready for another big season with 15 points and 21 rebounds.

The only other four-overtime game in NBL history was in 1994.

Kennedy said he wanted to prove himself in his new league.

"I can't explain it," the American told Fox Sports. "My first game goes to four OTs and we come out with a win – it's amazing to be in a game like this. 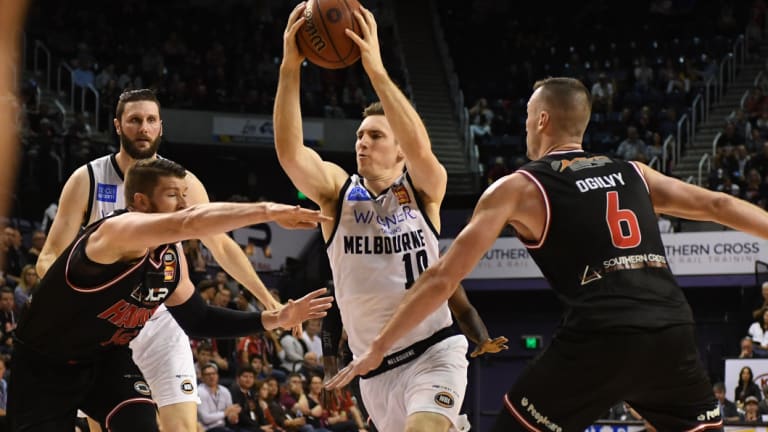 Mitch McCarron of Melbourne deals with some attention from Illawarra’s Brian Conklin and Andrew Ogilvy.Credit:AAP

"I just wanted to prove to my teammates, the general manager and owners that this is why they brought me here – I have been injured through the preseason, so I don’t think they had the chance to see me really play.

"There is a lot of pressure coming to a team who won the championship, so I have to play 10 times harder prove I have their backs."

In the first two overtimes, Chris Goulding made big shots only for Todd Blanchfield and then Brian Conklin to make clutch shots and force extra periods.

But in the third overtime, first Casper Ware overcame his struggles, nailing a long three despite making just three of 13 shots before that. Barlow then followed with a three and it looked like Melbourne were home, up 116-112 – but still the Hawks fought back to tie as Conklin hit a free throw and Jett a contested lay-up to tie scores at 116-116 with 2.2 seconds to play.

Boone could have won it all with a put-back on the buzzer of the third overtime, but his attempt couldn’t get over the rim.

Goulding was smiling and gesturing joyfully to the crowd post game, but he and Melbourne have a lot of recovery work to do between now and Sunday afternoon when they host the New Zealand Breakers at Melbourne Arena at 2.50pm.

The Hawks have it even tougher: they have to fly to Perth to face the Wildcats on Sunday night.