Home » Sport » Valeri and Arnold have history: for one, the season will end Saturday

Valeri and Arnold have history: for one, the season will end Saturday

When you have been around the top levels of the Australian game as long as Melbourne Victory captain Carl Valeri, you tend to have history with a lot of people.

Valeri and Sydney coach Graham Arnold go back a long way – and both could be involved in their last games for their respective clubs when Valeri's side meet the Sky Blues in Saturday's A-League semi-final. 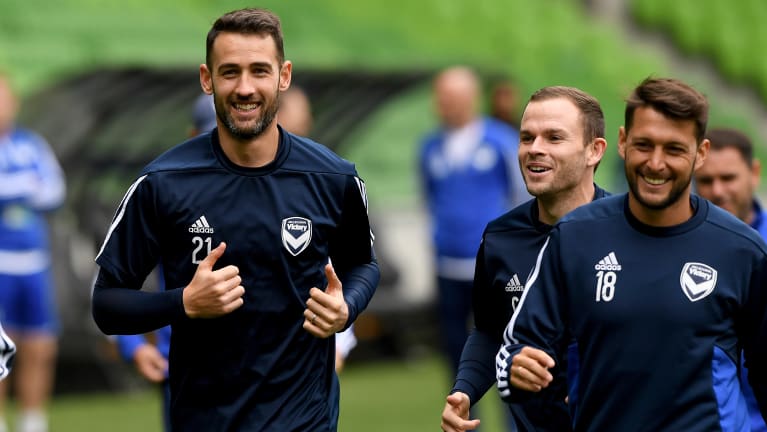 Valeri is out of contract at the end of this season and at 33 is yet to make a decision on his playing future.

Arnold will finish up with the Sky Blues whenever their season ends, either on Saturday or after the grand final the following week, as he is due to become coach of the Socceroos after the World Cup.

It was the Sydney boss who gave Valeri his international debut, picking him for the Socceroos in a game against China in Guangzhou in 2007.

Arnold at the time was so impressed with the then Italian-based Valeri's skills that he dubbed him his ''Mini-Vinnie'' – a reference to then Socceroos stalwart Vince Grella, then the No.1 choice in the holding midfielder spot in the team.

Valeri won't quite say it in so many words, but there is no doubt that he would love nothing more than to to end Arnold's current A-League career on Saturday night – and prolong his own season, irrespective of his future beyond the current campaign.

''I have a lot of history with Arnie like I do a lot of the players in the A-League. It's a fantastic league to play in, there's a lot of respect between the players, but coming to a grand final it's a big match.

''We are not thinking too much about anyone else, our main focus is on ourselves and what we can to do affect the game.''

Victory's long winless record against Sydney now stretches back to Australia Day 2016 – more than two seasons ago. That includes an agonising grand final loss last season in a penalty shootout.

That makes no difference in this game, says the Victory captain.

''We have been focusing a lot on ourselves, building and trying to improve on that each week. Our inconsistencies caused us trouble through the season and we found form at the right end of the season

''I think we have seen that towards the end of the season, especially with the Asian Champions League, some young boys coming in and really proving their worth, creating a lot of competition.

''What Sydney have done they deserve, they have had a great season, but like I said before, it's different circumstances. This could be our last game of the season, it could be theirs. We want to be in the grand final.

''It's going to be down to those key moments, who is willing to fight harder, do it harder, faster and better.

''We are prepared for that, we have had a great week on the training pitch, we are working hard for each other. We are confident, but we are very respectful.

Valeri's own future will not be resolved until some time after the season ends.

''I’m just taking every game as it comes. There’s plenty of time to think about that. In the A-League there’s two months of off-season.

"My main focus is getting Melbourne Victory into the grand final. My body feels good. Those decisions I’ll make with my family in the time I have off.''