Home » Sport » Victory get a pass: next two weeks will determine how high a grade

Victory get a pass: next two weeks will determine how high a grade

Whether Kevin Muscat and his men will go on to finish with a gold star and a high distinction will be determined by their fate at Allianz Stadium tomorrow evening. 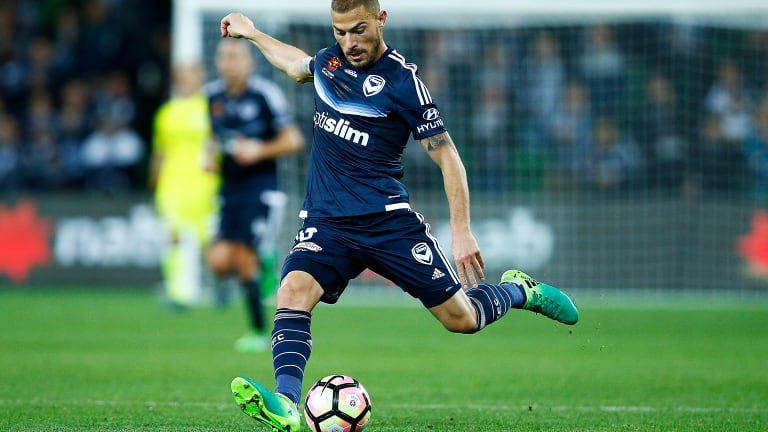 James Troisi’s form has been patchy this season.

Should they win and make a second successive grand final, the analysis of the campaign would be elevated.

Should they go on to win the title, then there would be no doubt about what kind of year they have had.

But as we stand, after 27 games and one final, Victory get a tick – if not for the consistent quality of their performances, then at least for their achievement so far.

This has been a lumpy campaign for Muscat and his team, but such is the measure of expectation around the competition's best-supported team that a fourth-placed finish on the ladder and a semi-final spot is considered just about par.

When they have been good this season, Victory have been hard to stop. Their 2-0 win over Newcastle in late December, the 3-0 triumph over Western Sydney in Sydney in January and the two derby triumphs over Melbourne City have been among their best results.

But there have been periods when they have left a lot to be desired.

Victory crashed out of the FFA Cup early, losing to Adelaide.

Then they took an eternity to get going this season and did not post a win until their round-seven triumph in Perth, when goals from Besart Berisha and Leroy George gave them the points after four successive draws.

And they were far from impregnable at home either, losing to Sydney twice, Melbourne City, Adelaide and Brisbane in front of their own fans. The last game was probably a nadir, losing to a then struggling Roar who fielded the oldest starting XI in the history of the league.

Whether playing a number of those games at Etihad Stadium helps the team is a moot point:  it's arguable that the players respond better to the intimate, smaller environment at AAMI Park.Muscat points out that Victory has been better in the second half of the season, and that is true.

That they were handicapped in the opening rounds by the loss, for international duty, of then midfield linchpin Mark Milligan, New Zealand forward Kosta Barbarouses and Socceroo attacker James Troisi, is undeniable.

The trio were away for several games in that winless opening first seven weeks of the campaign as they sought to help their countries make it to the World Cup, and that obviously had an impact on Victory's ability to compete against the best.

Any team would miss three of its best players; it's interesting to speculate how good Sydney might have been in that period had they been missing Milos Ninkovic, Adrian Mierzejewski and Bobo for that many games.

None of Victory's big names sparkled immediately after they returned.

Troisi's form has not been that of a player held in such high regard and he reached a low point for the season when he was benched for the Brisbane game. But he provided Victory's only high point in that match when he came on as a substitute and scored a contender for goal of the year with a long-range bomb that fuelled hopes, eventually dashed, that the hosts might force a late draw.

Milligan's return was short-lived, and once it became known that he was keen to chase a big-money deal in the Middle East, Victory's midfield was destabilised and he was not making the contribution expected.

Bringing in Terry Antonis as a replacement looks a smart piece of business: he is nearly a decade younger, and while not perhaps as dynamic as Milligan he has vision, good touch and plenty of footballing smarts.

Barbarouses has recovered his form and has been a significant contributor in the latter half of the campaign.

Victory's Achilles heel remains Sydney FC. The navy blues have not beaten the Sky Blues for more than two years but they have been unlucky on more than one occasion and really could have got something more than a point or an honourable defeat out of several of those games.

The knock on Muscat is that he has been reluctant to play young players, with numerous juniors serving a long apprenticeship before being given a first-team chance.

That might have cost them the services of Christian Theoharous, who is reportedly set to quit in the off-season for a move to Germany in search of more first team opportunities.

But kids such as Josh Hope, and perhaps Pierce Waring, if given more chances, along with late developers such as Kenny Athiu might be seen to more effect next year as Victory looks to support, or replace, some of their ageing big names.

The Asian Champions League campaign began with a bang, the 3-3 draw at AAMI in early February with Ulsan delivering plenty of fireworks. But it eventually proved costly. Had Victory secured all three points in that game they would have made it through to the knockout phase.

The club's chances of Champions League football hinge on them winning the grand final. If they could do that,  not only would they play in the ACL next year, but they would deny Melbourne City the chance to qualify: now for Victory fans, that would be a season to remember.