A night that started with unbridled hype and hope in the Hunter ended in heartache.The Newcastle Jets, playing their first grand final in a decade, crashed to 1-0 loss to Melbourne Victory at a heaving McDonald Jones Stadium last night. 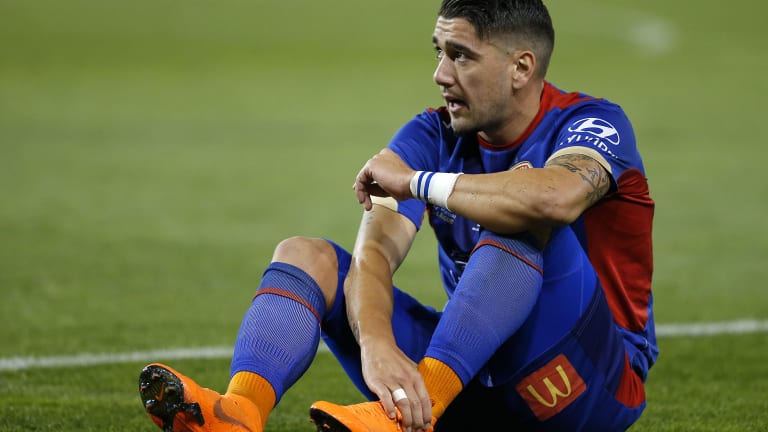 Gutted: Dimitri Petratos of the Jets.

The feel-good story of the A-League was unable to pen the final chapter, much to the disappointment of a parochial crowd of 29,410, the biggest to attend a football match in Newcastle. Victory needed 120 minutes to get past Sydney FC in the semi-final and their fighting qualities again came to the fore.

Keeper Lawrence Thomas was the hero, just shading stopper James Donachie.The shot-stopper was lucky not to finish the match with a broken jaw after a horror challenge from Jets striker Roy O’Donovan in the dying moments. Bruised and battered, and with his head wrapped like a mummy, Thomas somehow completed the game.

The game was not without controversy. Kosta Barbarouses scored the decisive goal in the ninth minute. Replays showed that Donachie was offside when he headed the ball across to the Kiwi but the video assistant referee did not overrule. The controversial non-call was of little concern to Victory and their coach Kevin Muscat.

The championship was Victory’s fourth and second under Muscat in four years.Victory had just two shots on target for the game, but grand finals are not won on statistics.They fought and scrambled and turned away wave after wave of attack from the home side.The Jets dominated for large periods in the first half, but went to the break down 1-0 down after a controversial goal to Kosta Barbarouses in the ninth minute.

Nigel Boogaard fouled Leigh Broxham near the left touchline. Leroy George swung a free-kick to the far post for James Donachie to head back across goal for Barbarouses. The Kiwi fired through traffic and his shot hot the out-stretched foot of Johnny Koutroumbis and into the net. 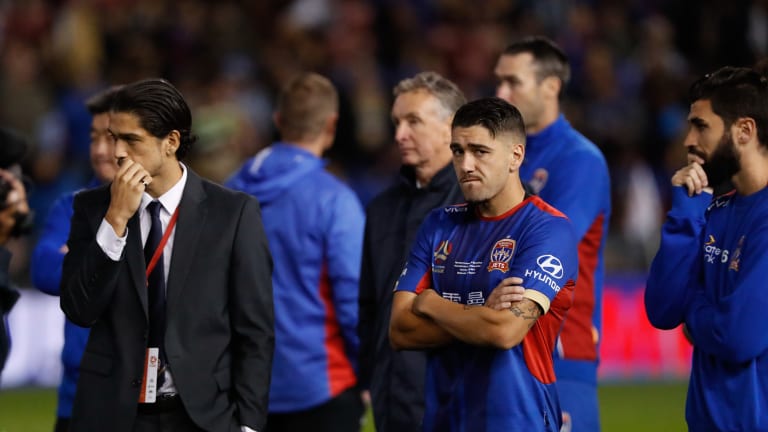 Tough loss: The Jets during the trophy presentation.

It was Barbarouses’’ third goal in four games against the Jets’ this season and the quickest in an A-League grand final. Replays showed that Donachie was one of three Victory players who were half-body offside. However, the VAR elected not to over-rule. It was Victory’s only shot on target in the half.

And if not for the heroics of keeper Lawrence Thomas, the home side would have at least been on level terms. The gloveman, who was brilliant in the semi-final against Sydney, made three world-class saves in the opening 45 minutes.

Jets striker Roy O’Donovan crashed a volley from eight metres and had started celebrating when the keeper full stretch to his left, and with the ball almost past him, got a strong hand up to turn it around the post.

Ronny Vargas was on a another planet for the Jets, twisting and turning past defenders and threading passes. But no matter what tricks Vargas and Dimi Petratos conjured they couldn’t find a way past Thomas.

The keeper produced a brilliant double save on the half hour, dropping to his left to block a Riley McGree rocket and then somehow rose off the ground to get his body in front of Jason Hoffman’s follow up.

The Jets had 64 per cent of possession and delivered 17 balls in to the area. Vargas, McGree and Petratos were outstanding for the Jets.

Leroy George was the most likely for the Victory, while Carl Valeri broke up play and made a number of vital intercepts.

The Jets were a goal down at half-time against City in the semi-final and bounced back to win 2-1.

The parochial home crowd did their best to lift the Jets against a dogged Victory who fought and scrapped and conceded fouls to slow down play.

The further the half went, the stronger Victory grew.

Needing to change the game, Ernie Merrick introduced Joey Champness for a tiring Vargas, with Petratos moving to the No.10 position.

O’Donovan needed treatment in the 70th after copping a stray elbow from Besart Berisha in a goal-mouth scramble. The Irishman had a lump on his cheek the size of a goal ball but played on. Thomas was the next to go down, after copping a knock to the head in the 75th minute. But nothing was going to stop him from seeing out the match.

O’Donovan delivered a header straight into safe hands of the keeper and replacement lifted a half-volley over the bar.