Wallace ready to fire again after harrowing year off court

Star Swifts shooter Sam Wallace has revealed how close she was to walking away from Super Netball last year and returning to Trinidad so she could be with her ill father.

Barely two months into the inaugural competition in 2017, Wallace learnt her father had suffered a stroke, which paralysed his right side, and the Swifts offered Wallace the opportunity to return home and be with her family. 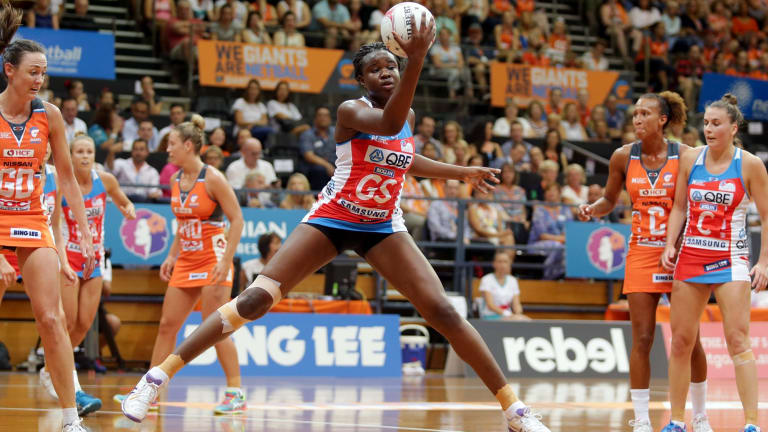 "When I spoke to daddy [online] his mouth was literally twisted," Wallace said. "Seeing your father and you can't touch him, you can't be there, I was devastated, I was in a mess.

"I try to come to training normal to be honest, [but] the girls know me so well cause they said what's wrong and from the moment they asked me what's wrong I started crying.

"I told them and they were like, wow, and they even offered me to go home and in the moment I was like, 'Yeah, I want to go home'.

"Then I talked to dad and he was like, 'No, stay, your mum's here, your brother's here, nephews. You go out there and make me happy'. And I was like, you know what, if he wants me to do this, I'm going to do it and that will make him happy.

"We have a close bond. I'm the only girl, so you know daddy and daughter always."

Wallace didn't publicly reveal her struggles last season, instead fighting on to establish herself as one of the league's dominant goal shooters.

Against the Queensland Firebirds on Sunday she'll be unencumbered by the emotional baggage that weighed her down for so much of last season.

Her little brother Okel has taken over the driving of their father Hendrickson's taxi, and Wallace said her dad is continuing to make progress in his recovery.

"Before I left I came to the beach and posted this emotional video on social media, and everybody was really teary, but I was really normal about it because I know he is feeling much better.

"He's talking, his face is much better, he's happy and that's the most important thing to me.

"He's walking and everything. He don't walk with the stick, he don't like to walk with that.

"For Christmas he was painting with his left hand.

"[I'm] just helping him pay his bills, just daughter duties. I can send back home money to pay bills, make sure he has food because I think he's waiting on public health system and back home in Trinidad it's really so slow, it can take a while.

"I'm just trying to support him as much as I can from over here. Compared to last year I'm in a much better space, I'm not stressed out, I'm really good."

Wallace believes the Swifts are also in a much better space 12 months on under new coach Briony Akle, who replaced Rob Wright at the end of last season.

"Some of us live with each other, we still hang out other than netball. We all go out together, we're with each other every day. Compared to last year, I feel like there's more unity.

"And having a head coach being more outspoken. She's just open minded to each and every one of us."