Chris Waller has a wealth of three-year-old talent but will split the Frank Packer Plate quinella of Higher Ground and Tangled between derbys in Adelaide and Brisbane. It took the judge to split them at Randwick on Saturday, with Higher Ground getting the nod from stablemate Tangled, which has now been placed in the Spring Champion Stakes, Rosehill Guineas, Australian Derby and Packer Plate. 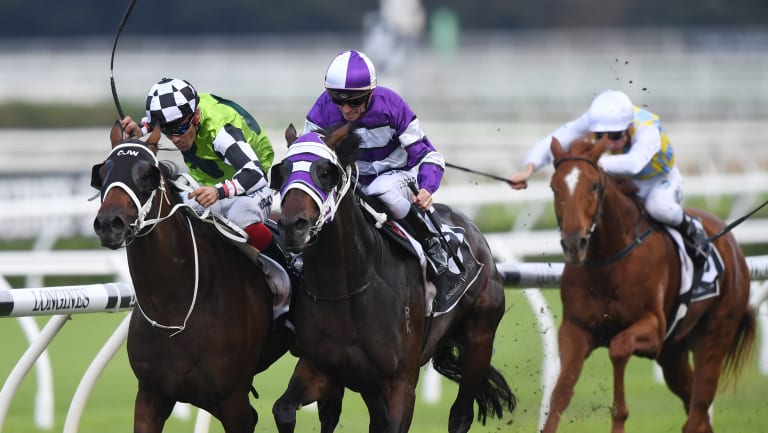 “Tangled might go to the South Australian Derby; he’s in good form and we know he will run the trip,” Waller said. “Higher Ground has been targeted at Brisbane for a while and although I haven’t used this race before to get there, he just showed he is a quality stayer.”

Glyn Schofield got his timing right in the lunge for the line on Higher Ground and believes the third-up run at 2000m will bring him on again. “He’s had a good blow after the race. I thought when he changed his legs 100m from home he was just going to surge to the lead and run away from them,” Schofield said.

“But the second horse obviously has group 1 form and it’s hard to get away from those horses who have performed well at the top level. He is going to improve off that run and the Queensland Derby looks a great race for him.”

In about 90 seconds Peter Snowden went from blowing up to planning a Brisbane campaign for Moss Trip as she arrived in time to win the James Carr Stakes at Randwick on Saturday.

The Mossman filly was slow to move but unwound with a powerful finishing burst to beat Dyslexic by a nose, which surprised the jockey on board the runner-up, Brenton Avdulla. “I thought I’d won it both sides of the post,” he said.

It was also a surprise for Snowden, who had all but given away the chances of his filly after a couple of strides. “I was blowing up at the start thinking she’d lost her chance there but to her credit on a day where it’s very hard to come from the back, to run the time she did, she’s done amazing,’’ he said.

“We will probably look at Brisbane now. We will just have a good think about things. See how she recovers; had a freshen up to get here today, so mindful of that – just need to take stock of her [over] next week.”

Kerrin McEvoy was full of praise for Moss Trip after the slow start. “She laid back in the gates which was why she began so slowly. I knew they were running along. Far out she let down, showed a good turn of foot,” he said.

James Cummings had to out-think Tally to get him back to the winner’s circle and the addition of the blinkers for the fourth time in his career to break a two-year drought in the JRA Plate on Saturday. Tally charged through late to win by three-quarters of a length from Nettoyer and Rising Red and will be aimed at next month’s Wagga Cup.

‘‘He’s been going alright at home and we’ve mixed things up with him, his gear and his work, and brought him here very fit,’’ Cummings said. ‘‘He’s deep into his campaign now but it’s great to see the old boy recapture a little bit of form.’’

Jockey Tim Clark admitted he was surprised at the halfway point when he looked up to see favourite Arbeitsam was not leading after he bungled the start. He was confident that Tally had something to give and he sprinted quickly when the gaps came.

“I looked up after we went passed the crossing and I couldn’t see Arbeitsam, I was a bit surprised, but they were definitely hiking along and set it up nicely for my bloke,” Clark said. “Once we straightened up, he saw a bit of daylight and he really dashed quickly, had a bit of look when he got there, but did a nice job.”

Whypeeo gave trainer Toby Edmonds a problem as he defied a big betting drift to score an easy win in the Mick Dittman Plate at Doomben on Saturday. Whypeeo went from a $1.75 to $2.50 in the last 10 minutes of betting before his four-length romp from Meikas and Marble, which may see Edmonds change plans for his next start, which was going to be in the Gold Coast Guineas

‘‘But we will have to look at running in the Doomben 10,000. It is a race for three-year-olds because they get in with a light weight,’’ Edmonds said.

‘‘He did beat Pierata in the summer and they all say Pierata is a future superstar. We know he will improve.’’