The ACT Brumbies say they can prove their doubters wrong on Saturday night, scrumhalf Joe Powell adamant they will thrive as underdogs to conquer Super Rugby's Mt Everest at Canberra Stadium.

The Brumbies will send one of the most inexperienced "spines" in the competition into battle against an all-star Canterbury Crusaders side that has lost just three games in 12 months. 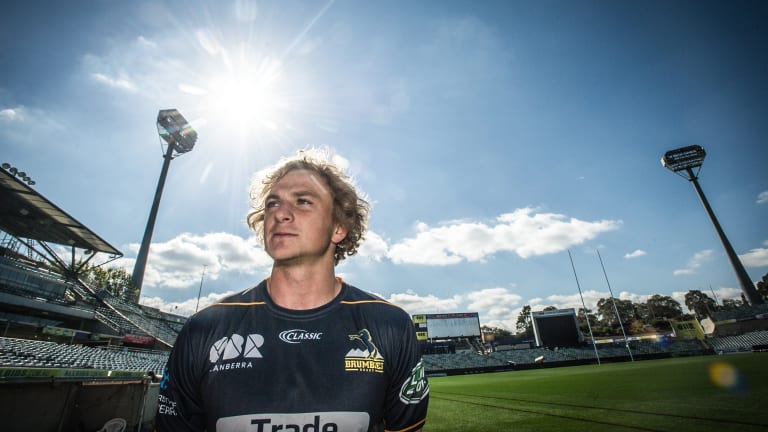 Joe Powell is hoping the young Brumbies can click against the Crusaders.

The Brumbies have the task of trying to end Australian rugby's 35-game losing streak in trans-Tasman contests and winning their first game against a New Zealand opponent since 2016.

The absence of experienced leaders David Pocock and Christian Lealiifano will make the challenge even tougher. But Powell says the Brumbies are unfazed at being written off by critics.

"I'm actually excited. And I'm pretty sure everyone is excited because we've already been written off," Powell said.

"Everyone is excited by the opportunity to prove people wrong and show that we can play the way we want to.

"That's the way I'm feeling. We haven't put a complete performance together yet this year and I think that's probably getting frustrating for a few of the guys.

"So we just want that next opportunity to play well. We spoke at the end of [the last training] session about playing with excitement and enjoyment. That's probably been missing for a couple of weeks, maybe we've been negative at times. But we want to be happy out there and enjoy it."

The Brumbies will be aiming to end a nine-year drought against the Crusaders when they send a rejigged and undermanned team into the rivalry contest.

Most Brumbies have never beaten a New Zealand side in their Super Rugby careers and Ben Alexander is the only player to have tasted success against the Crusaders.

Pocock has been ruled out with a calf injury, while Lealiifano will also miss the game as part of a planned rest period.

It leaves the Brumbies without two of their most experienced and influential players, leaving the team with young players in key positions.

Powell is the most experienced in the "spine" – hooker, scrumhalf, flyhalf and fullback – but even he has played just 34 games. The quartet of Powell, Folau Faingaa, Wharenui Hawera and Tom Banks average just 21 games each.

To put that in contact, the Crusaders boast seven players with 100 games or more of Super Rugby experience.

"We like it when blokes write us off," said Brumbies captain Sam Carter, who will be playing his 100th game.

"It creates that underdog [scenario], we like being in that position, it's what the Brumbies are built on. When the Brumbies started people came down here for a chance to prove themselves.

"That's going to be no different [against the Crusaders], we're going to be out there to prove ourselves again."\

The Brumbies went close to causing a boilover against the Crusaders in Christchurch last season, losing a 17-13 thriller despite not having Pocock or Lealiifano on the field.

But they are trying to implement a new style this season, which has so far been hit and miss in their three wins from eight games.

Powell has been in and out of the starting XV as coach Dan McKellar searches for a spark to ignite the back line.

The 24-year-old has made more passes this year than any player in Super Rugby, but didn't challenge the defensive line by running the ball last week.

"I enjoy my running game and I haven't had many opportunities this year, which has been frustrating," Powell said.

"I suppose we don't kick as much as other teams so you're getting to a lot of breakdowns. I've probably just got to look for the opportunities a bit more.