Home » Sport » Which Sloane Stephens Will Show Up at the French Open?

Which Sloane Stephens Will Show Up at the French Open?

Sloane Stephens’s 2019 season officially began in January. But in her mind, she is starting fresh this month, and there is certainly no shortage of symbolism as Stephens returns to the red clay of Roland Garros, where she was a finalist last year.

She and her longtime boyfriend, Jozy Altidore, announced their engagement on April 29.

Three days later, she announced that she had hired the veteran coach Sven Groeneveld to fill the void left by her split with Kamau Murray.

“I needed some stability, and I needed structure,” Stephens said. “And now I feel I have someone on my team who really gets it and gets what I’m going through.”

The early results have been promising, if mixed. After going 8-7 on tour through April, Stephens made a strong run in her first tournament with Groeneveld — to the semifinals of the Madrid Open. She then lost in her opening round at the Italian Open in three sets to the eventual runner-up, Johanna Konta.

“For me, my season is starting now,” Stephens said in an interview in Madrid. “I kind of had a rocky first four months of the year, and I’m just kind of getting it going now.”

[What’s new at the French Open? Read about the new greenhouse court and other renovations.]

Stephens, one of the game’s great and most unpredictable talents, has experienced extreme momentum swings. In the late summer of 2017, she came back from a long injury layoff to win the United States Open. She then lost eight straight singles matches before emerging from her funk last spring, winning the Miami Open and reaching the final of the French Open.

“She’s one of those players who can snap out of it at any moment,” said Paul Annacone, one of her numerous former coaches. “I wouldn’t be surprised at all if she’s playing for the title again in Paris.”

Stephens came close to winning it last year, taking an early lead against Simona Halep before losing eight of the final nine games and the match, 3-6, 6-4, 6-1.

“It just wasn’t my time,” Stephens said. “She was bound to win a Slam, and that was just how it was supposed to be. I can accept that fully.” 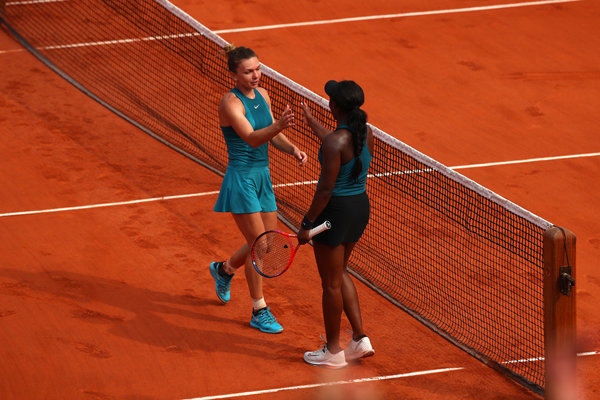 Stephens took this destiny-rules approach often during our interview. She remains an enigmatic figure to many in the game: clearly a potential No. 1 with her blend of defensive prowess and baseline power but passive to a fault on occasion.

She is dictating more often with her huge, versatile forehand, but still not enough in the view of many experts.

Then again, Stephens’s default mode has been good enough to win one major, to reach the final of another and to claim the runner-up’s spot at last year’s WTA Finals in Singapore, often considered the fifth most important annual event on tour.

Ranked No. 3 last July, she is now No. 7, at a time when no woman is dominating week to week but many are emboldened.

“It is an open space, so any little extra edge can help a lot,” she said. “So that’s what I want to try to achieve with Sven.”

Stephens attributes some of her wide-ranging results in the past two years to adjusting psychologically to the demands generated by her surprise U.S. Open victory.

“I was living such a normal life,” she said. “And then I decided — well, I didn’t decide — but it just so happened that I played a month of insane tennis, and I was like: ‘I’m not ready for this, like, I don’t want to be ready for this.’ I woke up the day after the final, and I was like, ‘Damn, what did I just do?’”

She also acknowledged playing through injuries and malaise in order to avoid paying a price: the big fines for not participating in top tour events.

“If I’m not prepared to play a tournament, I probably shouldn’t play,” she said.

Groeneveld, a 53-year-old Dutchman, has coached a long list of champions, including Mary Pierce, Michael Stich, Ana Ivanovic, Caroline Wozniacki and Maria Sharapova, with whom he split on good terms in March 2018.

Groeneveld declined to speak publicly about Sharapova during his four years as her coach and is taking the same approach with Stephens.

“I am focusing on one thing only,” he said, “and that is building my coaching relationship with Sloane.”

Neither Stephens nor Murray has fully explained their split. Murray helped Stephens come back from injury and win the U.S. Open. They took a break near the end of last season, and that break eventually became permanent.

“We had some great results, but sometimes you just get to a point where it’s time to let go and look for other things,” Stephens said, declining to elaborate.

Stephens has worked with many a mentor — including Nick Saviano, Roger Smith, David Nainkin, Thomas Hogstedt and Annacone — but is sensitive to the suggestion that she is prone to hiring and firing.

“There are different circumstances,” she said. “Sometimes I do need a new voice, or we’re not connecting, or it’s: ‘I don’t want you to get a divorce. Go home and be with your family.’”

But she does concede that her coaching timeline makes for a long paragraph on Wikipedia. “You just look at it, and it’s like, ‘Damn, there are 12 people on here!’” she said, laughing. “But everyone I ever worked with, I still talk to and still communicate with. I love them.”

Stephens can be vivacious, funny and profane in an interview. She is also a “Game of Thrones” aficionado whose social-media accounts could be in danger of going dark now that the show has ended.

But she is more often guarded, a consequence of early-career interviews in which she felt she shared too much. She said her challenges early in life were also part of the reason for holding back her emotions: Her stepfather, Sheldon Farrell, died of cancer in 2007, and her biological father, the former N.F.L. running back John Stephens, died in a car crash in 2009 shortly after they had re-established a relationship.

“People will be like, ‘You’re not trying,’” she said. “But it’s not that. It’s more I’m not in the place where things are going great, and I don’t show it or don’t say, ‘I’m really unhappy, guys.’ I think me being kind of neutral all the time has kind of worked against me, but I feel I’m that way because when I was younger I had a lot of ups and downs, and emotionally it was hard to deal with a lot of trauma. So I kind of just turn off at a certain point.”

At the moment, however, she is on a high. She and Altidore, a 29-year-old forward with the United States men’s national soccer team and Toronto F.C. of Major League Soccer, have known each other since childhood.

He has tremendous speed. So does Stephens. Watch out for any future offspring.

“You should invest in them now,” Stephens joked.

She said that she and Altidore had yet to set a date for the wedding and that planning could be a challenge as they juggle two professional sports.

“I don’t know who is making my dress; I literally have no information,” Stephens said. “I just kind of need a moment to soak it all in and say: “It’s O.K. It’s happening.”

She added: “We both are very, very busy, so naturally the first thing that is coming to both of our minds is not like, ‘Do you have any details on the wedding?’ He’s more like, ‘How do you feel after your match?’”

The answer for now, after a demoralizing start to 2019, is better. What comes next in Paris or at Wimbledon? Not even Stephens knows, but what’s clear is the potential for more tennis transcendence.

“With Serena not full time anymore, to me Sloane is the most talented woman on the tour,” Annacone said. “I think she’s just a freak of a talent.”