The World Anti-Doping Agency's executive committee will vote on Monday (local time) at its meeting in Lausanne, Switzerland, on a recommendation to bar Russia from any formal involvement with the 2020 Summer Games in Tokyo and the 2022 Winter Olympics in Beijing.

On November 22, WADA's compliance review committee recommended that the executive committee find the Russian Anti-Doping Agency in violation of the World Anti-Doping Code because of "an extremely serious case of noncompliance with the requirement to provide an authentic copy of the Moscow data, with several aggravating features".

This is what to know ahead of their decision.

What is at stake?

The committee is considering a series of recommendations, including: a ban on Russia participating in international competition, which also includes Youth Olympic Games, Paralympics, world championships and other major sporting events subject to the WADA code; Russian officials be barred from sitting on boards and committees related to international sports governance; Russia be disqualified from hosting any major sporting event or even applying for hosting opportunities; and the Russian flag won't be allowed to fly at any major event.

Who is making the decision?

The 12-member executive committee is considered WADA's most important policymaking body and is headed by Craig Reedie, a former badminton player from the United Kingdom and longtime sports administrator. The other members come from 11 countries and have a wide range of athletic and political backgrounds. None of the 12 is from Russia or the United States. 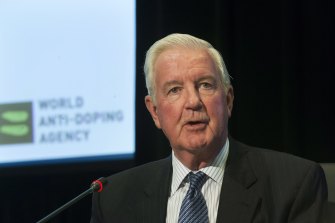 Craig Reedie is one of the committee members who will be making the decision.Credit:AP

Are they certain to accept the compliance review committee's recommendations?

Nothing is certain, and both WADA and the International Olympic Committee have faced criticism for not coming down harder on Russia for its years-long doping scheme that has tainted many of the world's biggest sporting events and seen Russia stripped of more than 30 Olympic medals since 2008.

If the CRC then reconsiders the matter and forwards a new set of recommendations, the executive committee could then adopt those proposals or "take its own decision on the matter," according to WADA.

How would Russia's presence in Tokyo be affected?

If the executive committee accepts the recommendations, Russia will have no formal presence. Its flag won't fly; its anthem won't play. No officials from the Russian Olympic Committee or any of its sport governing bodies can attend the Olympics or any other major international competitions for the next four years. This includes government officials such as Russian President Vladimir Putin. 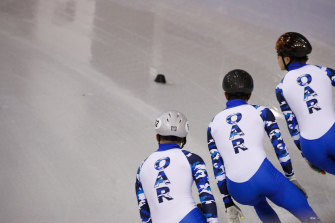 “Olympic Athletes from Russia” competed at the Pyeongchang Winter Games.Credit:AP

But Russian athletes will still compete, as long as they haven't been implicated in doping. Russia faced similar restrictions during the 2018 Winter Games in Pyeongchang, where 168 Russian athletes competed as "Olympic Athletes from Russia". According to WADA, Russians can compete if "they are able to demonstrate that they are not implicated in any way by the noncompliance (i.e. they are not mentioned in incriminating circumstances in the McLaren reports, there are no positive findings reported for them in the database, and no data relating to their samples has been manipulated)."

Would Russia have any recourse?

If the executive committee votes to give the Russian Anti-Doping Agency formal notice of its noncompliance with the World Anti-Doping Code, the Russian agency will have 21 days to respond. If it disagrees with the WADA ruling, it can protest the matter to the Court of Arbitration for Sport, which would have final say.

The IOC must honor the executive committee's decision. "IOC has in the Olympic Charter accepted the World Anti-Doping Code, and if there is a decision being issued … it is mandatory," IOC President Thomas Bach said at a news conference last week in Lausanne.

Yes, on multiple occasions. Its track and field athletes were barred from the Rio Games in 2016, for example, and it had no formal presence at the Pyeongchang Winter Olympics two years ago. The Russian Anti-Doping Agency was reinstated in September 2018 and appeared to be on-track for full inclusion on the international stage. But as a condition of reinstatement, RUSADA was required to share some of its testing data from its Moscow laboratory by December 31, 2018, which triggered a new round of infractions and likely punishment.

What exactly did they do wrong?

RUSADA drew the ire of many this past December, when it missed that deadline to turn over the data. The Russians were granted a reprieve and finally shared the information in January. But when investigators compared what they'd been given by the Russians with data that was shared in 2017 by a whistleblower, they noticed several discrepancies.

According to WADA, "hundreds of presumptive adverse analytical findings" supplied by the whistleblower had been removed, and "the related underlying raw data and PDF files have been deleted or altered". Making matters worse, the investigators said this data manipulation was done after RUSADA had been reinstated and informed it needed to share the information with WADA.

"These activities were concealed by backdating of computer systems and data files in an attempt to make it appear that the Moscow data had been in their current state since 2015," WADA said.

Investigators also say the Russians "planted fabricated evidence" in attempt to implicate the whistleblower Grigory Rodchenkov, the former head of the Moscow lab, in a purported scheme that sought to extort money from athletes.

Will everyone be satisfied with the upcoming decision?

Not likely. Russians, for starters, feel they've been unfairly targeted. And many in the anti-doping community feel WADA and the IOC have been too soft on Russia. Travis Tygart, the chief executive of the US Anti-Doping Agency, said before the decision that he felt no Russian athletes should be allowed to compete in Tokyo.

What does this mean moving forward?

If the executive committee accepts the recommendations, Russia likely would be eligible to return to international competition in early 2024.

The CRC did not recommend any interim monitoring of Russia's anti-doping operation, saying "that RUSADA's work is effective in contributing to the fight against doping in Russian sport, and that it is working productively in cooperation with other anti-doping organisations, including in investigations within Russia."

It did say that any reinstatement is conditioned on WADA remaining satisfied "that RUSADA's independence is being respected and there is no improper outside interference with its operations."

How will this impact competition in Tokyo?

It's not known how many Russian athletes might be competing, but Russia is traditionally a regular visitor to the medals podium. At the 2016 Summer Games, the country's track and field athletes were barred from competing because of doping concerns, but they still sent 282 athletes to Rio de Janeiro and brought home 56 medals, the fourth-most of any nation. At the 2012 London Games, the Russian contingent included 436 athletes, the third-largest team, and won 68 medals.

Russia is usually most competitive in track and field, boxing, fencing, judo, gymnastics and wrestling.