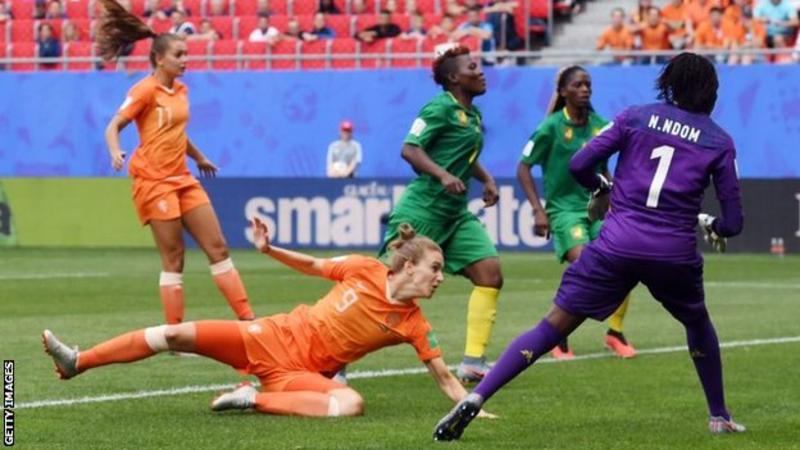 The Netherlands confirmed their place in the World Cup knockout stage with a game to spare as they beat Cameroon at the Stade du Hainaut in Valenciennes.

Roared on by more than 10,000 fans, the Dutch made amends swiftly after half-time as Cameroon’s failure to clear a free-kick allowed Arsenal midfielder Dominique Bloodworth to convert.

Miedema then ensured the victory, and qualification, as she cut inside from the left before unleashing a powerful shot beyond goalkeeper Annette Ngo Ndom with five minutes remaining.

The Netherlands top Group E after winning back-to back World Cup matches for the first time, before Canada’s match against New Zealand in Grenoble at 20:00 BST.

The Netherlands, ranked eighth in the world, needed an injury-time winner to edge their group opener against New Zealand and lacked a cutting edge despite dominating the play before Miedema’s breakthrough.

That goal had left WSL top scorer Miedema level with former striker Melis, who retired from international football in 2016 aged 29.

In a first meeting between the sides, Cameroon offered stern resistance to frequent sparks of pace and trickery from Dutch wingers Lieke Martens and van de Sanden, and should have been ahead when Onguene dragged a close-range shot wide after 20 minutes.

Alain Djeumfa’s Cameroon side, beaten by Canada in their opening match, must now hope to finish as one of the four best third-placed sides if they are to reach the knockout stages.

Miedema leads the way – the stats

The Netherlands complete their group-stage campaign against Canada on Thursday (17:00 BST) in what could be a battle for Group E’s top-spot in Reims, while Cameroon face New Zealand in Montpellier at the same time.

Desiree van Lunteren (Netherlands) wins a free kick in the defensive half.

Attempt missed. Sherida Spitse (Netherlands) right footed shot from outside the box is too high. Assisted by Lieke Martens.

Attempt blocked. Henriette Akaba (Cameroon) left footed shot from the centre of the box is blocked. Assisted by Gabrielle Onguene.

Henriette Akaba (Cameroon) wins a free kick in the defensive half.

Jackie Groenen (Netherlands) wins a free kick in the defensive half.

Attempt saved. Vivianne Miedema (Netherlands) right footed shot from outside the box is saved in the centre of the goal.

Lieke Martens (Netherlands) wins a free kick in the attacking half.

Attempt missed. Raissa Feudjio (Cameroon) left footed shot from outside the box is too high. Assisted by Ajara Nchout.

Daniëlle van de Donk (Netherlands) wins a free kick in the defensive half.

Attempt missed. Gaelle Enganamouit (Cameroon) right footed shot from the right side of the box is close, but misses to the right. Assisted by Ajara Nchout.

Attempt missed. Vivianne Miedema (Netherlands) right footed shot from the centre of the box is just a bit too high. Assisted by Jackie Groenen with a cross.

Delay over. They are ready to continue.

Delay in match because of an injury Gabrielle Onguene (Cameroon).