Like nearly all of the 13 human feet that had mysteriously washed up on Canadian shores before it, the 14th foot appeared, unexpectedly, on the banks of the Salish Sea in British Columbia.

This time, a man walking the beach on Gabriola Island discovered the appendage last Sunday afternoon, trapped in a mass of logs, according to the Royal Canadian Mounted Police. 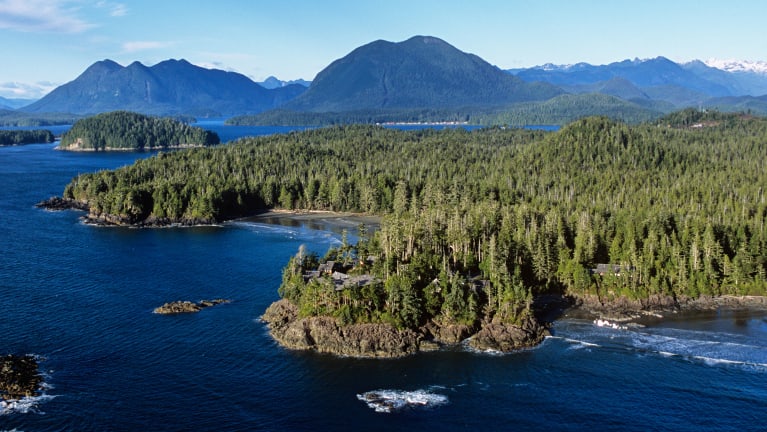 14 feet have washed up on Canada’s west coast in the last 11 years.

The law-enforcement agency described the foot as "disarticulated" – that is to say, disconnected from the human body to which it had belonged. It did not specify if it was a left foot or a right foot. Curiously, Foot No. 14 was clad in a hiking boot; all but one of the others had been wearing athletic sneakers.

So continues the mystery of the human feet floating ashore in the Pacific Northwest, a phenomenon that has captivated residents, scientists and area law enforcement since 2007. In August of that year, not one but two disembodied human feet, both right ones, were found on islands in the Salish Sea, a network of coastal waterways between Vancouver Island and Canada's westernmost province.

"Two being found in such a short period of time is quite suspicious," Corporal Garry Cox of the Oceanside Royal Canadian Mounted Police told the Vancouver Sun in August 2007. "Finding one foot is like a million to one odds, but to find two is crazy."

Over the next year, four more feet appeared in the region's inlets and beaches. Investigators logged each shoe's model and size ("Men's blue-and-white Nike running shoe, size 11", "Woman's blue and white New Balance running shoe, size 7") and released photos of them to the public, in the hopes they would strike a chord of recognition for friends or family members of the deceased. 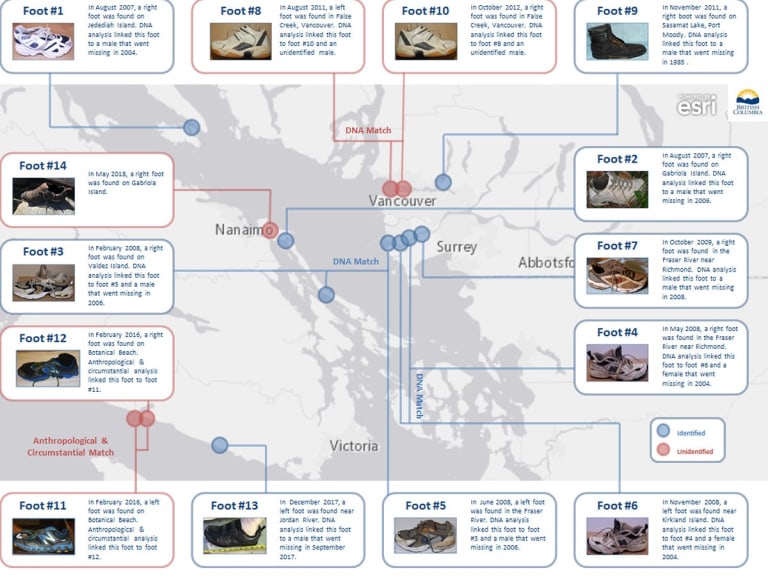 The 14th foot washed up on Sunday.

At the time, officials emphasised none of the human remains had shown signs of trauma – but given the macabre nature of the findings, speculation ran rampant anyhow. Was it a murderer's cruel calling card? A drug cartel at work? Why were all of the feet found wearing sneakers?

"We also have to consider that this could be a serial killer, somebody who right now is underneath the radar," lawyer and crime author Michael Slade said then, according to the network. "That has to be on the table."

With time and DNA testing, officials were able to match the wayward feet with people who had been reported missing. In the process, less sensational but no less tragic stories emerged.

One of the first feet discovered was eventually linked to a missing Vancouver man who had suffered from depression and emotional distress, the Seattle Times reported in 2008.

"It's not happy news, but it could bring a sense of closure to some extent," RCMP spokesman Pierre Lemaitre said then, according to the newspaper.

"A family member saw [a picture of] one of the shoes and thought, 'Wait a second.' "

On a few occasions, corresponding left and right feet have reappeared within a few months of each other. Two of the feet that washed ashore in 2008 – one in February and the other in mid-June – were found on separate islands in British Columbia, clad in matching size 11 Nike running shoes.

In 2011, the British Columbia Coroners Service used DNA analysis to identify those two feet as having belonged to a 21-year-old Surrey resident reported missing in 2004.

As with the previous cases, authorities said they had ruled out foul play. Instead, officials linked the death of the Surrey man to "misadventure and suicide", the Globe and Mail reported.

"Autopsies indicated the feet had not been mechanically removed but rather separated through the natural processes that occur in a marine environment," the coroner's office said then.

In one remarkable case, a right boot found in Port Moody in 2011 was linked to a man who was reported missing in 1985, according to the coroner's office.

Over the past decade or so, 14 feet in all have washed ashore in British Columbia, of which eight have been identified as belonging to six people. The discoveries are now frequent enough that British Columbia Coroners Service even put together a map charting where each of the feet had been found. (Some other feet have appeared on American shores further south, in Washington state.)

Officials say there's a reasonable explanation for why so many of the feet have been found in sneakers: namely, that the materials used to make modern-day running shoes allow the feet to remain buoyant after they become separated from the rest of the body in the sea.

"It really didn't come up until we had running shoes that floated so well," coroner Barb McLintock told The Canadian Press news service in 2016. "Before, they just stayed down there at the bottom of the ocean."

McLintock said investigations on each shoe took time, but could nearly all be chalked up to "an alternate, very reasonable explanation".

"We pretty well think we know what happened in every case," McLintock told the news service.

"A lot of this is simply the quelling of the public imagination, to say 'No, this is unfortunate and they're all very sad cases.' "