A QUARTER of businesses have ALREADY shut down because of coronavirus

A QUARTER of businesses have ALREADY shut down because of coronavirus: Thousands of firms reveal they have closed since lockdown and almost four in 10 of those still open say their sales have been ‘substantially’ damaged by economic chaos

A quarter of UK businesses have temporarily ceased trading because of the dire economic impact of coronavirus, shock new figures reveal today.

Companies which have continued to operate have also furloughed more than a fifth (21 per cent) of their workforce, according to the Office for National Statistics (ONS).

Almost four in 10 (38 per cent) companies say their sales have ‘substantially’ been hit by the nationwide lockdown in place for the past three weeks.

With ministers expected to rubber-stamp a three-week extension of the shutdown, with has turned most high streets into ghost towns, the numbers are likely to place more pressure on ministers to explain their exit strategy.

Economist have revealed that UK GDP could fall by as much as 35 per cent, with more than two million people losing their jobs. 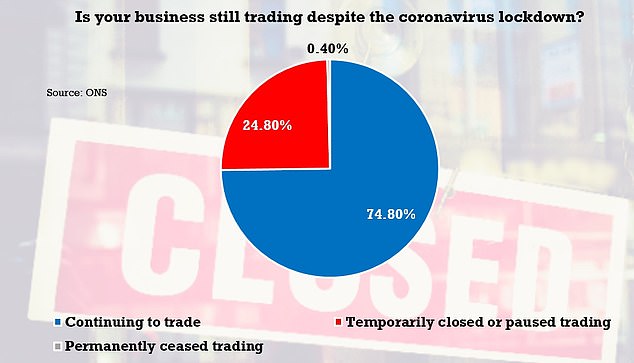 A quarter of UK businesses have temporarily ceased trading because of the dire economic impact of coronavirus, shock new figures reveal today 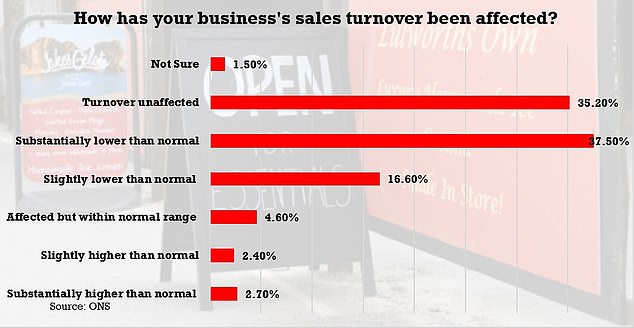 Around 41 per cent of businesses which continued to trade said they were ‘reducing staff levels in the short term’ in response to the virus.

The survey, which is the first by the ONS to look at the first two weeks of the lockdown, revealed that almost 40 per cent of adults had work-related worries due to the pandemic.

Of those with work-related concerns, 36 per of respondents said their main concern was the availability of work and decreased hours.

Lib Dem Mp Layla Moran said that the Treasury’s Coronavirus Job Retention Scheme should be extended beyond May, to prevent a fresh wave of redundancies at the end of this month.

‘This scheme has proved a vital lifeline to businesses and employees,’ she said.

‘Given the scale of the crisis, the Government must extend the scheme for a further three months, with a commitment to keep it going for as long as it’s needed.   ‘

Iain Bell, deputy national statistician for public policy at the ONS, said: ‘It’s never been more important, or more appreciated, that businesses and individuals give their time to tell us about their experiences.

‘The information from these surveys is providing vital insight to the UK Government into how people are responding to, and feeling about, the current situation, including their anxieties and measures that are helping them to cope.’

It said this is driven by large rises in the price of pet food, up 8.4 per cent, and rice, which rose by 5.8 per cent.

However, some products declined in price, such as pasta sauce, which declined by 4.5 per cent, and baby food, which fell by 4.1 per cent.