The world’s largest rainforest has seen a surge in wildfires this year. According to Brazil’s space research centre, there have been more than 75,000 fires this year alone – an 85 percent hike from the same period last year. The wildfires which have prompted an international response have concerned and distressed millions of people. But is it possible that rainfall in the region could put out the raging blazes?

The rainforest represents more than half of the planet’s remaining rainforests and is comprised of the largest and most diverse tract of tropical rainforest in the world.

The Amazon forest produces about 20 percent of the world’s oxygen and is known as “the planet’s lungs”. 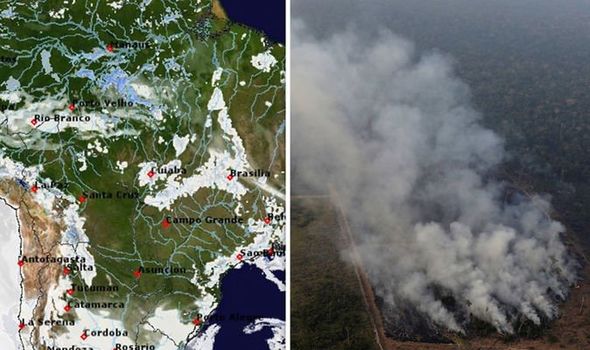 The Amazon basin is full of rich and lush greenery, because of the abundance of rain it receives each year – an estimate 4 metres on average each year. This equates to 200 days of rain per year.

However, given the sheer size of the Amazon, its climate varies depending on the area.

Typically it rains far less in central Amazonia than in the Peruvian Amazon or at the eastern Amazon of Brazil.

The Amazon is known for having two seasons: the flooded and the dry season. 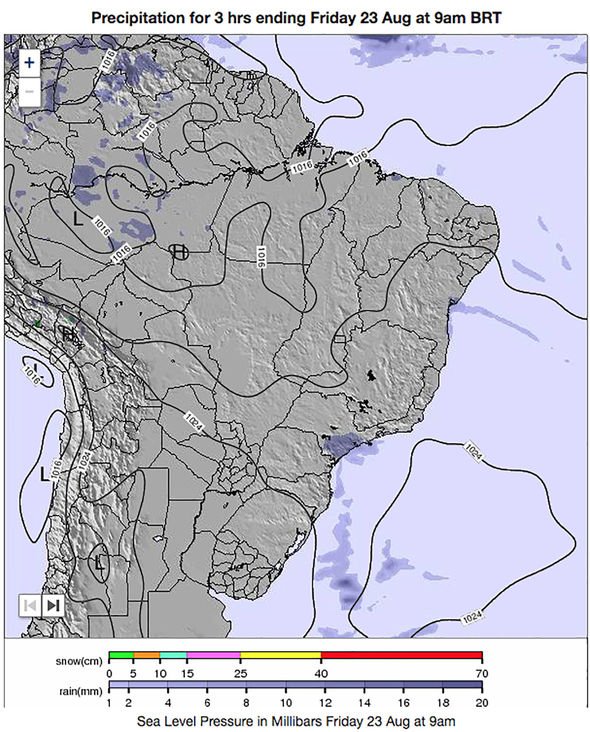 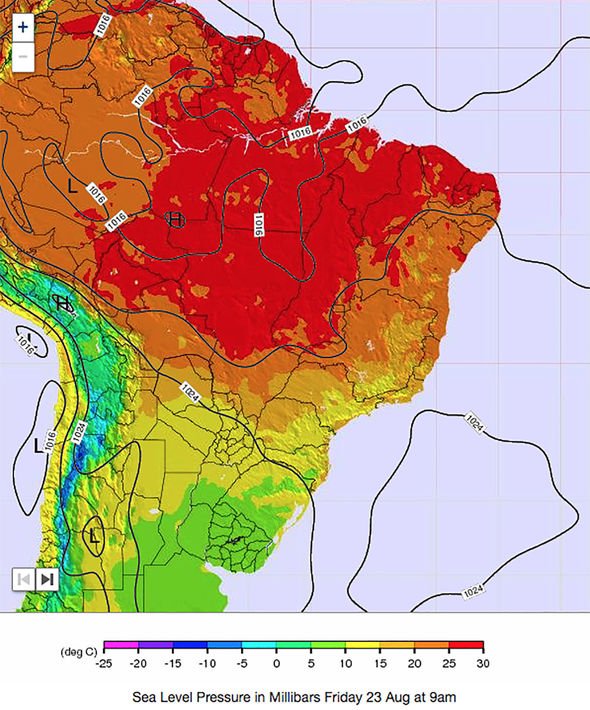 The dry season in Amazonia coincides with winter in the Southern hemisphere and usually lasts from July to November.

Although it is currently the dry season, some weather maps appear to show it is raining in some areas of the Amazon right now.

According to the World Wide Fund for Nature (WWF), climate change and deforestation have had a drying effect on trees making them highly susceptible to wildfires. 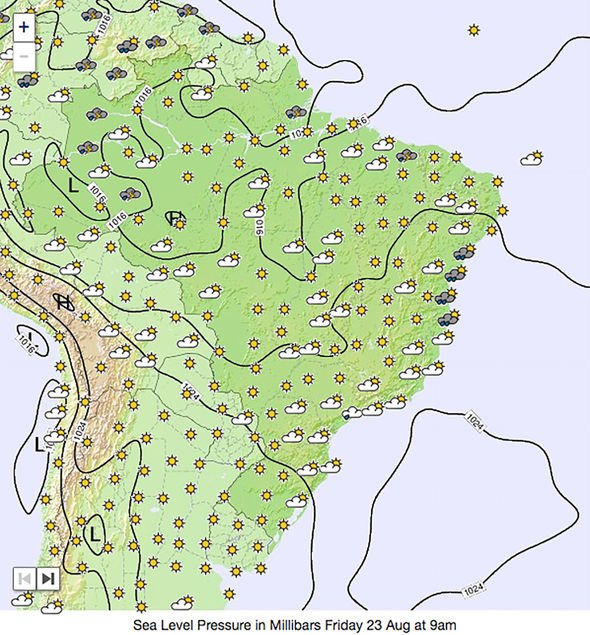 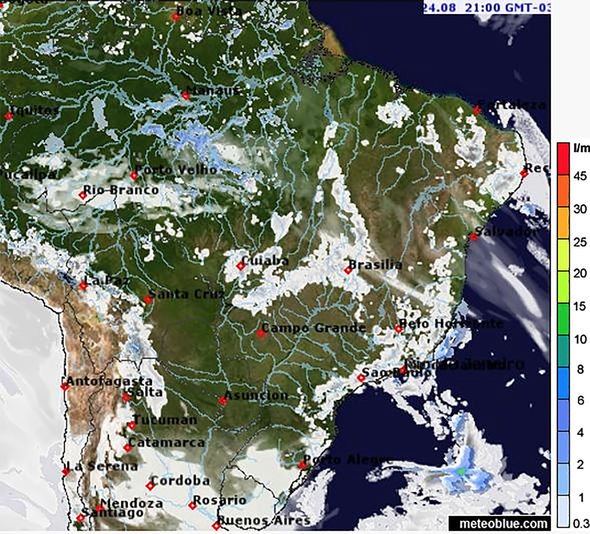 According to environmentalists and a researcher at Brazil’s National Institute for Space Research (INPE), one of the main reasons the Amazon has seen record fires this year, is due to deforestation.

INPE researcher Alberto Setzer said 99 percent of the fires result from human actions “either on purpose or by accident”.

In a number of weather maps, areas above the Amazon appear to be experiencing rainfall.

On Thursday Brazil’s President Jair Bolsonaro said his government lacks the resources to fight wildfires in the Amazon. 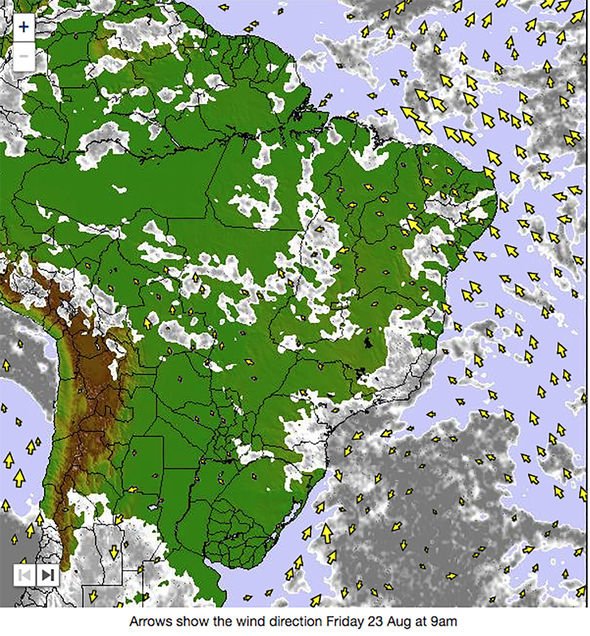 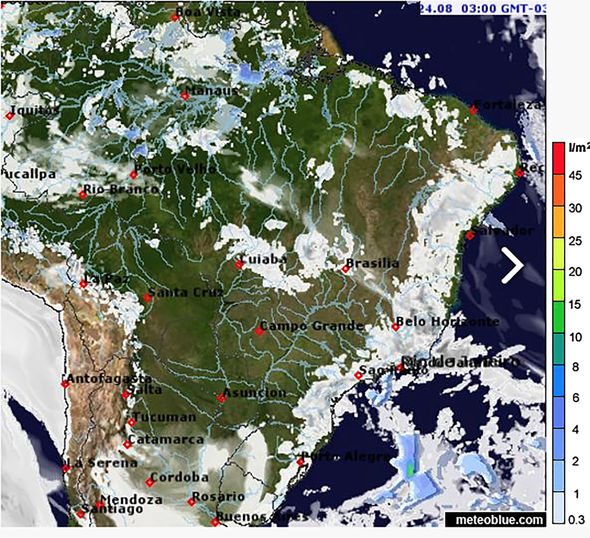 He told reporters Brazil was in “chaos” and that his government could only send “40 men” to fight the prolific fires.

He said: “The Ministry of Justice can send 40 men to combat the fight, but do you understand that? Forty men. There are not enough resources. We are in chaos.”

Given how prolific the fires are across the Amazon, many around the world have shared their hopes that the rainfall will help with efforts to extinguish the flames and save more of the rainforest.