Home » World News » Amid pomp and ceremony, Macron to persuade Trump to keep US in Syria

Amid pomp and ceremony, Macron to persuade Trump to keep US in Syria

Washington: Emmanuel Macron will on Wednesday urge Donald Trump to keep the United States engaged in Syria for the long run as the pair meet in the White House.

The French President was expected to warn that new terrorist threats could emerge if the US disengaged from the country as it remains locked in civil war. 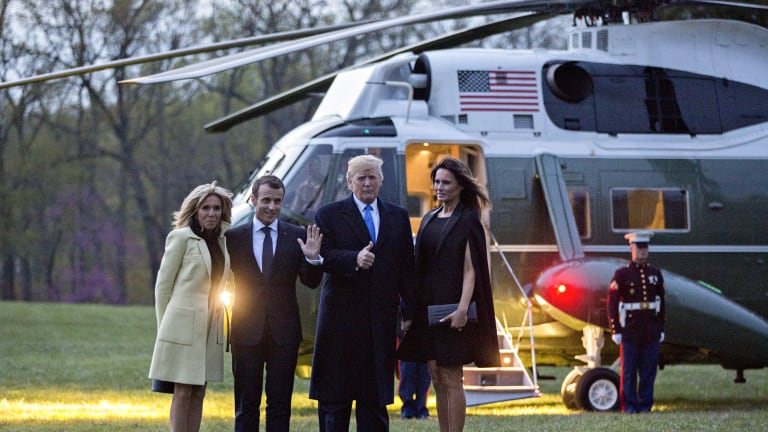 The Macrons and The Trumps arrive for dinner at Mount Vernon on Monday.

The White House has confirmed that a "way ahead in Syria" would be discussed in what officials predicted would be a "full and free airing of points of view" with Macron.

America's Syrian policy is up in the air as Trump balances his instinctive opposition to foreign intervention with a determination to police a "red line" over chemical weapons use.

Trump said last month that American troops would withdraw from Syria "very soon", only to be convinced by advisers to stay for the time being to defeat the last remaining Islamic State fighters. Just weeks later, the US President sanctioned air strikes on Syrian regime facilities alongside Britain and France to punish Syrian President Bashar al-Assad for a chemical weapons attack.

Macron, who arrived in Washington on Monday for a three-day state visit, Trump's first as a host, was said to have played a central role in convincing Trump to approve the strikes.

Macron also used a Fox News interview on Sunday to declare that pulling out of Syria would "leave the floor to the Iranian regime" and Assad, adding: "They will fuel the new terrorists." 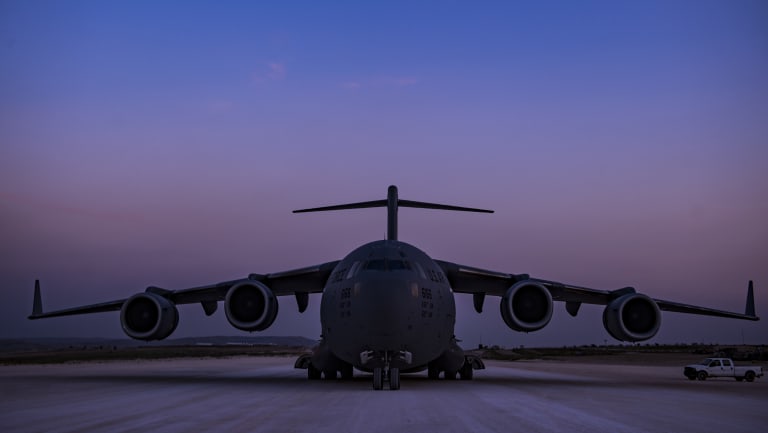 A C-17 Globemaster III, assigned to combat airlift operations for US and coalition forces in Iraq and Syria.

Trump has repeatedly criticised his country's involvement in the Middle East, saying that America has got "nothing" from the trillions of pounds spent in the region in the last few decades.

A decision over future Syrian engagement has become more pressing amid Russian media reports that the Kremlin is considering further arming Assad's forces.

The Kommersant newspaper quoted diplomatic and military sources as saying that Russia was planning to give S-300 surface-to-air missiles to the Syrian government in the "near future".

The move would anger Israel, which helped quash a similar move in 2013, and increase volatility in the region.

Russian Foreign Minister Sergei Lavrov on Monday said that no final decision had been taken.

Macron was given a red-carpet welcome as he arrived with his wife Brigitte, becoming the first world leader to embark on a state visit to the US under Trump. 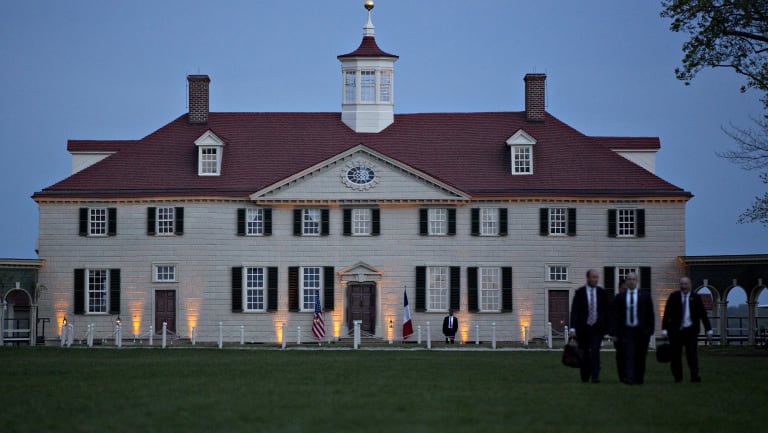 The Mansion at the Mount Vernon estate of first American president George Washington.

The two leaders opened the visit with an anything-but-ordinary double date with their wives at Mount Vernon, the home of George Washington, America's first president.

Macron, who calls Trump often, has emerged as something of a "Trump whisperer" at a time when the American president's relationships with other European leaders are more strained.

He will be given a "review of the troops" with 500 US soldiers in attendance, mirroring a military march that Trump attended during his Paris visit and the two men were due to have a one-on-one meeting in the Oval Office on Tuesday. 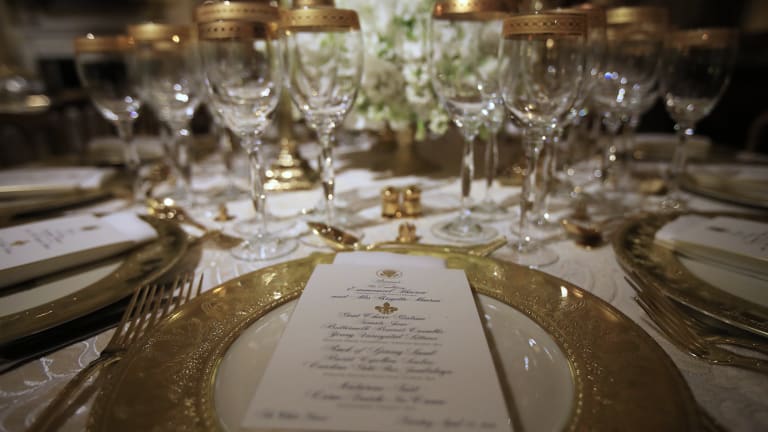 The State Dining Room at the White House is set for the first state dinner hosted by President Donald Trump.

As well as Syria, the two leaders are expected to discuss the Iran nuclear deal, US steel tariffs on the EU and the Paris climate change agreement.

Before Mount Vernon, the two couples helped plant a tree on the White House grounds together. The young oak is an environmentally friendly gift to the White House from Macron, and one that also bears historical significance. It sprouted at a World War I site in France, the Battle of Belleau Wood, that became part of US Marine Corps lore.

"This is a great honor and I think a very important state visit given the moment of our current environment," Macron said after his plane landed at a military base near Washington.

The state dinner, the highest social tribute a president bestows on an ally and partner, on Tuesday is due to break with tradition, however, as Trump has invited no congressional Democrats or journalists, according to a White House official.

Those expected to attend include Christine Lagarde, head of the International Monetary Fund and a former top French government official; outgoing House Speaker Paul Ryan; Defence Secretary Jim Mattis, and Mike Pompeo, Trump's choice to be the next secretary of state.