White spots on Tara Flannery's gums were diagnosed as a type of skin cancer.

The cancer, squamous cell carcinoma, was close to her jawbone, the North Kellyville primary school teacher was told in March 2018, and would likely spread if left much longer. 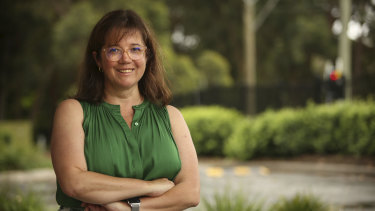 Tara Flannery had a piece of her fibula placed in her jaw when she was diagnosed with gum squamous cell carcinoma in 2018.Credit:James Alcock

Part of the bone needed to be removed and replaced with a piece of her fibula and titanium, with dental implants attached, to both remove the cancer and keep her ability to talk.

"If you hear that you've been diagnosed with cancer, your immediate thought is: well, get it out, get it out of my body," Ms Flannery said. "But I had to wait."

With pieces needing to arrive from Belgium and a complicated preparation process, it took five months for Ms Flannery to have her cancer removed in a 12-hour surgery.

Researchers hope new technology, to be unveiled on Tuesday at the Chris O'Brien Lifehouse in Camperdown, will allow implants to be created and received more quickly, with the process occurring entirely in Australia.

Maybe now other people won't have to go through that

The implants will initially be created using a national-first laser sintering 3D printer. Researchers hope they will later be able to use the printer to create scaffolds to grow implants from patients’ tissue and bone outside the body.

The $4 million printer is the centrepiece of the Lifehouse's new $6 million Sarcoma and Surgical Research Centre to be opened by federal Health Minister Greg Hunt on Tuesday as part of the federal government's Community Health and Hospitals Program.

Professor Jonathan Clark, director of head and neck research at the Lifehouse, said reconstructive surgery like Ms Flannery's is a very common pathway for people who are diagnosed with head or neck cancer.

"It's marvellous we can do it, but there are a lot of side effects to taking away someone's bone from their leg," he said, including "unpredictable levels" of pain between patients, deformity and issues when the person has ongoing cancer treatment or needs an X-ray.

"I'm constantly having to take out titanium plates in patients that have had radiotherapy because of the effects it has on the tissue after radiation."

Research being conducted by Professor Clark is examining whether printed polyether ether ketone (PEEK) implants created by the printer can be used in load-bearing situations, such as jaw replacements, eliminating the need for material from elsewhere in the body as well as the troublesome titanium.

Dr Natalka Suchowerska, the Lifehouse's director of physics research and education, says PEEK is more commonly being used in other scientific spaces, such as the aeronautical industry. As a result, the research is bringing together people from a number of disciplines, she says, hoping different implant methods will lead to quicker turnarounds for patients.

Even though she knows her titanium implant will present problems if her cancer returns, Ms Flannery considers herself lucky.

"I will have issues with my ankle and my leg for the rest of my life because I've got a big chunk of muscle and a bone missing in my leg to help build my mouth. But maybe now other people won't have to go through that," she said.

The research will begin animal trials in 2021.