‘Ban free refills of fizzy pop to cut child obesity’: All you can drink meal deals mean children are gorging on pop packed with sugar from just £2.90

Endless free refills of fizzy drinks should be banned from restaurants, campaigners say.

The availability of the deals means that children and teens can binge on refillable drinks packed with sugar – for as little as £2.90.

One medium-sized glass can contain double the recommended maximum sugar intake for youngsters aged seven to ten – 50g or 12.5 teaspoons.

Campaigners say the free refills or ‘bottomless’ drinks are causing a cocktail of medical issues, from tooth decay to Type 2 diabetes, and have called on the Government to ban the practice if businesses fail to act.

Many major restaurant chains popular with families offer the unlimited refills, including Harvester, Toby Carvery, Frankie & Benny’s, Nando’s, Pizza Hut, Five Guys and TGI Fridays. The deals involve paying a fixed price in return for a cup which can be refilled at a self-service ‘soda fountain’ machine.

The chains point out that the free refill offers are not on their children’s menus, but their availability puts parents under ‘pester power’ pressure to order them. Kawther Hashem, a nutritionist at the campaigning group Action on Sugar, said children consumed on average 40 per cent of their sugar intake through drinks

Last October, Pizza Hut and TGI Fridays vowed to stop selling refills of sugary drinks by March this year, although campaigners say these voluntary measures by a few chains do not do enough.

They point to the example of France, where the government recently banned bottomless soft drinks nationwide.

Frankie & Benny’s does not advertise refillables on children’s menus, but the Soil Association food charity has accused it of offering the drinks to children.

Likewise, Nando’s does not include the drinks in its children’s menu, but print the offer beneath the kids’ section.

Last night Rob Percival, who led a Soil Association investigation of the food and drink available in major chains, said: ‘Nando’s bottomless drink offer is directly below the children’s meal deal. It is implicit that it is available to children. We invited them to take a range of actions including making a simple statement to staff indicating that full-sugar versions are only available to adults and children shouldn’t be drinking them, but they declined.’

Kawther Hashem, a nutritionist at the campaigning group Action on Sugar, said children consumed on average 40 per cent of their sugar intake through drinks.

‘Even one glass is too much, but children will go and get more,’ she said. ‘Restaurants are promoting refillables as part of meal deals, encouraging families to buy them. You need to create a level playing field. A ban is probably the easiest way to do this.’

Nando’s said if parents decided to order a soft drink for their child it was ‘ultimately their choice’, while Frankie and Benny’s said it would only serve a refill if ordered by the parent. 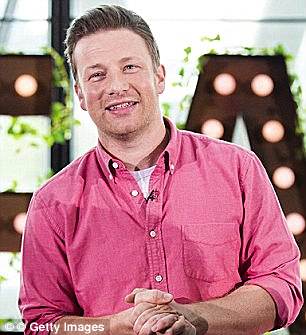 Pizza Hut said it had removed sugar-laden soft drinks from its refillable station and TGI Fridays said it would introduce organic squash, which has no artificial colours, sweeteners or flavours.

Five Guys did not respond to requests for comment.

* Jamie Oliver launched a foul-mouthed rant on the Government’s obesity strategy yesterday, which he branded ‘a piece of s***’.

The chef said the Prime Minister should order a ban on junk food adverts on transport, extend the sugar tax to milkshakes and outlaw junk food TV adverts before the 9pm watershed.