Brazil's Robinho has nine-year sentence for rape upheld in Italy

Brazil’s Robinho has nine-year sentence for rape upheld by Italian court: Player had bragged to friends ‘I don’t care, the woman was drunk and doesn’t even know what happened’

Brazilian footballer Robinho had a nine-year jail sentence for rape upheld by an Italian court on Thursday.

The 36-year-old had been appealing against a conviction he was handed in 2017 for attacking a 23-year-old Albanian woman in a Milan nightclub four years earlier.

It comes after a Brazilian newspaper revealed the contents of wiretapped phone conversations the footballer had with friends after the charges were first brought, including one in which he attempts to laugh off the accusations.

‘I’m laughing because I don’t care,’ Robinho could be heard saying. ‘The woman was completely drunk. She doesn’t even know what happened.’ 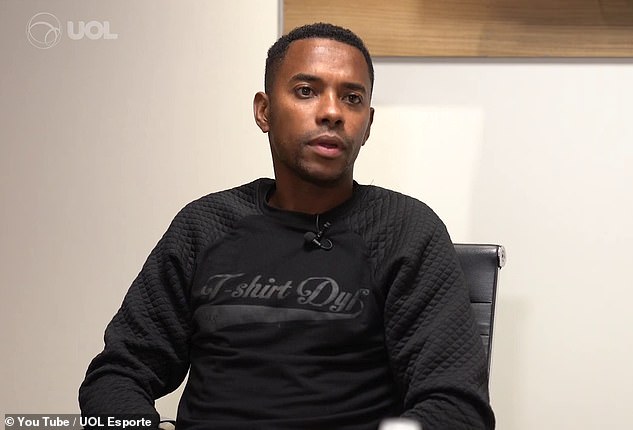 The charges date back to 2013, when Robinho was aged 28 and playing in Serie A for AC Milan.

On the night of January 22 the footballer and a group of at least six people, including his wife, had been drinking in the Sio Café nightclub in the city.

It was there that they met the Albanian woman, who was celebrating her brithday with some of her friends.

At some point during the evening Robinho walked his wife back home before rejoining his friends in the club, where they began drinking with the woman.

The woman says Robinho, who was due to celebrate his own brithday three days later, and his friends forced her to drink until she was nearly unconscious.

It was then that they took her into a private dressing room where Robinho and Falco sexually assaulted her while the other four men watched.

Robinho and Falco then ‘shared’ the woman with the other four men, Italian media reported at the time.

The sportsman was arrested and questioned over the allegations in 2014. He admitted having oral sex with the woman, but claimed it was consensual.

After questioning, police wiretapped Robinho’s phones and recorded conversations where he bragged about the attack with his friends. 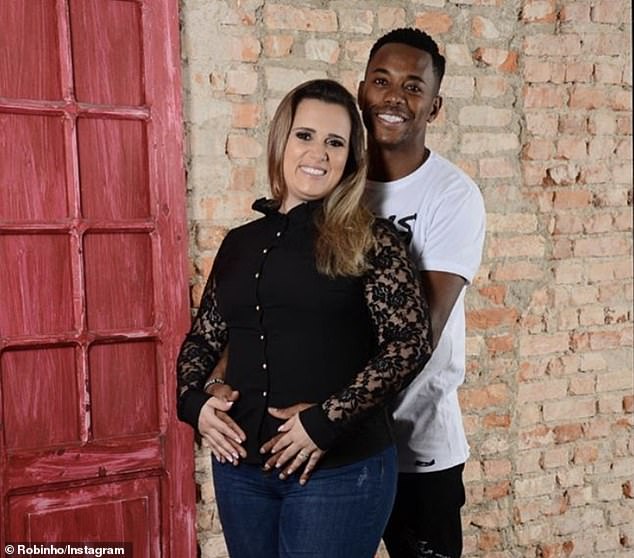 Robinho has repeatedly denied the charges, claiming the sex was consensual and that his only regret is being unfathful to wife Vivian (pictured together)

During the investigation, four of Robinho’s friends who were allegedly involved in the attack but have never been identified left the country for Brazil.

The same year Robinho left Italy to return to play for his boyhood club Santos, and Falco also left the country.

The pair were tried in absentia in November 2017 and found guilty of rape, with judges handing down a nine-year sentence.

Speaking during the sentencing hearing, the judges made it plain that ‘contempt’ for the victim shown in wiretapped phonecalls was an aggravating factor.

‘Particularly negative emphasis must be given to the tone and expressions used in commenting on the events, describing the girl with humiliating epithets and often in crude and contemptious terms,’ they said.

‘The defendents even laughed several times at the event, thus highlighting an absolute contempt for the condition of the victim, who was exposed to repeated humiliations, as well as acts of sexual violence through particularly invasive abuses.’

The pair have also been ordered to jointly pay the woman damages of $73,000. 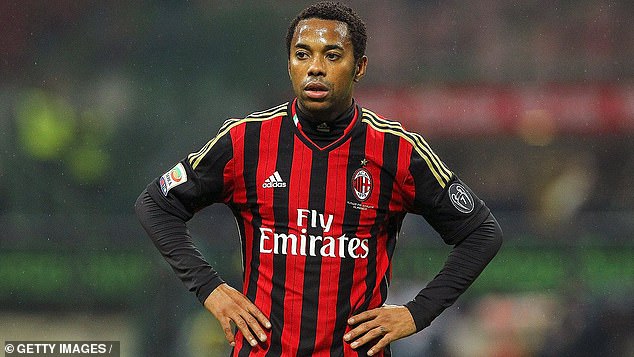 At the time of the attack the 28-year-old Robinho was playing in Serie A for AC Milan (pictured), but returned to Brazil before the charges were brought to court

Robinho has the right to again appeal the sentence within 90 days.

The footballer came through the academy at Brazilian club Santos where he was often compared to Pele as one of the top prospects they had produced.

He played at Real Madrid and Manchester City before a loan stint at Milan between 2013 and 2014, and was also capped for his country.

After the allegations against him emerged in Italy he went back to Brazil and also spent time playing in Turkey.

Earlier this year he transferred back to Santos where he was due to see out his career playing for minimum wage.

But Santos was forced to scrap the contract amid outcry over the rape case, with a major sponsor dropping its support of the club.

In an interview shortly after the club tore up his contract, Robinho continued to deny the rape charge – saying that his only regret about the night is that he was unfaithful to his wife, Vivian.

Asked about the pressure that had caused Santos to tear up his contract, he replied: ‘Unfortunately there is this feminist movement.’