Brewery blasted for sexism over claims its beer has ‘female hormones’

A brewery has been blasted for sexism after it said its beer was full of ‘female hormones’ that would lead to drinkers talking ‘crap’ and being unable to drive.

The company, based in Sussex, wrote a post online saying: ‘It as been discovered that our beer has female hormones in it, after five pints we talk crap and can’t drive.’

Social media users were left furious at the company and dozens took to Facebook to blast the brewers. 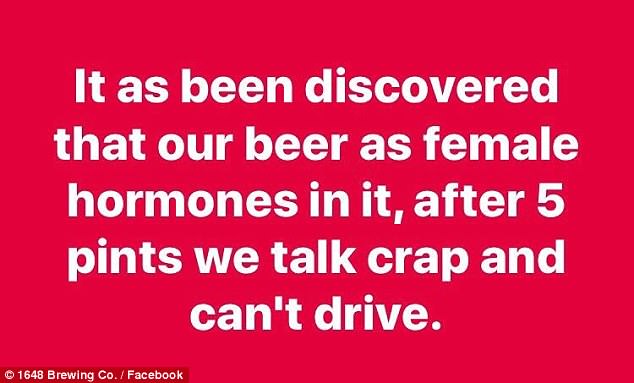 ‘I would not bother lining their pockets in exchange for sub-par beer. Unimaginative beer, backwards thinking staff and generally shoddy.’

Another user, James Warrington, commented: ‘Brewery with staff from the era of acceptable misogyny. Doesn’t work in this day and age, I wouldn’t put any money their way.

Melissa Cole, an award winning beer writer, condemned the 1648 Brewery Co on Twitter as she tweeted a screenshot of the brewery’s post with the caption: ‘It has been discovered on FB that @1648BreweryCo seems to have too much sexism in it, talks crap and can’t acknowledge this is 2018 not 1918.’

Ms Cole, from London, said: ‘Beer should be inclusive and this kind of Bernard Manning-esque humour should have been confined to that era by now.

‘It also makes jokes about drink driving, a subject it appals me to see being made light of by a brewery and I was astounded to see the local CAMRA branch sharing the post too.’ 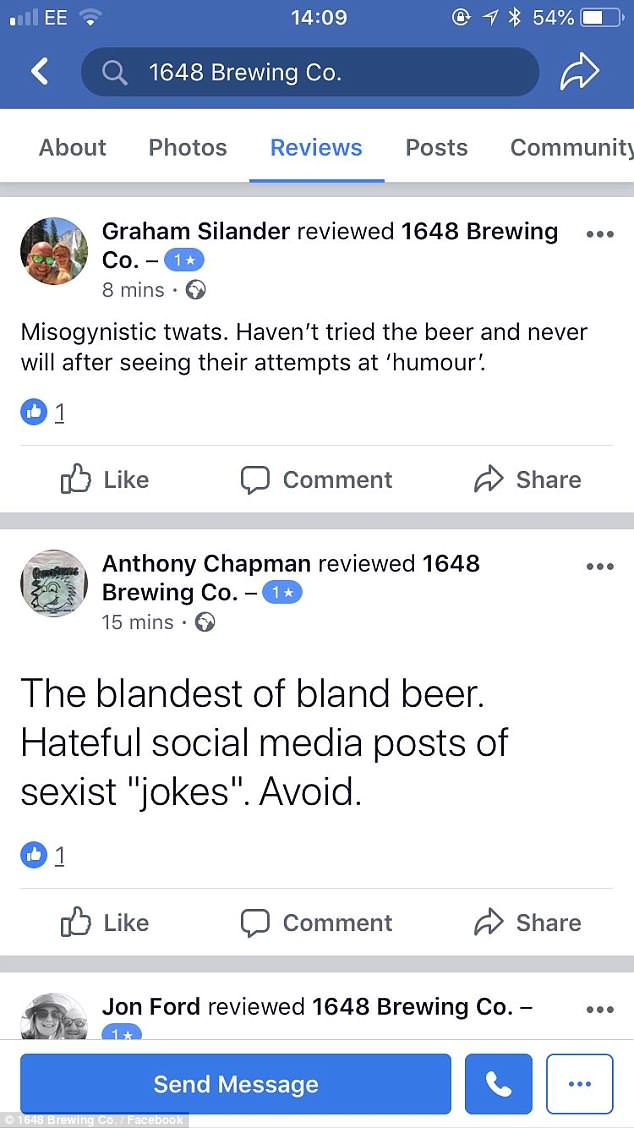 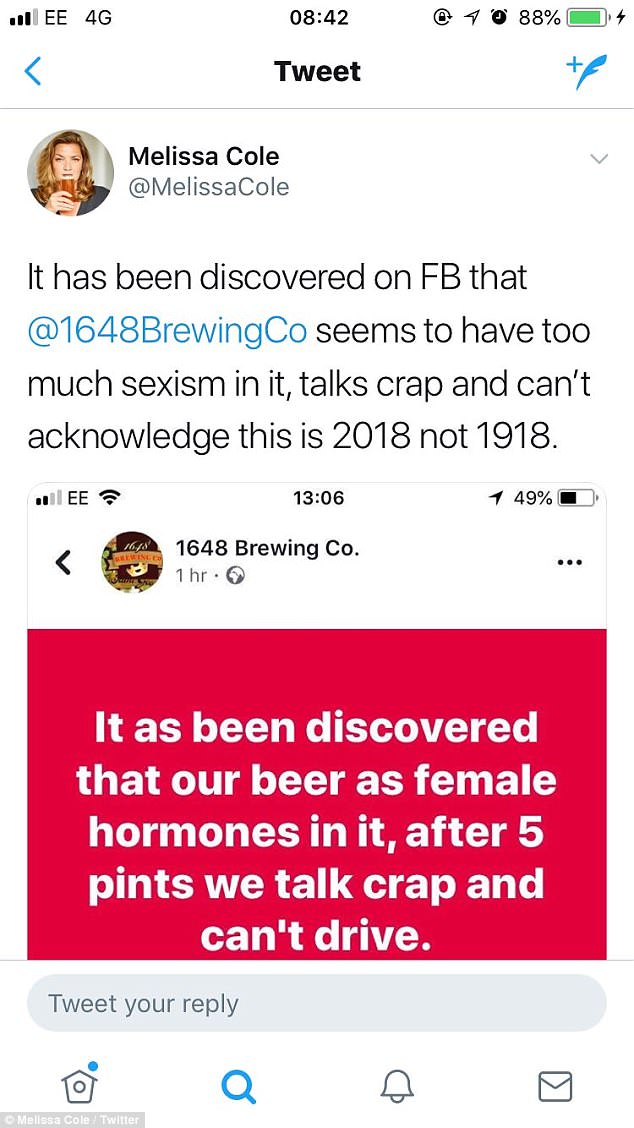 Sam Lovely said: ‘Someone needs to inform these dinosaurs that it’s 2018.’

However some supported the post and saw it as more of a misguided joke.

Peter Church wrote: ‘Don’t worry about the outraged hipsters, they will soon go away and find something else to rant about. They all come from a group controlled by a total control freak, whom I might add is the laughing stock of the wider beer community.’

Jon Taguea friend of the owners said they had nothing to do with the post and it was by another person with access to their official page. 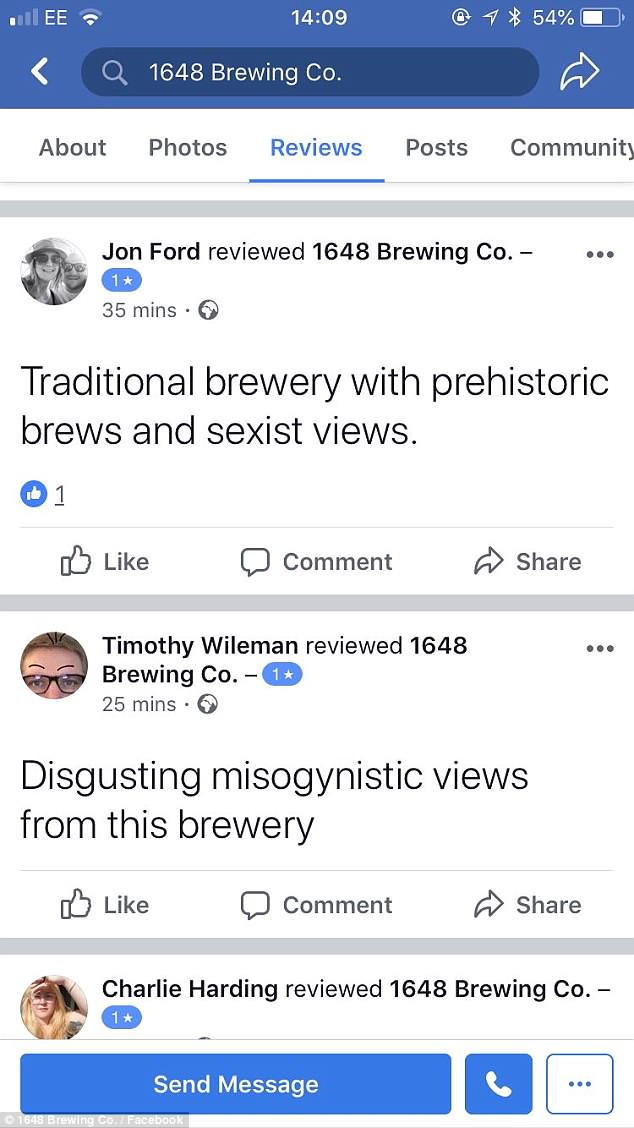 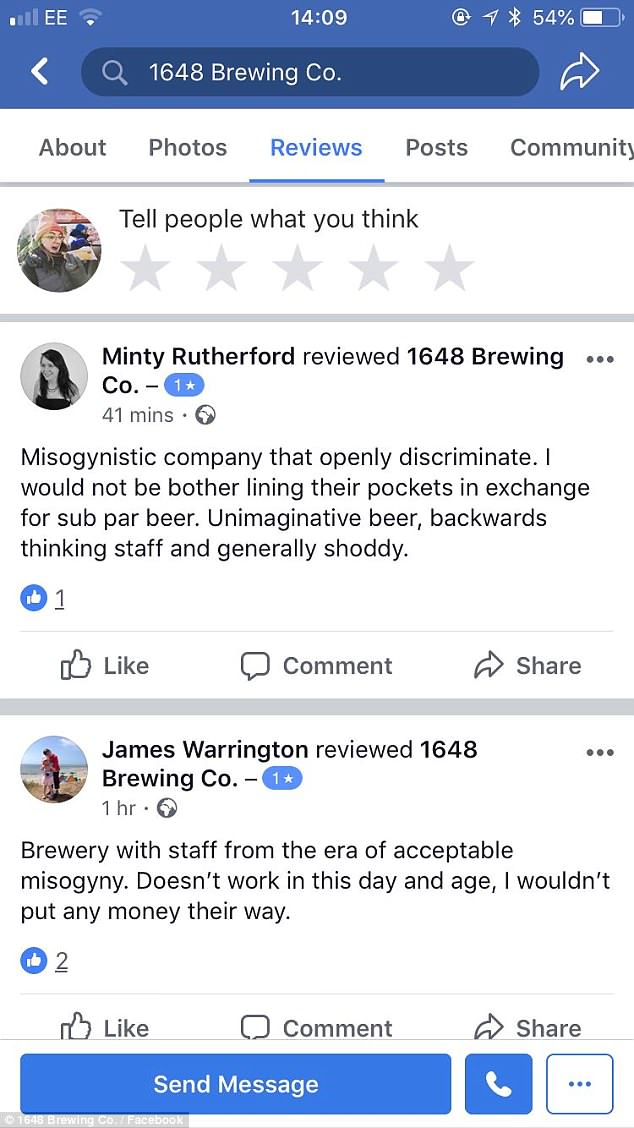 Many on Facebook told the brewing company based in Sussex they need to enter 2018 and that ‘dinosaur’ views on women were not accepted. More than 40 people complained

He said: ‘To be fair Bob and Owen had nothing to do with the comment that was posted and have removed it straight away.

‘This does not reflect on there own views and found the comment highly offensive.’

But customers said a denial through a friend and removing the post was not enough and called for an apology.

Sarah Victoria wrote: ‘They seem to think an acceptable marketing technique is to alienate half their customer base. You can delete a post, but you can’t delete the intent..’

It comes after the brewing industry vowed to clean up its act following a series of sexist adverts.

A Manchester brewery was forced to take down adverts showing women in skin-tight tops from one of its bars following a backlash.

The ads showed women with protruding nipples along with the slogan: ‘Somethings [sic] are better Extra Cold’.

Pink IPA from Brewdog, which was dubbed Beer for Girls and was introduced to take aim at the gender pay gap, was also slated in March.

They have not yet responded to requests for a comment.

Covid Europe: How France, Germany and Spain are dealing with coronavirus