Towns have been evacuated and hundreds of residents warned to escape as a record number of fires rage across New South Wales (NSW). The New South Wales Rural Fire service has issued warnings for 17 fires, telling residents to leave and seek shelter.

In total 85 fires were raging across the state as of Friday, November 8.

NSW Rural Fire Service confirmed that at 9pm [10am GMT], there were still 85 fires burning across NSW, with 49 yet to be contained.

The fire service tweeted: “15 fires remain at Emergency Warning, although weather conditions are beginning to ease.

“Despite this, there are still many hours of difficult firefighting ahead for our crews.” 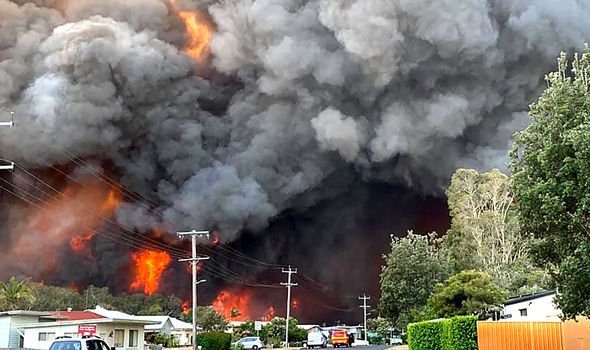 National broadcaster ABC said the fire service has received many reports of people being trapped in their homes.

“We have never seen this many fires concurrently at emergency warning level.”

Mr Fitzsimmons added there have been more than 1,000 firefighters and 70 aircraft deployed by authorities to save “as many people as possible”.

Mr Fitzsimmons said: “It is a very volatile and very dangerous set of circumstances that we are experiencing right across these fire grounds in New South Wales.” 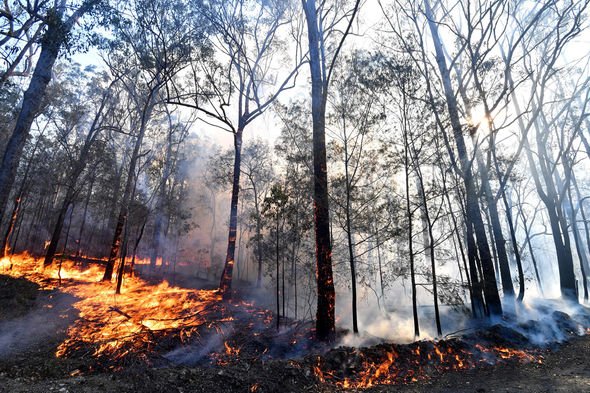 Where are the bushfires in New South Wales?

Emergency responses have stretched along 621 miles of Australia’s coast where the fires are spread across.

The map issued by the fire service shows the locations of the devastating blazes.

The areas affected by the fires include Tenterfield, Armidale, Clarence Valley, Port Macquarie, Nambucca and Kempsey according to Nine News.

At least five schools in NSW have closed due to the flames, and major roads and highways have been forced to shut.

Mr Fitzsimmons said the fire service has received reports that several communities have been impacted by the blazes, including reports of injuries to residents and damage to buildings.

He said the “high concentration of fire and extreme volatility and extraordinary fire behaviour” was being driven by a “drought-stricken landscape” and hot, dry, windy conditions”. 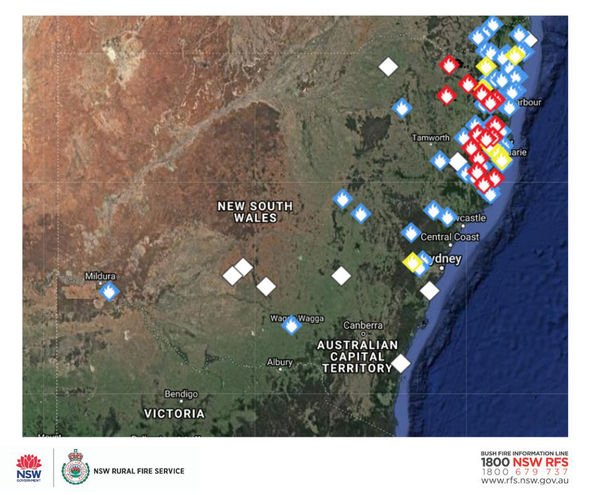 Temperatures peaked at 49.3C at Marble Bar in Western Australia on January 26, 2019.

Queensland and New South Wales are prone to wildfires in spring and early summer.

Spring in Australia lasts from September to November, with summer taking place from December to February.

There are currently 50 bushfires raging in neighbouring Queensland, with residents across several areas told to evacuate as properties are under threat.

Queensland towns including Cooroibah and Tewantin, with a combined population of around 6,500, were told to leave by the state’s fire and emergency services.

Experts estimated the bushfires have wiped out about half the koalas living on a coastal reserve in New South Wales.

Koala Conservation Australia estimates around 350 koalas living on the reserve in the north coast town of Port Macquarie have died in the bushfires.

This is one of Australia’s worst bushfire seasons with a record number of emergency warnings and firefighters battling dozens of fires.