There is a scramble to prevent a catastrophe and mass deaths in Bangladesh refugee camps.

The annual monsoon rains are forecast to trigger landslides and floods, endangering at least 200,000 people living in shelters perched on the steep hills.

Nearly a million people, who have fled violence in Myanmar, are crowded  in the world’s largest series of refugee mega-camps. I’ve worked in Iraq, in South Sudan and refugee camps in Europe but I’ve never seen anything like it. 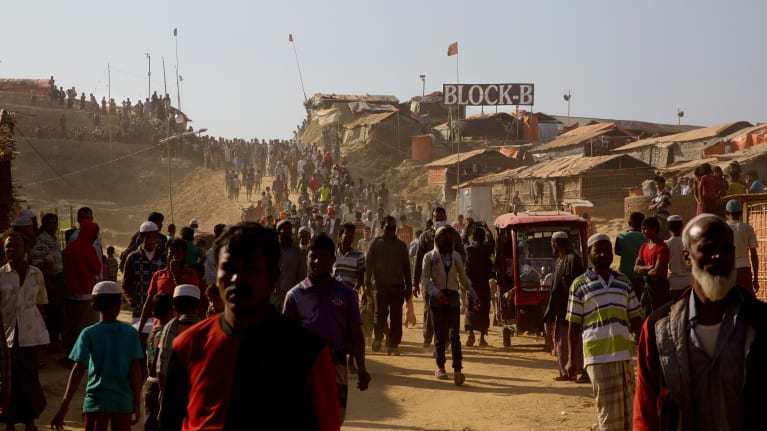 Flash floods could destroy the camp’s toilets, clean water supplies and narrow pathways. Delivering crucial health services and other aid will be near impossible, with a very high risk of deadly diseases.

It pains me to see this disaster within a disaster unfolding. People who’ve lost everything face losing the little they have all again.

Parents have done their best to make new homes, providing a life for their children. Yet they are living in the world’s biggest maze of the most basic shelters; bamboo and plastic sheets held together with twine. Pieces of cardboard and garbage bags patch holes.

The forest that covered these slopes is being denuded at the rate of four football fields a day. Many of the trees and their roots have disappeared in puffs of smoke, used as cooking fuel to help families survive on meals of a handful of rice and lentils, if they’re lucky.

I’ve seen how the sheer scale of the deforestation in the camps exposes women and children to huge safety risks. Children walk all day, travelling further each week to find wood for fuel. 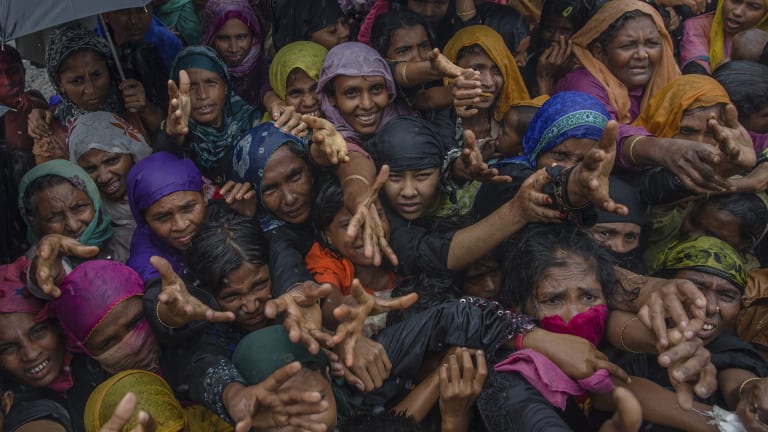 Rohingya Muslim women, who crossed over from Myanmar into Bangladesh, stretch their arms out to collect sanitary products distributed by aid agencies near Balukhali refugee camp, Bangladesh.

The people living in the camps are trapped. They are restricted to the camps and can’t go home.

This will be no quick fix. I’ve met families who have been here for 30 years. Their adult children were born in the camp. This is the only home they know.

One of the reasons that camp homes are so flimsy is that aid agencies have been permitted to provide only "emergency" materials, such as plastic sheeting, rather than more sturdy  concrete, brick, timber and corrugated iron.

Fears are growing that it will not be possible to engineer a way out of a potential catastrophe.

Sobering messages are being circulated by some agencies to camp residents: “In the case of a severe storm or cyclone there will be no mass evacuations.”

Nevertheless, thousands of community leaders and heads of households are attending Red Cross Red Crescent training to help them survive. Lowering shelter roofs; reinforcing walls in a type of bunker.

Tie-down kits of rope, pegs and sandbags are being distributed for every shelter.

Mountains of materials are making shelters stronger; bamboo, timber, rope, nails, wire and tools such as hammers, hoes, chisels and wheel barrows. Everywhere I turn, people are busy building. The noise is deafening.

It is a little more than nothing, though it’s not much. The world owes the people in the Bangladesh camps a safer, more dignified future.

Don Johnston is an Australian shelter aid worker, coordinating relief for the International Federation of Red Cross and Red Crescent Societies in the Bangladesh camps.