An unruly tourist has been accused of animal cruelty after he was filmed smacking a baby seal multiple times with a slipper while the animal was resting on a beach.

Viral footage online shows a man, believed to be a Chinese national, shouting ‘wake up, wake up’ and repeatedly hitting the brown fur seal’s head and body while a woman is heard laughing as the mammal desperately runs towards the sea.

Millions of Chinese web users have reacted to the video with outrage after the clip was shared by an animal welfare organisation on social media. 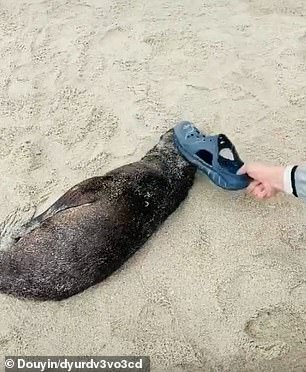 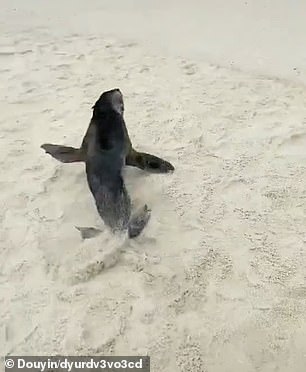 It remains unclear when the clip was filmed, but accounts suggest it was taken in Namibia.

The original footage was thought to be first uploaded by the female traveller onto Chinese TikTok-like Douyin before being shared on Friday by China Cetacean Alliance, an international animal protection and conservation organisation.

The video allegedly shows a male Chinese tourist hitting the baby South African fur seal a dozen of times with a slipper before the animal suddenly sits up and scrambles to escape on the Cape Cross beach in Namibia of south-western Africa.

A woman can be heard in the background laughing and saying: ‘Your mum is calling you to wake up!’

The animal welfare organisation claimed that the video was made to seek attention and attract views on social media.

China Cetacean Alliance wrote in a post: ‘Not to mention the hidden dangers and the risk of contracting wildlife diseases, doing something so stupidly and evilly to gain traffic online really discredits Chinese tourists as a group.’

It continued:’We hope that all [social media] platforms can help guide the public atmosphere of respecting nature and science. Please stop promoting these sensational accounts that damage the country’s image!’

Screenshots shared by other web users show that the traveller had uploaded other videos in which the man continuing to attack a few more brown fur seals on the same beach.

All the clips have been deleted from the original uploader’s social media page.

The viral video has sparked outrage on social media after amassing nearly five million views since being shared on Chinese Twitter-like Weibo on July 3.

One commenter wrote: ‘Turning animal cruelty into a joke, this is disgusting!’

Another one replied: ‘What’s wrong with him? Really embarrassing for Chinese people. They should be blacklisted and banned from travelling.’

A third web user said: ‘This is so outrageous. This is exactly why Chinese tourists are so disliked in other countries!’